We were talking about this earlier and I just want to share what I have come up with.

I use Ardour to record audio from several synthesizers and drum machines. All devices get the clock from an Arturia Keystep sequencer.
I do one take with the foundation and might record additional single tracks later.
My problem was that working with the pure audio made it difficult to cut out or rearrange parts later.

Here’s what I did:

I have one of the sequencers play a simple pattern (¼ notes) to help me identify beats and bars later and record that to a MIDI track (“beats”) in Ardour.

I did not set Ardour to external sync but only connected Ardour’s “MIDI MMC” MIDI IN port to the main sequencer OUT so Ardour catches Start/Stop commands.

I am not in-depth into audio-wave tracks as I’m sticking with midi-synths for now – but I should have to say there’s an easier way than this(I recently saw a tutorial about this). If the tempo is not that much different going into the audio you wouldn’t need to be using multiple cuts and re-arrangements to do the primary line-up, instead there’s an easier way with using tempo marks and dragging the meter ruler. It’s hard to explain this procedure technique without a demonstration, so here is one,
– it’s 12 minutes though I think it’s worth to know about as cut-rearrangement is much more time-consuming. It is also a tutorial from HC consoles, so I guess this would make it the official way for lining-up the audio track for the change of tempo.

- near the ending of the tutorial, the narrator shows how additions of midi things lines itself up automatically with the rest of the tracks.

Thank you, dragging the meter that way is very helpful and I did not know that it is that easy!
That definitely helps!

you can also use shift+drag the tempo line as well.

you might find this post that I created a while back relevant which was originally an answer post to a workflow pertaining to the ‘edit point’ vertical line. This feature is getting upgraded in the upcoming ardour 6 and you might find it helpful. ( Edit Point Behavior ). One thing though with your audio-track setup is that the audio clips are set to opaque, and if you watched the video, it demonstrates how to set them transparent so that you can see the timing grid more visually…

Also the idea that here I can change the “transport clock” visuals with a “timecode offset” for the editing cursor might interest you…
https://manual.ardour.org/ardours-interface/using-ardour-clock-displays/ 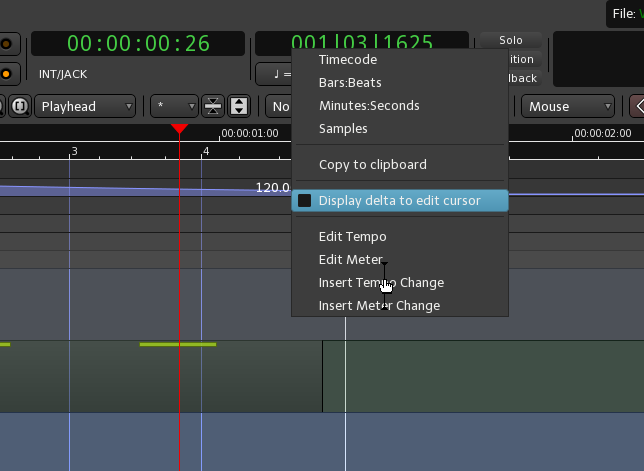 ^ accumulating different things I would tend to be using techniques from HC along with a snappy-edit-cursor line while keeping a simple visualizing “timecode offset” to more easily track where changes are needed. It makes it easy for me on the eyes and imho is less mentally straining as I only have to work with the same short range of timecode numbers across the entire track… I just move the playhead at the cursor’s point with a short key and can do various operations, let auto-return return the playhead, and verify the wave-data/beats in quick-editorial ranges for bar/beat sections.

I would like to see a tutorial using this method because it is daunting to work with large timecode numbers-- to me it becomes less straining because I can then focus on a small section’s melody, bars per beat, or patch-up whatever short-section I want to work focus… If I need to come back to some place later, I can just use the “marker” area and use the ‘show marker vertical lines’, or flexibly use other types of markers… I find the tactic of showing vertical lines performing to my favor and may not be so for everyone’s case… Here I like working visually more so than keeping track of timecodes, I suppose you do as well because you’re making that additional track to use as a visual more than with timecode numbers… so I suggest checking out alternatives – because imho you shouldn’t be needing to create additional tracks for beat-marks, as that’s what the time-grid is created for. The problem in your screenshot/setup is you’re not setting those audio clips transparent so that you can see the grid line in back. I intend to be working things this way, along with some other helpful shortcuts to work effectively.

I’m wondering what other methods users are using for aligning audio things since I am having a very hard time finding methods like this… I suppose they probably don’t know of the above official method as it is not up-front mentioned anywhere. I only stumbled upon by accident about two weeks ago as I learn my way more into ardour+mixbus things…

fwiw, the video tutorial is not the “my way to do it”, but is rather from HarrisonConsoles which sponsors development of ardour, so I suppose this is the “official” way going with both ardour+mixbus.