Ok, so back in This thread I asked about clip lists for when editing radio-documentary/features with ardour.
I got the good advice to bounce to sources-list. Now I have been trying this workflow for a new project, and it so far it’s working out quite OK.

I am tidying my raw-“tape”, selecting the various bits to use later and bouncing to sources-list, so I can drop them in to montage later.
And in doing this, I have discovered two features I’d like to request, or hear about the possibility of implementing:

Maybe the functions I wish for are better suited for a sort of “custom-rages”-list? 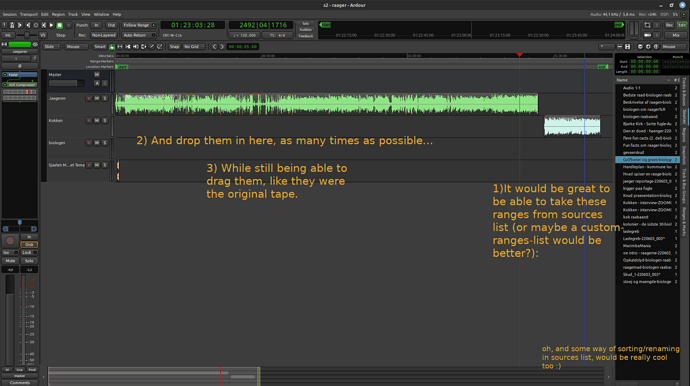 The Sources list is actually a list of files used within the session, and so unless you really have a 1-to-1 correspondence between files and clips, this is not the list to be thinking about. We also do not allow you to rename files in this way.

However, the Regions list seems rather close to what you want. I suspect the issue is that it gets too cluttered?

Thanks for the response, Paul!

It will forever be one of the coolest things, that you guys are so helpful and on here taking the time to respond and help. Much appreciated!

My gripe with the Regions list is indeed that it gets way to cluttered for this specific use case, as it doesn’t seem to have “awareness of redundancy” built in.

To me, at the moment at least, Regions list seems to work in a somewhat similar way to Sources list. But the Sources list at least lets me make partial new files from regions, that I can den drag in and reuse time and time again - even after I’ve deleted the master tape from the tracks (still keeping it in the list) without cluttering the list of bits I might want to add to the montage.

My wish is for a function that would behave like the Sources list - mostly (in that any regions added would only appear once, like sources) - but in a way that let me add regions to the list in a non-destructive manner.
That way, one could import two or three long pieces of different tape to sources list, put the raw-tape on the tracks, find the ranges that would be good to use, bounce/send them to this list, remove the raw-tape from the tracks and then start bringing in the various selected regions while still being able to adjust the pre-and post runs of a chosen clip to make the editing more fluent.

for anybody following this thread (if any?)
I just discovered that the sorting is already accessible in the Sources-list. I thought I couldn’t rename tracks, but turns out it’s possible. Just double click an item in the sources-list, and rename. Now it’s much more easy to group different story-pieces and music together and then sort the list by name.