Is there a sampler plugin that keyboard maps?

Am pretty sure I have somehow clicked past it in the past few hours looking for one, but if I do a search for ‘Linux Sampler’ nearly all the results are for linuxsampler, which I believe does not keyboard map wav samples.
I have the kxstudio repos but cant seem to find a plugin that can load wav files and then allow me to play back the sample across my midi keyboard properly, the samplers I have tried just speed up or slow down the sample which means all my wav samples can only be used to play a couple of notes. Might not have tried so hard today to get a result but have just paid some of my hard earned cash for a load of wav samples… All revved up and no way to play…

Linuxsampler does do keyboard mapping of samples. It loads in SF2 and GIG format files which are, specifically, region-mapped instrument files containing multiple samples.

If you want to create these yourself from raw samples, you’ll need a tool like gigedit or swami instrument editor.

Thanks, but my problem is with the collection of single note wav files that I now have. When I spent time yesterday looking for a sampler which could keyboard-map using wav files, they were all Windoze/Mac, I could not find anything for Linux. Am using Ubuntu STudio with the kxstudio repos and so spent several hours trying every single plugin I had.

Some very pleasant surpises in there, but not one sampler that would map wav files. Are wav files becoming redundant? I have a decent collection of sf2 files, but it is very hit and miss as to which ones work (tend to use calf-fluidsynth with them) and I would very much like to try all these shiny new wav files that I now have…

TAL Sampler can do mapping. It costs a bit (about 50 euros) but imo is worth it due to the lack of good samplers on Linux. I use it practically all the time.

edit: Btw of course do read the product description and try the demo out to see if it fits your needs. There’s no velocity mapping for samples for example, so if you need that, you’ll have to look elsewhere.

Both can load wav files, and create mapped instrument files (gig or sf2).

I used Swami fairly recently to create an instrument from recordings of 8 church bells from our local church, mapped to ranges. I’ve not used gigedit in anger but it does a similar thing. I think GIG format is a bit more capable than sf2, in that I think it does stuff like velocity mapping as well as key/range mapping.

Note that the Linuxsampler plugin is not a sample capture or editing tool. It’s really a server to support loading, organising, and playing back of instrument definitions. It can use both sf2 and gig instruments (and some other formats) but you will need another editor (like gigedit or swami) to create those instrument definitions, including all the keyboard/range mapping.

And you will also need a tool like qsampler to load and configure the samples into the linuxsampler plugin. Or, if you have created a sf2 file, you can also use fluidsynth.

Wav files are definitely not becoming redundant or obsolete: wav is the baseline uncompressed file format used by almost everyone in one variation or another.

Here’s a a screen shot of me using Swami to edit and map bell samples. In this case this isn’t the local church, but a set of wav samples recorded by someone else from a bell tower in Devon. 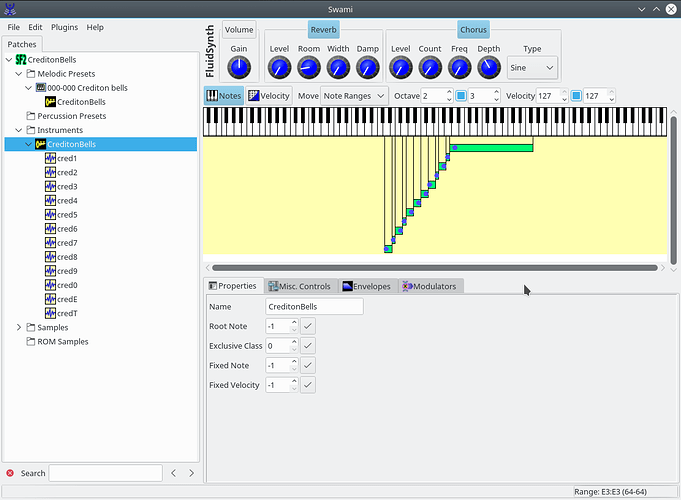 Had a look at Tal yesterday, thought it was nice, but would rather spend on a bigger sf2/gig/sfz library than a plugin like that.
Starting to think that I may have my answer now, it is looking like I would have to spend a lot of time turning these wav files into something usable, not looking like I can just drag an drop these into a sampler, although I will take a closer look at gigedit and swami (thanks Keith), but suspect my expectations of a plugin that makes this as simple as selecting a sample and just using it was fanciful. Mmm… should have researched this before buying the samples I guess.
Am somewhat surprised that this sampler ‘hole’ exists in Linux (there seems plenty of choice in windoze), just about everything else is so very well catered for…

I’m not sure there’s any plugin which will take a set of samples and automatically map them. I believe all of them require some sort of user input to define which region the sample belongs to. I think the main difference with plugins like TAL is that the editor is built into the plugin. To me that makes it negligibly easier.

The output of Swami or gigedit will be a portable instrument file you can load into linuxsampler, Qsynth, or any other compatible player or plugin.

Editing instruments with Swami, once you understand how it works, is pretty easy. Of course, if you have 88 individual samples and need to map them to each key, that’s going to take a while regardless of editor.

This may be useful to watch. 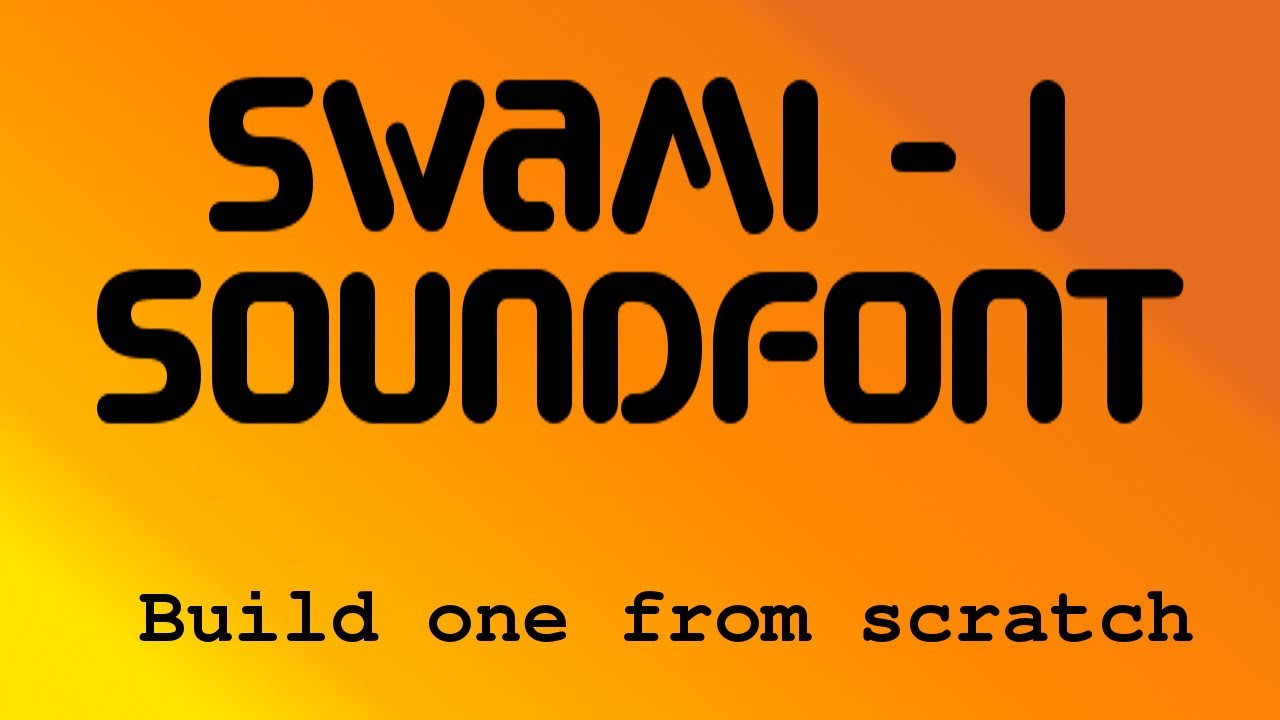 It turns out I was incorrect, Swami and sf2 formats do support velocity mapping between different layers. very cool!

Think I am going to abandon this… I have hundreds of 1-note wav samples and this is looking like a very large number of hours to process them with the tools that are available in Linux. Will put this down to experience (or lack of) and tuck these samples away for a later date.

Am going to stick with sf2 for a while as it is as simple as drag and drop with these and that is all I want with samples. Perhaps if I get deeper into music making I will be ok to spend the time processing my sound files but right now, just wanna make music. Best analogy I can think of, I want to just drive the car for a while before learning to be a mechanic…
Thanks for your help guys…

Fair enough. I just want to point out that it would almost certainly also be a “very large number of hours” to process them with the tools that are available on Windows or Mac. It’s basically the same process, unless there’s some plugin out there I’m not familiar with (which is entirely possible).

Dont know these programs, but there were many like this I found while searching yesterday…

Here are the Best Free Sampler VST Plugins online that can be used with FL Studio, Reason, Ableton Live, and other VST supported software.

Wow, just intended to pop a link there, but its turned into a full ad… !

I don’t believe that any of those sampler VST’s will work on Linux (without the usual shenanigans involved in running Windows plugins on Linux).

And I also don’t believe any of them will, fundamentally, be any better at doing what you are trying to do than the tools available on Linux:

Some of these are just soundfont players, similar to fluidsynth or Linux sampler

Others on this don’t seem to support much more than fairly basic sample playback with no mapping, but coupled with other tools, like envelope, filters and modulation, similar to samplv1.

The ones that do support keyboard mapping will still require you to do “a very large number of hours” of work doing that mapping if you are starting with sample files containing individual notes as wav files, just as you would with gigedit or Swami. Although I personally think that you should be able to pull together a single instrument’s samples into an instrument definition in Swami in less than an hour.

Yes, there’s a lot more choice on Windows (and, frankly, a lot more polish) but, ultimately, it’s a choice between lots of tools which all do much the same thing, in slightly different ways.

And, fundamentally, I don’t see any of these is going to do what you originally were looking for: to do keyboard mapping of multiple wav samples into a cohesive instrument definitions without you actually doing any work.

I think what you imagine to exist, doesn’t, on any platform.

You can give Bliss a try: https://www.discodsp.com/bliss/

Hey Paul…
Yep, I know… spent hours looking for something I could use as a plugin in Ardour, no luck there… Certainly will never return to windoze again, very happy with Linux (3 years now, never looked back). Open source all the way for me (sorry synthesis, Bliss is proprietry) but I am a little surprised that there is nothing in Linux that can do this, it can clearly be done ‘manually’ and ouputed using gig or sf2 etc…

Most things that can be done manually are often automated into these lovely plugins, I am guessing not so straightforward for wav files or someone would have done it. Not sure I should ask why, suspect the answer would probably melt my brain and dribble it out onto my nice keyboard. Had a look at the physics of sound before and its complexities were many and too deep for me to get into without a spare year or 2 to study it…

Thanks Robin… The 1st and 3rd ones are drum samplers, seem to have plenty of choices for those already in the plugin collections I have although I am starting to use hydrogen a bit more.
samplv1 was the plugin I had hoped would do the job for me but it does not map across a keyboard (unless I am missing some aspect of it?) and it only speeds up or slows down the sample in order to alter the pitch. This means there are only a few notes either side of the sample pitch that are usable.
Appreciate the suggestions though and I like some of the plugins from that german site…

Redux is the only good sampler on Linux
Renoise Redux | Renoise

Why would it take long? Just use 1 sample per octave.