How to set up MIDI shortcuts in Ardour?

I have Alesis v25 midi and I am trying to set up som shortcuts for make my life easier but it seems that it does not works properly. I did make it work once but now it does not working and I can not understand why.So,
I connect the midi to my laptop and I start ardour. I create a new session wit this settings: 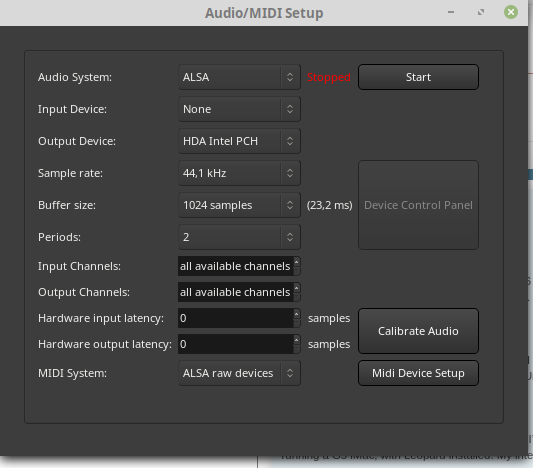 I read that to create a shortcut I have to press Ctrl+middle mouse click then a Operete controller now is showing up and then I press the knob or the button that I want to control.
In my case it seems that there is not any input.
I checked the MIDI tracer to see if ardour get the signal and it seems that does not get anything.
(But If I create a track and connect it to MIDI throw MIDI input it works fine)

Also my settings are: 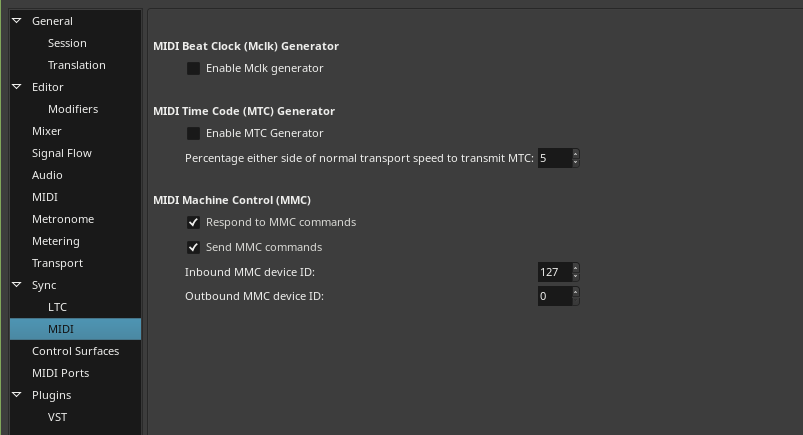 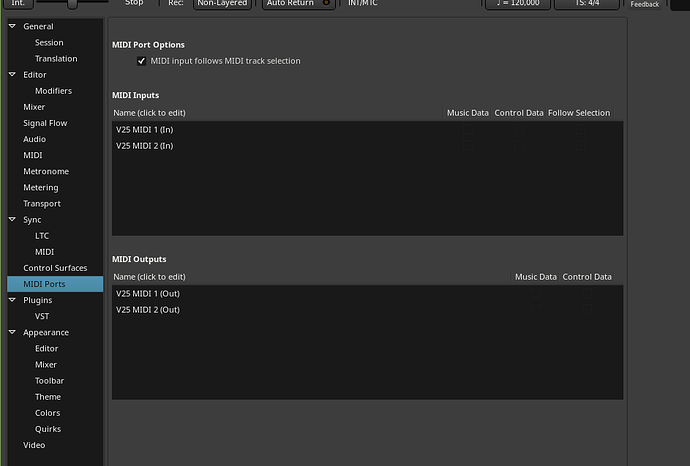 Can anyone help me with this?

The first dialog window (new session) you show is for audio. Click the Midi Device Setup button in that window. 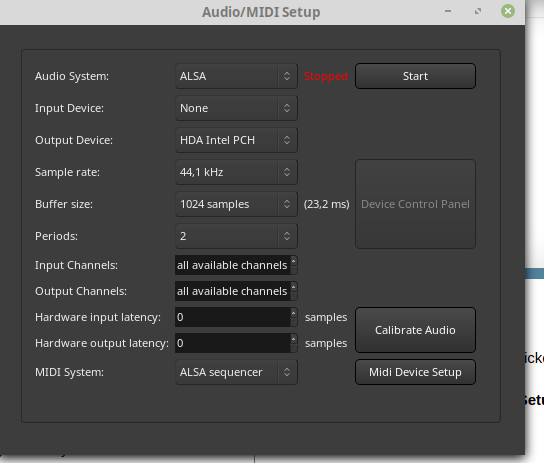 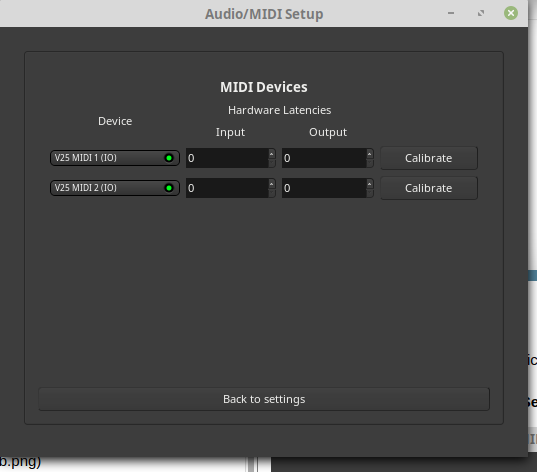 For some reason I have 2 midi interfaces but only the first one is working. I do not know the use of the other.

And then I had to set up the connections like this: 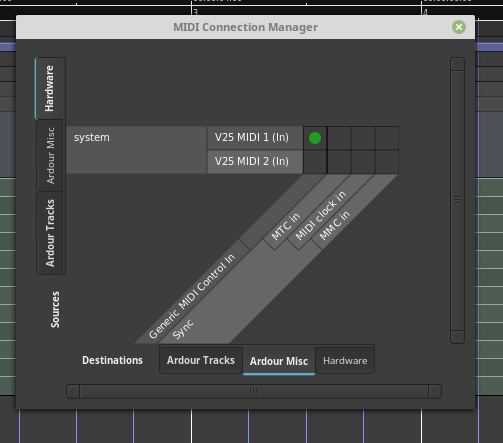 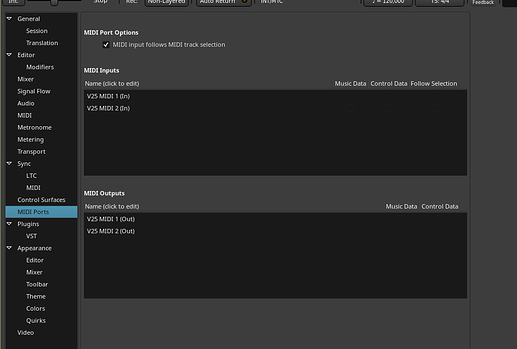 …
And then I had to set up the connections like this:

^ Go to Preferences/‘Control Surfaces’ – try the ‘Generic MIDI’ surface definition, and choose the ‘V25 MIDI 2(In)’ in the ‘Show Protocols Settings’.
(the following is a screenshot of how this looks like on another system)

When you do "ctrl+middle-mouse-button’ on a bindable/Midi-learn control on the daw, such as the ‘play’ or ‘stop’ button, you can set things… by turning a ‘control’ from the Midi controller (your hardware keyboard). If Midi-learning does not work with the chosen ‘control surface’ protocol, then try the ‘Mackie Control’ control surface controller instead. (from the Preferences/‘Control Surfaces’ window)

I read that to create a shortcut I have to press Ctrl+middle mouse click then a Operete controller now is showing up and then I press the knob or the button that I want to control.
In my case it seems that there is not any input."
…
For some reason I have 2 midi interfaces but only the first one is working. I do not know the use of the other.

Those two things that show up as Hardware devices, those are referred to as “hardware midi ports”.

From what I understand the ‘Generic MIDI Control in’ pertains to the Ardour program as a whole – and relates to the ‘control surface’ << this is a fancy name that translates easily to ‘Midi Controller’… just consider the two equivalent for now, it’s easier to understand it as an “external” piece of midi equipment.

The problem here with ‘control surface’ settings, is that the ‘Midi Connections’ window defines the settings better in a particular fashion that should be noted since it was opened – if you happen to “change” the ‘control surface’ from there – for example set all hardware midi ports, and then go to ‘Preferences/Surface Control’, choose protocol, then choose ‘Show protocol settings’ … the “pulldown” of one option(from the Preferences window) is not “resetting” and “unselecting” options that have been set from the ‘Midi connections’ window.

hope this helps (and see the later notes)

thanks. I think I am learning something in the process here, discourse provides the ability to enhance paragraphing things, so I’ll try out one its nice features of summarization.

Further notes – separated because I do not want it to sound too confusing above^, expand the following summary notation for extra tips which should solve the problem I think @joynstar is going after. I never tested the following because I do not have “that hardware” but I am pretty sure it is the solution that is being sought because it looks like a simple Midi Controller, and so it shouldn’t be too difficult to resolve the MIDI-Learn/binding issue. (“MIDI shortcuts” is a misnomer – actually the request pertains as “MIDI Learning” because “controls” from the “Midi controller” get binded to “controls inside the daw” << easy vocabulary – if someone knows a better to phrase it, let me know… I think I got this right.)

@x42 , the reason why I add commentaries that are lengthy is so that other users can correct me as I am learning things. I am pretty sure there’s something very weird going on between the Midi connections even into the Ardour6-prealpha – and we are not yet able to send bugtracking reports about it yet – however this issue is also found in Ardour 5.xx – I don’t think it’s a “design”, I think it’s somewhere between feature and bug, I’m too new to Ardour to know really what the “intention” is. However when I choose “disconnected” as I illustrated, then the Midi connections gets fully updated as expected. < Design or bug? I’m wondering if I can make a feature request for this into Ardour6 prealpha – if this is already resolved in the upcoming release then I suppose I would be eager to try it out.

@joynstar, also if you check the manual of the Alesis v25, it mentions it sends CC-* things. I suppose that means it sends it with "V25 MIDI 1(In)”. Midi is very versatile, I think you would want to use the ‘Midi Input follows Midi Track selection’ as I mentioned I think on your other topic for the same hardware Problem with midi sound
– your hardware is connected via usb, and there is more than 1 midi port from it. 1 is for note-on data(with some CC-* messages), the other is for the ‘control surface’. From memory, you cannot service a hardware midi port as both a “control surface” and as a midi note-on port. – afaict this is not possible.
– I hope the illustration of the ‘MIDI CC to Note’ helps solve the issue of not requiring an advanced MIDI-Learning plugin, instead you can use any digital synth along with it.

Easier said than done, but I also think there’s a possibility that there might even be a bug here – and I think @joynstar you’re attempting things caught within this potential bug/feature that won’t resolve on its own::: the workaround for now afaict is to select “Disconnected”, and then choose a hardware midi input source in Preferences/'Control surfaces'+protocol+"Show protocol settings" (see above pictures)