Fader, or other effects, in a group

Hello.
I have a tune with several tracks which I grouped together.
Let say, there are some tracks grouped for the orchestra, others grouped for guitars, and so on.
I need to add the same fader and the same effect to each group, different from group to group but identical for all the tracks in a group, I would like to know if there’s a way to add these to a group instead applying to each track since it’s a tedious process.
Thank you.

Create a bus and send the individual group tracks there. Then put your effect on the bus. This is standard practice with daws because it makes controlling the effect easier (than controlling multiple instances of a effect) and it takes less processing power (your computer can handle larger sessions).

You can just create the group, then right click on the group tab (left side of track headers in editor; top of strips in mixer) and choose “Add New Subgroup Bus”. This will automatically add the new bus, disconnect all the track outputs from wherever they were going and reconnect them to the new subgroup bus.

For mhartzel’s second suggestion, the same right click will let you choose “Add New Aux Bus” and will both create the new Aux Bus and add aux sends to every member of the group. You will need to decide whether to make this pre- or post-fader, both have their benefits and disadvantages.

Thanks guys.
Yep, it came to my mind adding a bus. I thought it last night. Instead sleeping, at night I think about stuff…
Paul, I ddon’t know about aux busses, anyways I always put any effect I use in each single track before the fader. I mean the volume fader.
Is this better or worse to do?

Thanks Paul, I didn’t know it’s that easy. I have always manually created all my busses before. This is way easier than on any DAW I have used

Hi mhartzel,
I already created the groups, that’s quite easy thank god. The problem is the bus. I tried to right click on the group tag on the left chosing add new bus, add new aux bus, pre and post fader, but nothing has happened.
To check it out, I tried to add the automation on the connected tracks but I saw nothing has changed, I should work them up separately for each track.
Which is a work I would avoid doing.

Are you sure nothing really happened. At first it may seems so, but you should see a new track at the bottom of the other tracks on the edit window. This is the bus you created.

On the far left side I have opened a single mixer strip with shift + e and it shows Audio Track 1. You can see the volume slider of the send that is sending audio from Track 1 to EffectsBus_1. The send slider is closed all the way.

Here is the screenshot: 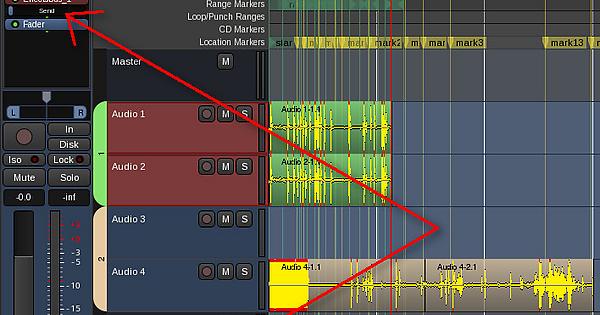 Definitely. That’s why I asked about it. As I klicked on any bus option, nothing has been created.
I still have the same tracks and groups I made.
I tried it again but nothing happens.
Here’s the link: https://ibb.co/k4jN1Q
In the end I can also do the work by hand, since there are only those three tracks I have to adjust.
Though if I had the chance to do the job just once, it would be better.
I’d like to ask something else but I’ll open another topic so not to mix it with this one.

Yes, sorry. I forgot to click the group. As you can see, nothing happens.
I tried them all: add new bus, add new aux bus pre and post fader. Okay, then you just have to create the busses manually. By the way, which version of Ardour is this ? Looks like the 4.x line.

I have the 5.5.0 Haven’t upgraded yet to the latest version.

Ok, inserted manually a midi bus, since the tracks are midis. Connected the tracks to the bus and added an automation. Since it wasn’t working, I don’t know why, maybe because the extremely difficult connections, I disconnected the bus from the group, then removed it.
Result: I lost the three orchestra trackes. They got removed together with the bus, even though I disconnected first.
So. Is there a way to get back the removed tracks in this damn fuckin stuff, or they’re lost forever?

None of this should be necessary. Find me on IRC tomorrow (GMT+1 timezone), and I’ll try to get you straightened out.

The way 1 - to add an audio bus with effect and send signals to that bus:

The way 2 - to add an audio bus without any effect and connect outs from every desired instrument tracks to this group bus, then send a signal from the group bus to the effect bus:

I’m actually out of town and I only have my computer, not the sound card.
Anyways I remade the lost tracks.
Cool I saw your busses and both are audio. I was applying a midi bus to midi tracks. I followed a kind of guide on the tube as well, but it didn’t work. Also, the Ardour version in the video was older and only had “bus” instead of midi bus and audio bus.

@telover, if you want to add some audio effect to group - you need an audio bus (that’s why I use audio bus).

If you try to use a midi-bus - this mean, that your midi-bus will receive midi signals from your midi tracks. The source midi tracks must be empty and your midi-bus must have an instrument loaded inside. All the routed midi signals will act to the midi-bus instrument. You can look about a midi routing at the beginning of another video I’ve made before (https://community.ardour.org/node/14375):

Thanks for the help, cool. I needed a bus only to work with the volume fader on three or four tracks. I have to increase the volume in some points, and decrease it in others. That’s it.
But the tracks are all midi and contain the orchestra instruments.
I already solved it since I have to remade the tracks after I lost them. I’ll check the video and try to keep it for the next time.

This thing is starting to piss me off to death. Cool, I’ve copied literally what you did in your first video. Identical. The only difference is I have the master track on top of all the others instead at the bottom.
I created the bus but I don’t listen a f**** d***. I’ve tried several effects. Nothing.
I’ve added the same effect to a single track to try, and it works. So it’s this f******, damn, s**** busses.
The more I use it, the more I find it’s a pain in the ass.