Connect and synchronize Hydrogen and Ardour

To synchronize Hydrogen and Ardour

Thank you. Such instructions are very helpful!

With pleasure! I’m happy to share the clarity I found on this yesterday. Statistically speaking, in half a year I’ll be googling how to connect Hydrogen and Ardour, so why not making it easier for my future self x) Hope this will save other people some time too.

Generally there’s two steps for each jack-aware application to use jack-transport.

you didn’t specify that the jack-transport also needs to be set in Hydrogen.

though there’s a problem I think as I recently learned for basically any time there needs to be a full synchronization of the timeline between two jack-aware applications, and that is the limitation of the change-of-tempo which is kind of broken.

The jack-transport does not have a very definite “tempo change” support in its specs, it says so over here,

https://github.com/jackaudio/jackaudio.github.com/wiki/TransportLimitations
“Tempo changes are underspecified
The current implementation might actually be sufficient to support tempo changes, but the API is not entirely clear on how this should work.”

So testing here, apparently the only way that a tempo-change works correctly between Ardour and Hydrogen, is if Ardour is provided as the Jack-time master.

My recommendation, and afaict is to try to use Ardour as the Jack-time master as much as possible, in order to mitigate any problems later…

^ from this table, you can see that Hydrogen is suppose to support BBT — A test I have performed here is Hydrogen 0.9.7-6 fails to pick up the “change of tempo” sent from Ardour. Possibly further with other thing-question marks as indicated on this chart – so likely Hydrogen is not fully BBT-timing compliant whatever this encompasses… – this can supposedly explain why it fails to send correct tempo-change information to Ardour in the first place.

To make Ardour the Jack-time master, this option needs to be enabled::

(If the goal is to have a live-audio signal fed from Hydrogen that’s fine, but I think you should tell users that you should also disconnect Hydrogen from the system speakers, otherwise you get two sources playing the same audio data at the same time.)

Now, once the “JACK” setting is set over “INT/JACK”, the Jack-time Master setting can be done from Session > Properties | Timecode . (before or after does not matter – this other place for an additional jack-transport setting) 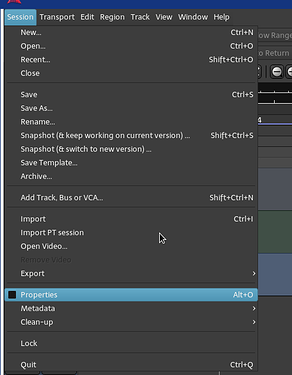 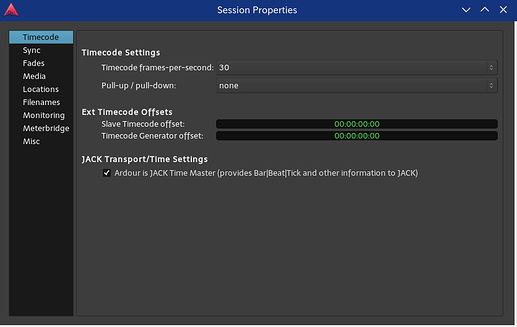 When it comes to setting up the jack-transport on Hydrogen, it has a ‘J.TRANS’ button available and it is obvious what it does, however do not enable the ‘J.MASTER’ button beside it as Ardour is already servicing as the Jack-time master.

You would also likely want to be working in “song mode” in Hydrogen to see if the playhead is synchronized and landing on the same bar|beats. The time of minutes+seconds can also be used to inspect synchronization with the jack-transport, though it is better to see if the “bar | beats” are also getting synchronized. (Hydrogen has a “pattern” mode — the time+seconds would reflect the same as Ardour if both have their jack-transport enabled.)

Apparently “jack-transport” is kind of broken for tempo-change, and I didn’t know about that until I read about it very recently. The funny thing is Ardour fails to take the “tempo change” test even when trying to perform it using the jack_transport command. I think most users are not using tempo-change which is why seldomly you would come across it.

Though there’s conflation going on here about what jack-transport tries to accomplish – it prevents the need to do audio/capture between audio ports. The question of audio-remixing of course is something that could be sought, though there’s three distinctions that users should make:: “jack engine”, “jack-transport”, and “jack time-master” settings. The OP post does not mention about the last two between the two applications so it is important to distinguish between them in order to use jack-transport correctly.

ahms, thank you for sharing! My intention with the post was to share the things I did to make Hydrogen and Ardour get synchronized and connected, and make it very short, easy and understandable - so that people who don’t know much about these programs can get it up and running as fast as possible. Now your comment is here, so it is of course a resource people can look through; still if we should add something to the post, I suggest adding mandatory “setup” things under the headline “setup”, and then we could add another headline: “other things to try if it still doesn’t work”, and then list things that can be helpful to try (f.ex. “if you have this problem, try this …”). In that way, this post will be a resource for people who are not experts and who are not aiming to fully understand the programs; they just want them up and running. So for me, I don’t want to add anything right now because I haven’t had any more problems myself yet; still, if there are things you want to add according to my suggestion above, please add these, especially “other things to try” that can help people without getting them overwhelmed by too much information.

I have better experiences with Hydrogen as Jack master and not Ardour (I think Hydrogen doesn’t work well as jack slave).
My 2cts.

ahms, I added your suggestion to make Ardour the JACK Time Master.
EDIT: No, I’ve changed my mind. It works better with Hydrogen as Time Master. I had to choose Time Master today for the synchronization to work, so I’m adding it to the post.

Today I used the click in Ardour, and recorded some tracks on that. Then I wanted to add drums with Hydrogen, and needed to synchronize the programs. When I put Hydrogen as JACK Time Master, I found out that the click in Ardour is lagging after the Hydrogen rhythm. I just moved all my recorded tracks a little bit to the left, and it was synced with the Hydrogen drums. After that, I recorded the drums. Then I had to move the Ardour tracks again to sync them with the drum tracks x)