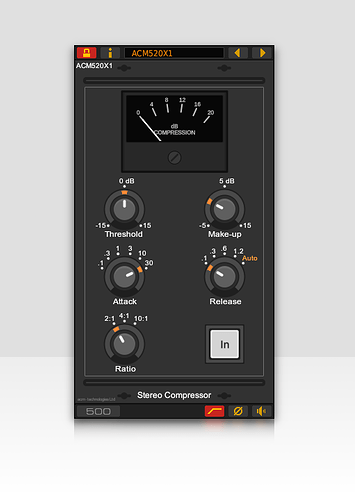 Inspired by one of the best-known recording console bus compressors, the ACM520X1 offers a wide range of settings from gentle 2:1 compression, often regarded as the essential ‘glue’ of a cohesive mix, to more obvious punch at higher compression ratios.
In addition, a switchable side-chain highpass filter makes it ideal for more modern bass-heavy mixes, without over compression.

Available as a VST2, VST3, and CLAP plug-in for Linux, and also as a standalone JACK compatible application. Demos are available free to download at:https://www.acmt.co.uk/products/download-acm520x1/

Wow! Great stuff! Can’t wait to throw some drums at it!

Fantastic! I’ll buy it when my wife gives me more money.

Thanks - it’s certainly been an interesting journey to decipher the secrets of the classic master bus compressor which inspired it. I hope it works well for you (you can of course always try combining it with the ACM500XA and ACM510XA for some extra analogue-console-inspired mojo

I wonder if it sounds like a bus comp. I always wondered how their Linux plugins work, I may try a demo

If you mean the quality of ACMT plugins, they are top notch. You can put a “brand” plugin next to it, and you still won’t regret it.

Is this the same company as overtone dsp.

Is this the same company as overtone dsp.

I wonder if it sounds like a bus comp. I always wondered how their Linux plugins work, I may try a demo

Demos are entirely free to download and try, and should be compatible with most recent Linux distributions and VST / VST3 / CLAP compatible host applications. The demo plug-in will fade to silence periodically.

They only run on Linux. Any builds for ARM/Raspberry pi etc

Any builds for ARM/Raspberry pi etc

Or the rest of the world…

Been trying to get some RPis for his home setup for a while.

Oh wow it’s still that bad. I wanted to make a raspberry pi setup for mixing.

I read online and the supply chain should be more stable in 2023 this year.

From what I’ve read it seems they’re doing everything they can to meet demand, its just the global supply chain issues that are affecting just about everything at the moment. I’ll look into whether it makes sense to do ARM builds (but it may not be profitable or cost-effective to do so)

Although it’s really amazing that you can now build an entire virtual analogue recording / (mixing) console which effectively fits in your pocket, when you actually work out the cost of all the other things you need to surround the RPi with in order to make it useful for audio mixing / recording, it can actually work out more economical - and give better performance - to just re-purpose an existing older x86 based machine, or get something like a small form factor Dell PC from ebay (I have one here as a test machine dating from a few years back and its perfectly capable of running all my plug-ins across multiple tracks / channels, in Ardour (or Reaper) without breaking a sweat, plus it already has all the storage I could need built in - which would be an extra with the Pi)

It may be better (Ebon Upton has said they are making more), but may not be solved entirely.

I understand, would it be difficult to provide ARM builds in general? not just raspberry pi. I know my Apple M1 computer is ARM based and almost all my plugins from waves, to Izotope etc I use are ARM based as well. raspberry pi aside I do think ARM is the future however I understand we are talking about linux which your plugins are only for linux which some may argue is a very small market. I dont know if it would be a massive task too provide ARM builds for linux ARM but I definitely would like to see more ARM builds. even for Harrison mixbus too if they ever do. they are other more powerful boards then raspberry pi. but who wouldn’t like a low power mixing setup meaning a machine that is under 10 watts lol. some companies provide ARM as beta/unofficial releases, I do like those as I would use it for testing etc

Recently bought your Linux plugins and have been blown away by how good they are.

Look forward to trying this one out. If the rest are anything to go by then this will be just as boss.

Is it possible to display an easy-to-remember name in these? Since there are a lot of these, I can’t remember which one is which.

I understand, would it be difficult to provide ARM builds in general?

No, I’m sure I could make ARM builds (I actually released some plug-ins for RPi a several years back but there was virtually no demand back then). The issue is testing them. For each new architecture (and plug-in format) each plug-in needs to be tested, and that can only really be done effectively (as in, to genuinely replicate the typical user experience) with real hardware. In the case of the RPi that’s just not obtainable at the moment.

My business model is entirely predicated on providing a ‘turn-key’ solution. I provide my time (and over 30 years of expertise in pro-audio, both analogue and digital) to, I hope, understand the hardware which inspires all the plug-ins in detail, and provide a solution which is tested to the best of my resources, simple to install, and for the most part ‘just works’. That’s the offer. At the present time I believe that combination is almost completely unique in Linux audio. Its simply not possible without the physical hardware to replicate the user experience.