Hey I am working with Ardour some years now for recording and some basic mixing. An now I am thining to start playing this some midi controller. I am looking Alesis V25, It seems simple and easy to use. The problem is that I do not know if it is possible to connect it with Ardour. I have seen that allesis has some software but I do not know if it is compatable.
Has anyone expirience with this kind of midi?

I have an Alesis V49 and it works very well with Ardour. I run a2jmidid -e & after JACK has started (I use a custom script, but you can add it as an “Execute script after Startup” command/script in QJackCtl). This command get’s the controller to show up in Ardour and allows me to use it as MIDI input and after setting it up as a “Generic MIDI” control surface, I can assign the knobs to faders for example. I’ve performed live a number of times with this setup and it’s been rock solid.

Additionally, I have managed to get the “Alesis V49 Editor” software working under WINE. I didn’t have to jump through any hoops to do so either. It loads and saves the configuration to the hardware perfectly in my experience. The software itself it a bit fiddly in the loading and setting of presets - check the manual before assuming WINE isn’t working.

Here’s a screenshot as “proof” (although I don’t have the keyboard plugged in right now): 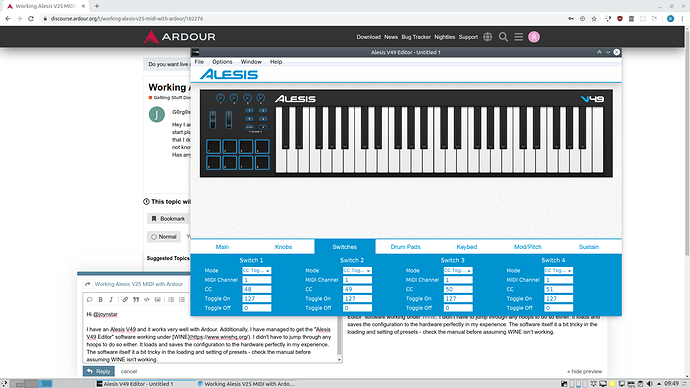 I am running wine-5.0-rc2 although I’ve used it in the past with older versions of WINE.

@robsco Thank you for your answer!
I bought it after all! It seems that Ardour can see the midi like a charm with out running any commands. I use the Generic MIDI control surface and at some instruments I have at pads a basic drum kit. I do not know if it is needed to run this command at all. Do you think that will make any difference?

A problem that I face is that when I have a audio channel and a midi channel I can not loop the audio and jam with the midi. It seems to me very weird bug that I am looking to fix. I will search it more this days and I will do a post for this.

What plug in do you use to controle the samples that the pads play? I know that ableton can do this with just a simple drag and drop. Do you now if Ardour has anything similar?

Also I will try to install the software from alesis with wine to see if works.
I will keep track of the progress for people to learn!