I’m curious to know what computer setups people here are using for audio production with Ardour on GNU/Linux.

I’ve been away from music for a few years but am coming back to it. The problem is that the CPU and motherboard in my desktop computer (where I’ll run Ardour) are too old and low-powered for low-latency recording, so I need to upgrade them. From what I’ve read on the Ardour site and forum, the CPU and motherboard are just two pieces of the puzzle, so buying the latest & greatest of these probably isn’t necessary.

As for an audio interface, I plan to use an RME Babyface Pro, which has a class-compliant mode.

The projects I’ll make will be modest, probably 24–32 tracks/busses of audio and MIDI with a few soft synths and common mixing plugins. I’ll primarily be recording only one track at a time. For this I’ll definitely want latencies at 10ms and below.

What hardware and software setups do people here use to achieve that?

I would suggest any computer system post 2013 would be a good start. For audio there is not much difference (for your requirements) to a modern 2019 system.

What you may want to consider is if you will use a Laptop- or Desktop solution. And the form-factor of the desktop solution. There are some fantastic mini-ITX motherboards out there that can be fitted in small cases. This also makes the rig very portable and low power (normally possible to run off 12v battery etc).

For Linux a desktop system in my experience is much easier to get working well.

I’m on a 2013 home-built AMD FX-6300 six-core processor, Radeon HD7770, 16GB ram and 3 physical hard drives all 7200rpm (not yet made the leap to SSD on my desktop!): 1 shared between Linux and Win10, another for all audio recordings and final one for all my sample instruments. For audio interfaces I’m currently using an M-Audio Audiophile 192 and some of the Behringer UMC series depending on channel count. I have a Creek OBH-11 powering AKG K701s and Beyerdynamic DT880 Pros and KEF Q100 speakers (odd choice for monitors but I trust them for what I do!).

For platform I’m currently on antiX 17 and Ardour 5.12 but will shortly install version 19 fresh as I await Ardour 6 (can hardly contain myself for the latency compensation stuff!). As I’ve mentioned on other threads bare-bones efficient OS has made the biggest difference for me along with using Liquorix as my low-latency kernel. Not a single x-run to speak of since I switched to this setup and easily achieve your desired sub 10ms latency numbers.

I have an Ideapad S540 winging its way to me with 8th gen core i5, 12GB ram and a 256GB SSD which I fully expect to run my classical on-location stuff very well. I’ve yet to figure out if Linux runs well on it but, honestly, for now it will be there to run a Pyramix native install coupled with the MixPre 6 as a USB interface. Linux will follow in good time. The thing I struggle with for laptops+Linux is always the battery drain but, to be fair, I haven’t scientifically tested this in a long time and I assume at least some progress has been made.

To answer your question “What’s your rig?” in the most helpful way I can, I would echo @alexmitchellmus in saying that my 2013 custom build is still holding up very well. In fact, it feels extremely zippy in both Win10 and all Linux distros I throw at it. At no point for anything do I think my computer feels old.

If I were buying right now, I’d pick up a middle-of-the-road Dell/Lenovo desktop or laptop and a Focusrite Scarlett of some kind (or your RME Babyface Pro if you consider the preamps to be that much better) and have fun making good music! It would be great to have separate drives for system and recording if you can. An even cheaper (and satisfying) way is to build your own using pcpartpicker.com though having had good luck with both Dell and Lenovo, it would be a close call for my own future machine. As much as I drool over the Sweetwater Creation Station stuff, it seems a little overkill…Though if money is no object, you’d also get some of the best support in the business.

The RME Babyface Pro sounds excellent. There is only one quirk with Linux to be aware of (which RME refuses to fix): you can’t direct monitor a mono input on both sides of a stereo output. You can hack around this with a Y splitter cable to send the mono input to two input channels, but of course you lose half your inputs. Maybe someday I’ll try reverse engineering the iPad app to figure out how it toggles that switch in class compliant mode…

They are that much better. That said, the Scarletts do sound good.

These are great replies, thank you!

I’ll see if I can find some post-2013 hardware instead of buying new. I’ll take the suggestion for system/audio drives. The Babyface Pro issue is good to know; I’ll keep it in mind as I work with it.

@bachstudies, you mentioned using a low-latency kernel. In the past, I installed a real-time kernel, but have heard recently that RT isn’t necessary anymore. Is there a rule of thumb about when RT matters and when it doesn’t?

you mentioned using a low-latency kernel. In the past, I installed a real-time kernel, but have heard recently that RT isn’t necessary anymore. Is there a rule of thumb about when RT matters and when it doesn’t?

This would be a good read: https://help.ubuntu.com/community/UbuntuStudio/RealTimeKernel

I also believe that much of the real-time patch is now in the stock kernel so low-latency is now the default in distros like Ubuntu Studio with some tweaks for greatly reduced latency. Liquorix is my personal choice…Apparently even the vanilla kernel these days is plenty good enough but you might see the occasional xrun once in a blue moon. Also this:

To cut a long story short, install a low-latency kernel like Liquorix and rejoice!

If you’re doing soft synths, I am not sure what difference the preamps on your soundcard is going to make…? The opamps on your outputs will be of concern as well as your monitors and acoustic environment but your inputs are pretty much just going to be MIDI signals, no? Anyways, I am using an ATX box I built about 3.5 years ago with Intel i5-6400, 8 GB of DDR3 and 7200 RPM HD I sourced from a computer lying around. Works great for me, no xruns or whatever but if you’re doing a lot of VSTs, maybe you want to go a little heavier on the RAM than I did. Soundcard is Focusrite Scarlett 18i20 with the Octopre for added inputs. Most of my tracking is all microphones and preamps into the soundcard. Again, for you I don’t think the preamps matter. As long as the card you use has a MIDI input (and even if it doesn’t, most MIDI controllers have a USB jack these days). 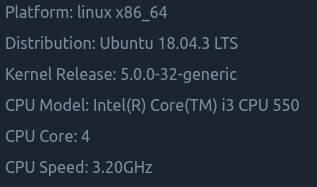 I love Ardour. Most modern DAWs after 2009 or so feel like spaceships to me, and I like how Ardour gets the job done without too many bells and whistles. I mainly record audio, though, so can’t really say how well my rig would work for productions with heavy use of softsynths.

Somehow, I achieve 5.8 ms latency (256 buffer) using this setup, which is pretty amazing to me.

To cut a long story short, install a low-latency kernel like Liquorix and rejoice!

That helps, thanks. I’ll look into Liquorix and the other real-time and low-latency kernels.

If you’re doing soft synths, I am not sure what difference the preamps on your soundcard is going to make…?

I didn’t specify in my original post, but I’ll be doing audio recording, too. I mentioned using the Babyface Pro mainly since the audio interface has the potential to affect latency, which was my main question.

Thanks for your input. It’s good to hear that nowadays it’s possible to get great results with modest hardware requirements.

My setup is an AMD FX 8350, focusrite Scarlett 6i6 16g ram and SSDs running kubuntu 19.10 low latency 5.3 kernel and the kxstudio repositories.

I record the instruments using an old laptop running mint 19.10, kxstudio repos and a behringer um202hd. Both work fine!