Noob here. Is it possible to turn voice into Instrument similar to Imitone? I’ve seen some paid software that have plugins make this possible but not many. I was just wondering if this is a thing in Ardour.

I vaguely remember that there used to be a LUA script to turn audio (e. g. guitar) to midi. I think it was not really targeted at a voice, though. Maybe it’s still worth trying.
And, yes, no real time, just post-processing

Is it possible to turn voice into Instrument similar to Imitone?

Why not use Imitone? Their website says it has a plugin variant (VST/AU).

I’m on Linux and don’t think they have support for it just yet. Can’t find much info if it works well with wine.

Historically, folks have reported that imitone works well under WINE. The app-to-app MIDI driver is not available (meaning you’ll need to set up a MIDI loopback). If you should run into problems, we have a built-in system for error reporting and workarounds, and a 30-day refund policy.

We have been contemplating a native Linux port for a while — indeed, we’ve got the tech for it — but we’re currently focusing on maturing our plugins. Hit us up at support@imitone.com or our forums if you’d like to push for a native Linux port or other features.

@imitone thanks for chiming in, and offering support! That is very appreciated.

@karribu have a look at GitHub - robbert-vdh/yabridge: A modern and transparent way to use Windows VST2 and VST3 plugins on Linux to run windows VSTs on GNU/Linux.

You may also want to play with the script that @peter.zenk mentioned. It is included with Ardour6: Ardour: Polyphonic Audio to Midi Lua Script on Vimeo – processing happens offline (not realtime), and it is also not very well suited for voice. It may or may not work for your use-case.

Thanks all, I will have a look at the information you provided, cheers.

After an offline chat with @imitone (very helpful!) about manual licensing, I can confirm that Imitone works, though it’s not as straightforward as just running the exe via WINE, and it’ll currently just be using the generic UI.

I have it working via the following steps, using yabridge:

While I’m eagerly hopeful for a native linux plugin, this works well enough to definitely be worth the $25.

I can confirm that Imitone works

That’s good news. Thanks for testing this!

MIDI track 1 is where the imitone plugin is added. MIDI track 2 is for recording the resulting MIDI notes

You can do this with a single track: put the plugin before the disk-writer (just like wet-recording)

Right-click in the processor-box > Disk I/O > Either pick “post-fader”, or “custom” and insert the plugin at the top. 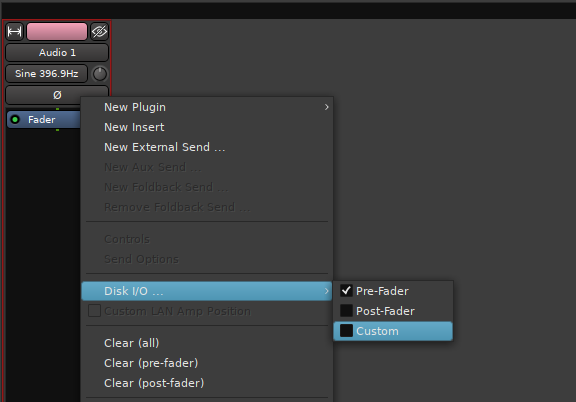