Hello, I was trying to hook up VMPK as a midi input so that I can play some notes through it and also use as notes input, however I can not get it to work.

VMPK shows as Midi input in kmidimon and I can see the events, that it generates.

It also shows in arecordmidi -l:

However, it does not show in Ardour’s Midi routing grid 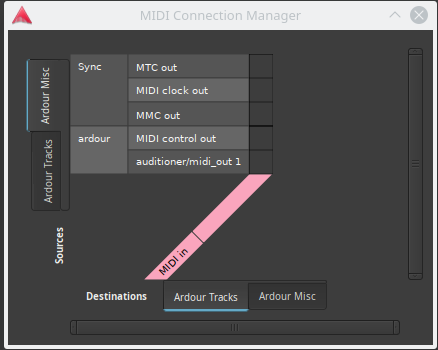 What could I do to fix this problem? Maybe I am missing something?

At the bottom of Window > Audio/MIDI Setup , you need to ensure that “ALSA Sequencer” is selected rather than “ALSA Raw devices” (the latter only covers actual hardware).

Note that Ardour 6.0 comes with its own virtual MIDI keyboard, with both better integration and more features than VMPK.

Thank you so much! Your advice worked perfectly (I needed to to select “ALSA Sequencer”).

As for ardour 6, I’ve tried building 6.0-pre1 from source, but, unfortunately ubuntu 18.04 has outdated build-time dependencies for it and I didn’t have the heart to build the dependencies from source as well, so I guess, I’ll try at a later date.