Here is a wild idea.

So a text file that represents all my MIDI tracks would look like:

And then include a text editor?! Which one? emacs or vi

Ardour stores MIDI files as SMF .mid, so any user who wishes can already directly access it using tools such as GitHub - markc/midicomp: A MIDI Compiler - convert SMF MIDI files to and from plain text with their favorite text-editor.

Anyway, I think you have this the wrong way around. emacs should incorporate a DAW, not the other way around

Also, this sort of thing (using a computer keyboard to create and edit MIDI) is the essence of good tracker interfaces. There is a PR for a tracker interface for Ardour in the “queue”, and we hope that it’s creator will make it mergeable with Ardour at some point.

you just asked for it…

There is a PR for a tracker interface for Ardour in the “queue”, and we hope that it’s creator will make it mergeable with Ardour at some point.

oh, really? tracker interface in ardour(mixbus)? this is so fucking awesome! can’t wait to see it!

Don’t you think that editing MIDI in Ardour (as it is visually) using the keyboard should be comfortable?
Adding a CARET cursor and the correct key shortcuts would make it so.

And then include a text editor?! Which one? emacs or vi

Now isn’t that an evil question?

While embedding one of them is probably overkill, adding a preference that allows you to choose an auxiliary program to edit the text with would be neat and might prevent - or at least postpone - an editor war

Having block editing* and multiple cursors** surely can’t hurt. One would have to ensure that all the lines have the same length by filling them with spaces for them to work.

This is a demo of the tracker interface from a few years ago: 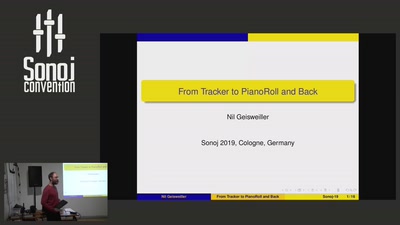 From Tracker to Pianoroll and Back

wow, that is awesome! how i access it in ardour? and do i need special plugin - does the tracker interface only generates midi?

It is not currently a part of Ardour. Nils did the work you see on an older version, and we are hoping they will bring it up to date with the current version, at which point we will merge it.

It is still work in progress:

Mirror of Ardour Source Code. Contribute to ngeiswei/ardour development by creating an account on GitHub.