Using more than on Delta 1010 soundcard

I´m using Ubuntu studio (I think it´s the ubuntu studio 8.04 version) and M Audios Delta 1010 soundcard.
My set up works just great. The only problem is that my studio needs more recordingchannels.

I have an analouge 24 channel consol that I use cause dont really like to mix within the computer.

I would like to run one or two more delta 1010 cards on my computer using Ardour as my DAW.’

I found some hope on M Audios homepage:

IIRC the AVlinux distro maintainer / developer, GMaq, who can also be found on this forum occasionally, runs a system with two 1010 cards in it. I think the main things to watch out for are syncing the cards together and some ALSA configuration is necessary in order to get them to appear in a sensible way to JACK.

Here’s a config/howto for two 1010’s :
http://www.jrigg.co.uk/linuxaudio/ice1712multi.html
and here’s a walkthrough using that info :
http://www.ilovemyjournal.com/?action=view_entry&eid=4773

In addition a HowTO I did here for AV Linux, should have most relevant info for Ubuntu users as well:

automatically? The only way I can get this going is to start Jack then Ardour separately I tried the settings in the initial Ardour start up and the settings in Qjackctl but all that seems to work is the command line…where does Ardour get store its initial startup values for jackd?

@leadghost: there isn’t. Ardour’s own settings are stored in a file in ~/.ardour2 or ~/.config/ardour3 depending on which version you use. But Ardour’s dialog for this is intended mostly as a toy. Most Linux users will enjoy life more by using qjackctl (some linux distributions call this “jack control”).

Check the output of aplay -l and aplay -L.
The first lists the hardware devices, that should make sure both cards are detected. The second lists the PCM devices, I think that should show your multi device. If both cards are not shown in the output of the first command obviously the multi can never work. If the cards are shown but there is no multi device you will have to find an error message somewhere to give more info on why.

Also, A slightly easier way is to use zita-ajbridge to add the second delta. zita-ajbridge now has the -S option that can be used when the two cards are hardware synced.

Thank you Len! I have zita-ajbridge on my machine

But what is the next step? I’m a newby in linux so for me it is not clear what I have to do.
So I have a word clock cable and a spdif cable. for zita I need the word clock, I think.

Ok, when I start ardour, new project, I got this screen. 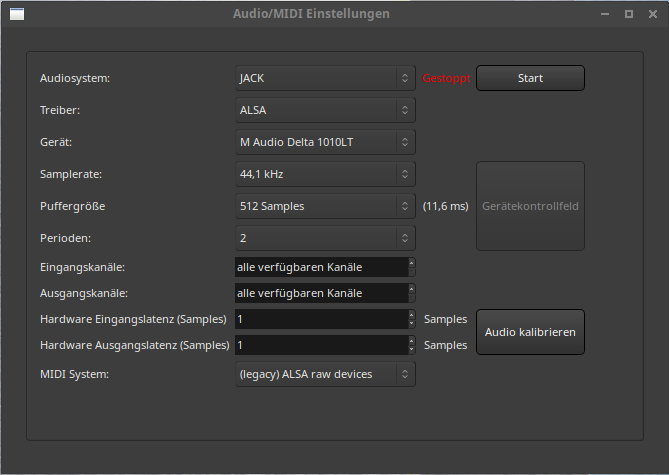 I press start and only have 10 inputs.

So when I start first of all qjackctl and open the options, I have this options: 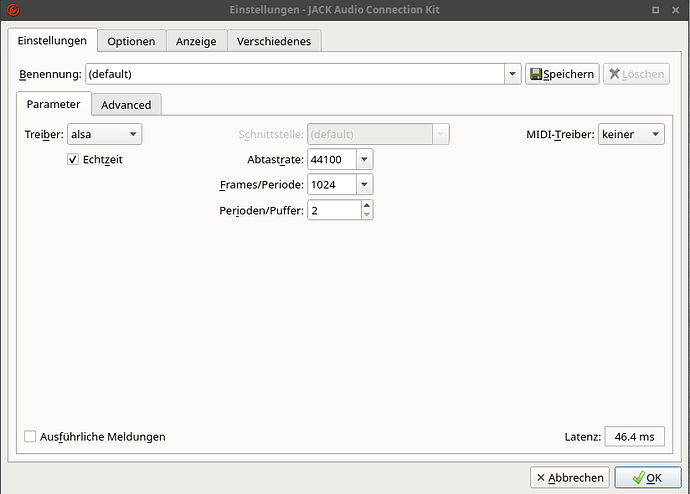 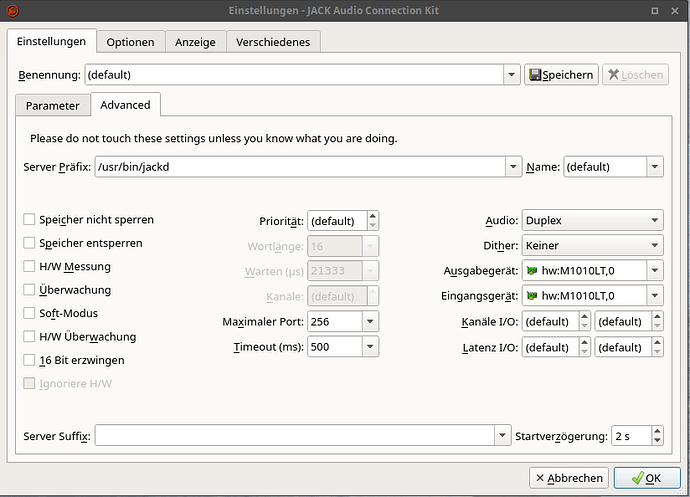 Can you explain me step by step? I am sorry but I came from windows and try to learn linux, but it’s not so easy for me.
Thank you so much
Chris

I have a word clock cable and a spdif cable. for zita I need the word clock

You should be able to use either, but you will need to use the configuration program (envy24control) to change the clock source from internal to word clock or from internal to S/PDIF on the second interface. You may have to install the alsa-utils package to get the envy24control program if it is not installed on your system already.
Connect the appropriate cable between the two devices, make sure to set one device to internal clock, connect the cable to the output of that interface, connect the cable to the input of the device using word clock or S/PDIF clock.
I have never had two of the same type of card installed in a computer, so I do not know how the two different cards will be identified so that you can make sure you are setting the appropriate device to external clock. See below.

Note that I just made a guess for “M101LT0-2”, and assumed that if the cards are usually called M1010LT then there would be something to distinguish the first card from the second. I do not know how the two cards will actually be named. Look in /proc/asound/cards and see what names are there in the [ ] bracket characters.
The -r argument is of course the sample rate, it will need to match what you set for the primary card, and you will have to change it if you change the sample rate of the main card.
The -c argument sets the number of channels to use, I assumed 8, but I think maybe you can use 10 if you want the 8 analog inputs and the S/PDIF also.

Note that you can run the cards without synchronizing the clocks by removing the “-S” argument for the zita programs, but in that case it will cause the audio to be sample rate converted to account for the very slight mismatch in sample rates when using unsynchronized clocking devices in two cards. Assuming you can find the correct place to change the clock configuration there should be a slight theoretical advantage to synchronizing the card clocks. Whether that is audible enough to be worth the effort of connecting and configuring the two cards you will have to decide for yourself.
If you want to try running without synchronizing you still need to check /proc/asound/cards to find the correct names, but then with no configuration changes to the cards you can start jackd using the first card, then load the zita programs:
zita-a2j -d HW:M1010LT-2 -r 44100 -c 8
zita-j2a -d HW:M1010LT-2 -r 44100 -c 8

If that works and you like to use the two card configuration always, you can have qjackcontrol start the zita programs for you automatically. In the Options tab of QJackcontrol check the box for execute script after startup, and put the two commands into that box with a ; character separating the two programs, and a & character after the end. The ; separates two commands so that they can be distinguished from one long command, and the & character means keep running after starting a program, do not wait for it to finish before going to the next task. So in the execute script after startup box you would put something like:
zita-a2j -d HW:M1010LT-2 -r 44100 -c 8; zita-j2a -d HW:M1010LT-2 -r 44100 -c 8 &

Then in the execute script on shutdown you can put this to stop the zita programs:
killall zita-a2j; killall zita-j2a

I do not have two of these cards myself, so some of the information I am having to make my best guess based on how it should work, but if you get stuck you can post back here and someone should be able to help.

I normally also use the -j name switch (like -j D1010-out and -in) so that the device shows up as D1010-* rather than zita. Also, setting -c100 will give 10 outputs and 12 inputs without having to worry about how many are actually there, don’t worry about the error that it could not find 100 channels

I use zita-ajbridge quite a lot (for testing) and have a script that detects USB devices and auto connects then to jack, so having them named by the device name is less confusing.

Thank you very much for your response.
For me the name of the card is not clear.
when I open the card file, the name is M1010LT_1 and when I use the string, the name is wrong

I made a mistake in the naming, try with hw: as the prefix (lower case) instead of HW:
I thought either would work, but I found after experimenting that using HW results in an error, hw will work, no prefix also results in an error.

Just saw this thread. FWIW I’m still using three Delta 1010s set up as described here (and linked in an older reply to the thread):
http://www.jrigg.co.uk/linuxaudio/ice1712multi.html

I’ve used this method since 2006 and it’s still working perfectly on Debian 9.
Note that it won’t work with qjackctl as that doesn’t recognize virtual devices using ALSA pcm_multi.

@bassman_chris: “I have everything tried from the links above but I didn’t get the second delta worked.
when I use this command
jackd -R -d alsa -r 44100 -C multi_capture -P multi_playback
I got this answer:
ALSA lib control.c:1373:(snd_ctl_open_noupdate) Invalid CTL multi_capture
control open “multi_capture” (No such file or directory)”

Check your .asoundrc. If you haven’t specified the multi_capture and multi_playback devices in that file correctly alsa-lib won’t recognise them.

and In Qjack I see the inputs from both cards 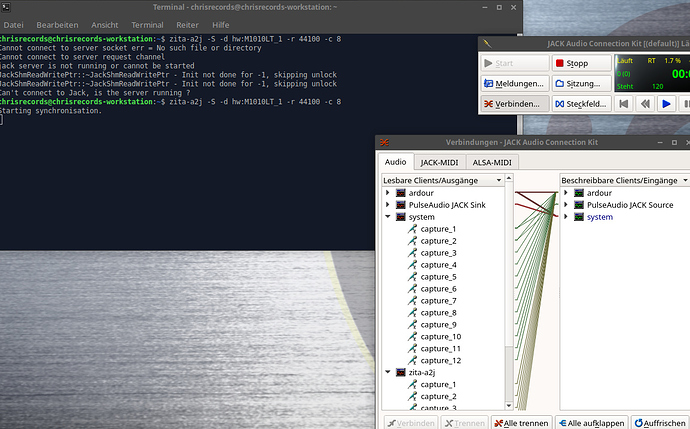 At the moment I have not so much time, but next week I will try to record.

In ardour I can see 12 capture from card 0 and 8 from zita card 2
Now I am happy and I think it will work.
Update next week!
Thank you guys
All the best
Chris