I’m really confused about how to use the Calf vocoder. I add Calf Vocoder as a plugin on an audio track and use “Tracks and Busses” to set my mic and another track as input, but I can’t get the volume levels for “Carrier” and “Modulator” to show anything at all. I’m not really sure how to set the plugin’s carrier and modulator inputs. Any advice would be really appreciated.

I realize I may not have provided all the information needed, please let me know if I can provide any other info that would clarify what I’m trying to do.

Connect your carrier, usually a synth, to the vocoder plugin track and connect your mic to another track.
Open the vocoder, click Pin configuration, click Sidechain and select your mic track.
Drag connectors from the blue sidechain pin to the green sidechain connectors.
Make sure the vocoder send that appears on the mic track is above the fader and set that tracks master fader to zero.

Thanks peder! This helped and I got it working when I record into the vocoder track. Is there any way to get it to vocode in realtime?

jshou: it only works in realtime. There are very few FX and processes in Ardour that are not done in real time.

Do you want to use the vocoder in a live setting, is that what you mean by realtime?

You don’t have to fire up Ardour for that, it’s more lightweight to start the plugin using “jalv” and then connect everything using QJackCtl.
In the image below I presume your mic is connected to the system:capture_1 input 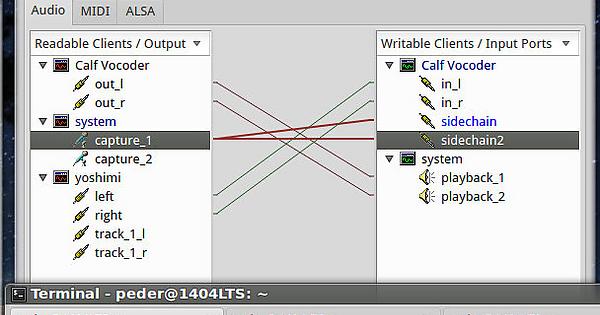 You can list the URIs to your installed plugins using “lv2ls”, which you should have installed as a part of the lilv package

Hm, I must be not doing it right then. The way I’ve hooked everything up, when I play something on the synth and talk into the microphone, I don’t hear anything in the monitors. I’m having to record a vocal track, then a synth track, then “record” the vocoder track as I play the vocals and synth as inputs into the vocoder plugin. I wanted to be able to hear it “live” so I can test what I’m doing before I record it.

Thank you so much for the screencap of your jack setup. I will give this a shot.

I’m not sure if Ardour can be persuaded to do what you want.
If you want to hear the effect while you’re recording I think it’s better to use jalv as I did and then send the vocoder’s outputs to an Ardour track.

I discovered the trick minutes after my previous reply.
The key thing is to enable record on the tracks and to click the “In” buttons to monitor input.

In the example below I used MPlayer to play a spoken word wav file, as I didn’t have a mic at hand 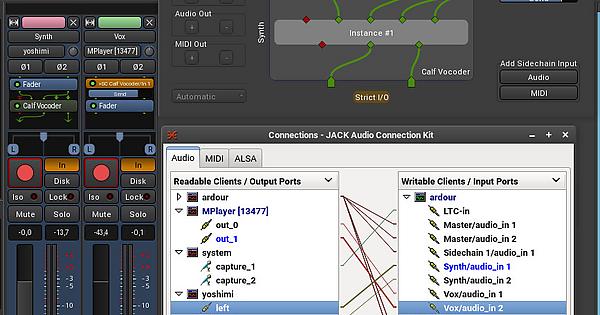 This is great! Thank you so much! I’m finally hearing the vocoder from within Ardour. Weirdly though, now when I record both tracks simultaneously, it only records the voice and my synth track doesn’t do anything! Any ideas what that might be?

I noticed the same thing.
It seems Ardour doesn’t record the effects “in place” on a track, at least not in the default setting. I connected the output from the synth track to another track and recorded that.
I also noticed that you don’t have to record enable the synth and vox tracks, hitting the “In” button is what matters.

I believe you could use buses instead of tracks for the synth and vox channels, since you have to route the output to a separate track anyway, but with all the hassle it almost seems easier in my mind to use jalv and set up the vocoder outside of Ardour.

Ardour does not record “wet” data - it records the current input (“dry”) signal to the track (audio or MIDI). This is pretty standard across most/all DAWs.

Ardour 6.0 will likely feature the ability to move where in the signal path through the track recording happens.

There’s always the option to bounce the track in real time, just add a new track and connect the vocoder track output to its input and record that track instead of the vocoder (or both). I often use this to method record demonstrations of plugins for my podcast.

Thanks so much for all the advice, everybody. I will try outputting to a separate track.

It works! Thank you so much for your help.