I’m currently digitizing some vinyls with house music, and I observed that some records plays back with some irregular and high peaks, and they prevents proper normalization. See an example below. Now, I would like to ask what options are here to gracefully tame just those peaks?

Thank you in advance for any kind of help and advice in this. 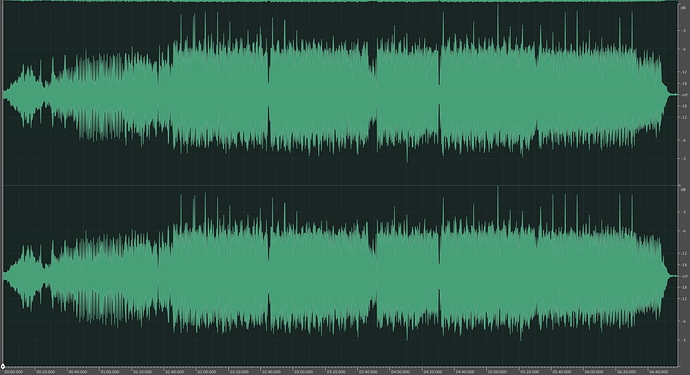 Are those crackles or valid peaks?

If the latter, a limiter is indeed the right approach.

Nope. That would mean that after the limiter attenuates the signal it will keep doing so.

You really just want to shave off the peaks but leave the rest alone. A release time around 10-50ms will likely be appropriate here.

@x42 thank you for your reply.

Maybe those peaks are not crackles and also not valid peaks. I uploaded that sample, and if you are interested and have time for it you can check it:

"Release time defined in dB/second, like in ReaLimit, is sometimes called auto-release, because the release time depends on the amount of gain reduction and is therefore dependent on the material.

You could set the release to inf dB/second meaning instantaneous, so the gain reduction would have no release stage, only the fixed fast-attack and fast-decay stages."

oops. I got confused by the unit. I usually associate dB/sec as meter fall-off.
In any case for a limiter “instant” falloff will likely produce audible artifacts.

Aren’t the peaks caused by two fast successive kicks?
It is definitely not random.

I don’t hear any problems on headphones. Is this a case of mixing with your eyes and not your ears? I’ll have to check to see if there could be a low frequency impulse that I can’t hear on headphones, but a music waveform isn’t supposed to look like a straight line, especially not one with percussion instruments.

That sounds like you mean peak normalization, but that is usually not a good idea. Have you tried using loudness normalization on export? It is just a couple of dB quiet, currently around -17dB LUFS, with peaks at -1 dB FS.
If you want it just a little louder then a limiter at -3dB with 3dB makeup gain would probably be the best option.

@ccaudle, Thank you for your suggestions.
You are right. As I read your lines I realized, somewhere at one point I started to mix with my eyes. I will leave theses peaks as they are