Surge Audio In no inputs

I am trying to experiment with Surge as an effect as discussed in the manual and github :

Using Surge as an audio effect

I've seen a number of issues open on this, or conversations on other issues make… reference to this. Using a synth as an effect is something that I personally find really interesting. I spent a couple hours reading about it on here, and trying different things in different DAWs, so I thought it might be a good idea to compile them along with my personal findings. **Windows "rename as Surge_fx.dll" trick** This works for some DAWs, but only in Windows. Currently Surge will not receive midi when renamed too Surge_fx.dll. I noticed the nightly builds for mac now include a new Surge FX vst3 and AU plugin, which includes all the effects from the effects section. These work great! Unfortunately they don't include the midi controlled modulation capabilities and ability to send audio through the filter block. **Ardour / Harrison mixbus** Surge works fully as an effect or synth in Ardour. You can load it as an instrument and send it audio as a sidechain, or load it inline on an audio track and send it midi from another track. **Logic X and Ableton 10 (Windows and Mac):** Surge works as an audio effect when using these DAWS integrated methods for receiving a sidechain from another track. Midi and audio input are working as expected. (on both Windows and Mac OS in the case of Ableton) These DAWS only allow instruments in instrument slots, and as such Surge can not be used as an "insert" effect, but with creative routing you can do anything you can imagine. These are the best most fully featured ways to use Surge (synth) as an effect currently. **Renoise (all platforms)** Renoise only allows instruments in instrument slots, but has no way to send audio to an instrument (without using a vst wrapper plugin such as Metaplugin). There is also isn't really a way to send midi to an audio effect. Surge can be used in latch mode on Windows with the "rename _fx" trick. There isn't really a proper way for anyone to support a "Synth Effect" in Renoise unless the developers update it (which seems unlikely). **REAPER (all platforms)** In REAPER all tracks can always host streams of multitrack audio and midi and don't have any kind of dedicated "instrument slots" or "sidechain menu". In REAPER if you put an instrument on an audio track the audio will just pass through it, and any audio from its outputs are mixed. Because of this Surge VSTi, VST3i and AUi do not work properly as an effect in REAPER. You can process audio through them but the unaffected audio will still pass in parallel. The windows "rename _fx" trick works in latch mode. Currently Surge can't receive midi in this configuration, so it's only partially functional. (and only on windows) There is a *chance* REAPER developers would add an option for for VSTi, AUi, VST3i to block audio, but it isn't super likely. All the other synths that I know of that work as an audio effect all provide a separate audio effect version, and I doubt they would add an option like this to support one plugin (though if any DAW developer would do something like that it's them) **Cakewalk Bandlab** Its been mentioned here that it does not work correctly. No personal experience. **Bitwig, Studio One, FL Studio, Cubase/Nuendo others......** no experience, maybe someone else can offer experiences if there is anything notable **So in summary:** Surge can be used as intended as a "Synth that can process incoming audio" on any DAW that support instrument slots and sending an external side-chain to that instrument. There is a workaround for other daws in VST on Windows but at this time it isn't fully functional. I've seen another thread mentioning that supporting a dedicated separate Surge_FX synth would be extremely cumbersome and annoying. Has it been decided that it's too annoying/time consuming and there isn't enough interest too support a dedicated "FX" version of Surge as a synth at this time?

I dont seem to be getting any audio ins to connect to . I would be grateful for any assistance 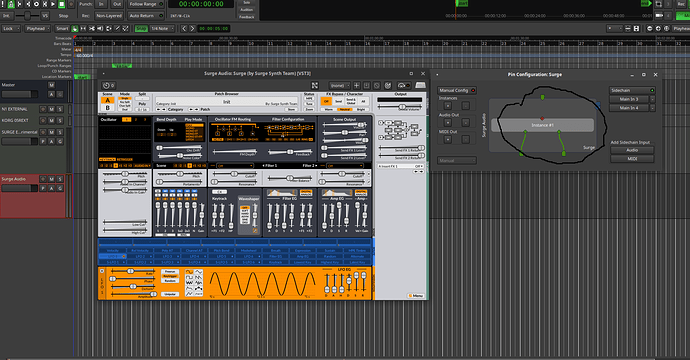 This is currently not possible with the VST3 plugin in Ardour.

You can try the LV2 version of the plugin.

Currently (Ardour 6.9), Ardour only supports VST3 plugins with one pair of Main In/Out and optionally one pair of aux I/O port.

However since surge.vst3 does not have any main inputs, Ardour ignores the optional aux input.

Many thanks Robin , I will give the LV2 a try