It doesn’t matter if I use ALSA or JACK audio system. In both situations all audio outside Ardour wont work. I’ve read that this is a feature, not a bug, but in some situations, I really need to disable it.

You see, sometimes I want to use a drum machine outside Ardour and listen to some samples on the web browser or on rhythmbox player. There are many more situations, where I need to use audio outside of Ardour, and it is really annoying, that I have to turn it off each time.

So my question is: how do I configure Ardour, so it would work together with other audio software, when using ALSA or JACK audio system (need answer for both systems)?

On Linux, both Ardour’s ALSA as well as JACK explicitly ask for exclusive access to the device. If not, it would be possible for any other sound-app to change the device settings at any time which is a no-go in any professional recording or mixing situation.

When using JACK, any other JACK app can use the soundcard via JACK though. Non-jack audio-apps can be bridged to jack (see http://jackaudio.org/faq/) most pro-audio linux distros set up a pulseaudio and alsa to jack bridge. Default Ubuntu, I don’t know, but simply installing the “pulseaudio-module-jack” package may do the trick.

My current way of working is to open the Audio/MIDI Setup window, set it to “Always on top of other windows” and hit the Start/Stop button every time I switch application, which I assume is not the way to go. At least I’m not very satisfied with it because it covers a large part of the screen for just one button. Is there any way to have a switch in the main window? If not, what’s the better approach?

Why do you want to stop at all? What other applications do you use while recording or mixing?

Perhaps use a dedicated soundcard for pro-audio applications?

or if you’re only mixing you could use Ardour6’s pulseaudio backend.

I’ll try the pulseaudio backend. To be sure, is that described on this page? https://ardour.org/jack-n-pulse.html 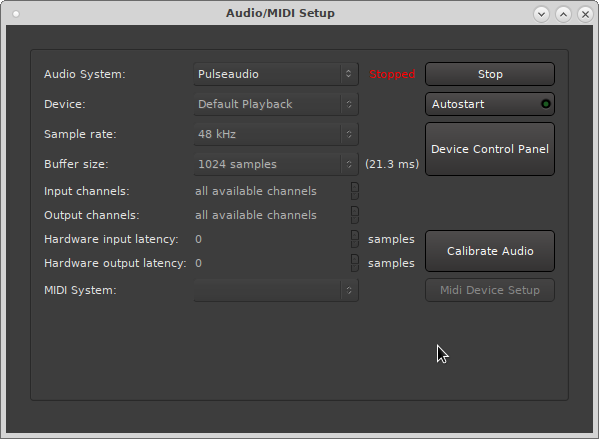 Note that this is playback only. Since pulseaudio cannot guarantee reliable settings, it cannot be used to record. However if you’re only mixing or editing, that may be fine.