I’m wondering which would be the best way to do this. I’m thinking of sending a snare track to a plugin that plays a sound (snare hit from library) when the source passes a certain threshold, maybe not to have it as the only snare sound but to blend it with the original.
Does that plugin exist for ardour? : )

Also is there a way to convert all snare hits to MIDI info? so I can then put that info in an instrument track and have a MIDI snare playing along…

So I’ve just managed to install the lsp plugins and its trigger works beautifully. Thanks again for helping me out

Hello again! I had to let this trigger thin go but now I’m again trying to make it work, although still failing. 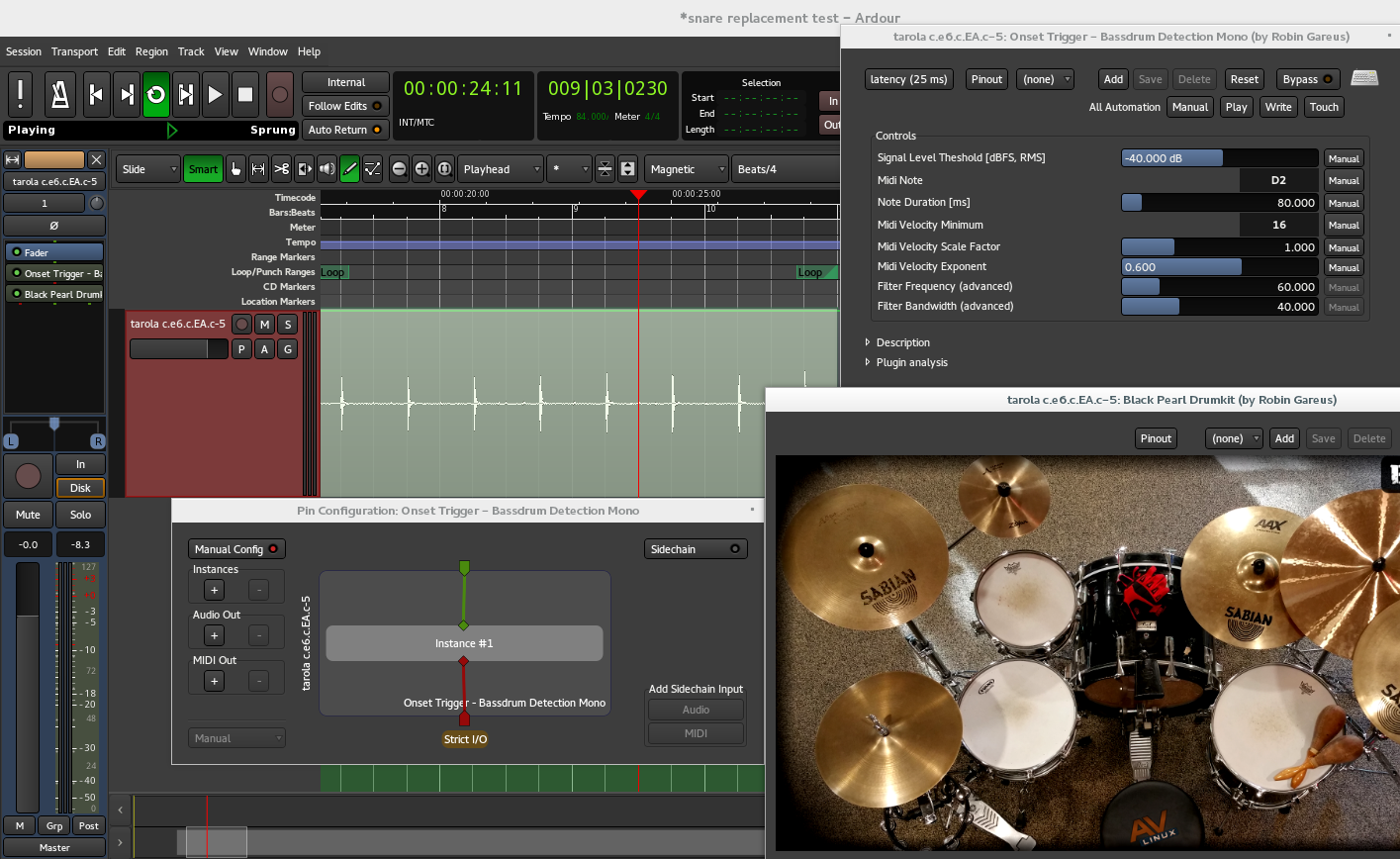 Just and audio track with the snare hits, onset plugin supposedly reading the audio from the track, then going to the instrument playing the D2 note, then going out to master. I can’t hear anything neither see any meter reading some signal. Seablade I read your suggestion of a MIDI monitor, but maybe the Onset Trigger plugin analysis not showing any action is enough proof that nothing is working? I don’t know what else to touch here

Thanks jrigg for your hints on installing the lsp plugins but at the moment I don’t want to dive in console commands as synaptic works very well for me. I haven’t had any problem with Debian since I installed it and I like to think that it has to do with me not messing around with sudo tweakings, which I used to do when I was on Ubuntu and system problems haunted me from time to time. 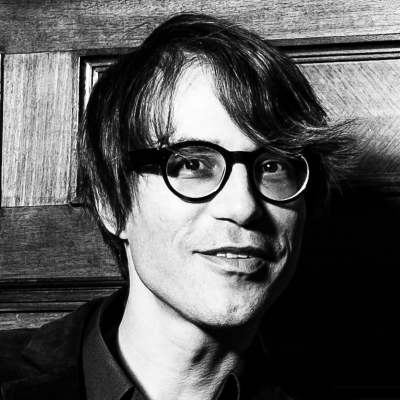 This will do the job. Use the MIDI out of it to trigger a snare sample, might take a bit of work to get the settings correct, but it does work.

Thank you very much for your answer, I’ve been since trying to get it to work but I am definitively missing something. I have the plugin, and I’ve moved it around, messed up with manual pinout, etc, but I am kinda lost. What seems more “logical” to me is to have the plugin in a MIDI track, and set a sidechain from the snare track. But I think it is not reading any input, no matter how low I put the threshold. As I neither find any online instructions for the plugin I’m pushed to bother you again: how do I do this, please xD

Or look at these plugins: http://lsp-plug.in/ I recently used the trigger plugin to enhance a bass drum. Very useful

@xherbie Heh I didn’t even realize there was a trigger plugin in those, thanks!

@bluebones What I did with the student was to put the plugin in the audio channel strip, and then routed the MIDI output of the plugin through the pin connection window into a MIDI Bus that I put the virtual instrument on. For the student I was demonstrating this to, I eventually simplified it to just have the MIDI instrument in the same audio track (Again making sure my routing was correct in the Pin Connection window) which brought benefits of latency compensation etc. which would be what I recommend. If you need to mix the original in with the sampled sound I would recommend creating a new track and sharing the playlist between the two tracks (So that any edits made to one are reflected in both tracks but they can be EQd differently etc.) and only using the trigger/sampler setup on one of the tracks and the other being for the original audio.

Hello again. Well I’ve been trying to make it work, “god is my witness”, but to no avail xD

@xherbie those plugins look great, but I can’t install them. Long story short I’m using Debian 8 and everything I got installed has been either via synaptic or a downloaded .deb package, somehow I cannot sudo/root my way through an install like I used to when I was with Ubuntu. I just can’t. So those plugins will have to wait.

@seablade thank you very much for your time, maybe I just need more experience with the program to accomplish this. I understand the logic of it, connect and set up everything by that logic and yet it doesn’t work. I’ve tried different things, but mainly two options with a goal in mind: just to get sound from the audio>trigger plugin>virtual instrument chain.
I’ve got the MIDI track to have input signal from the output of the audio track (routed through pin connection window), but from there that signal dies in the trigger plugin set up in the same MIDI track. Second option: the one you first explained, have the trigger plugin in the audio track and connect the now MIDI output to the input of the MIDI track/bus (tried both), there once again the signal dies at the beginning of the plugin. I’ve checked my virtual instruments, they work if I play randomly the MIDI keyboard. Also tried your second option: having the plugin and the MIDI instrument in the same track, checking connections (in my case it looks green with audio and red with MIDI) and all, everything looks tight. I may be not getting well the plugin itself, I’ve changed the threshold parameter and the note parameter.

If you have any other hint it’s much appreciated, no rush, I’m getting other stuff done as well : )

Why bother with MIDI? Just use a trigger plugin that takes an audio input as trigger.

The lsp-plugins-trigger-mono is my usual choice for drum replacement. There’s also ladspa-trigger if you want something more minimalist.

That last line will prompt you for your root password.
If you didn’t set a root password now would be a good time to fix that

Most trigger plugins output MIDI in order to trigger a sample.

Did you make sure the plugin was outputting the correct MIDI note to trigger the sample?

I would also recommend using a MIDI monitor plugin so that you can make sure there is MIDI coming out of the plugin if you haven’t already.

@seablade: The trigger plugins I described play a loaded sample when audio input exceeds the threshold. The LSP one has a file chooser menu for loading samples. The ladspa-trigger is more basic and has a hard coded location for sample files (so you copy your chosen sample to that location).

Both were designed specifically for sample replacement or enhancement without having to resort to MIDI.

Well a couple of things, one in my experience that isn’t really how most work as they are designed to trigger a sample playback engine, but two I assume then that they don’t do any attempt at velocity mapping etc?

Three is that once you get your head wrapped around how it works, the MIDI isn’t difficult. It is actually much more difficult to get the audio input of the plugin set correctly for the triggering than the MIDI.

Well a couple of things, one in my experience that isn’t really how most work as they are designed to trigger a sample playback engine, but two I assume then that they don’t do any attempt at velocity mapping etc?

Three is that once you get your head wrapped around how it works, the MIDI isn’t difficult. It is actually much more difficult to get the audio input of the plugin set correctly for the triggering than the MIDI.

I assume then that they don't do any attempt at velocity mapping etc?

The LSP one maps the sample playback amplitude to the amplitude of the input signal. There's a control to adjust the dynamic range. That's often enough for sample enhancement of drum tracks. (I agree you'll probably want to use a MIDI-triggered sample player if you need multi-layered samples.)
jrigg (J Rigg) January 26, 2018, 3:26pm #18

I haven't actually noticed any difference in the difficulty of setting a threshold on an audio-MIDI trigger vs. an audio-triggered sample player. After two or three decades of messing around with hardware triggers and samplers, both types of plugin are pretty easy to use :-)
seablade (Seablade) January 26, 2018, 3:58pm #19

I haven't actually noticed any difference in the difficulty of setting a threshold on an audio-MIDI trigger vs. an audio-triggered sample player. After two or three decades of messing around with hardware triggers and samplers, both types of plugin are pretty easy to use :-)

Yea that wasn’t a comment on Audio/MIDI vs Audio only, that was a comment on the difficulty of MIDI in general, it is more difficult to get the audio input side set up correctly than it is to deal with the MIDI routing honestly.