I got a hardware setup which looks a bit messy in the Patchbay – the input channel count is 10, and the output channel count is 12, but the last 8 channels are to see in pairs, because most of the time, I use them as hardware FX sends. So, e.g. to patch an insert correctly, I have to patch ‘playback_5’ and ‘playback_6’ for the outputs, but the inputs would be ‘capture_3’ and ‘capture_4’. So, to make things a bit more logical, I renamed the aliases in QjackCtl to be more pretty and understandable, and also checked the 'Enable JACK client/port pretty-names (metadata), but to no avail. After stopping and restarting JACK service and Ardour, the default names are still there. Is there a possibility to rename the tracks and reflect those names in Ardours patchbay?

Thanks in advance for your help!
Best,
Bene

Here’s the names in Ardour: 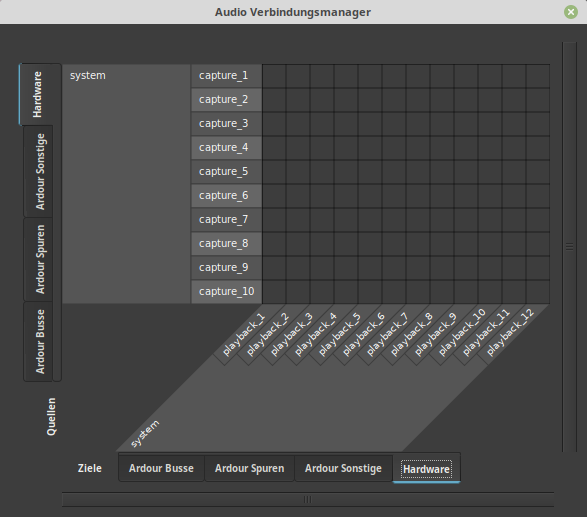 And here’s what I did in JACK: 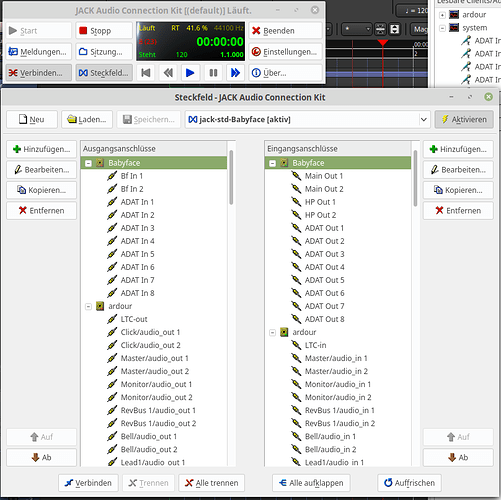 Port aliases were deprecated in JACK several years ago. Port metadata is there to provide a more general mechanism, and Ardour will display portnames using the “pretty-name” metadata, if it exists.

Hi Paul! Thanks for your reply!
Okay, that sounds promising. Do you know how I can edit the metadata? My device runs as a USB 2.0 CC device, if that matters.

I no longer follow JACK development, but the last time I looked, JACK2 (the version used by most Linux distributions) did not have support for metadata.

If it does have it, or you use JACK1, then the jack_property command can be used to set/edit/manage metadata.

I see. I really hoped that there’d be some graphical editing interface for this, since I’m not yet a command line ninja (but more of a creative persona).
Strangely enough, I can just rename the ports in Jack, but the new names do not seem to be stored as metadata, because they aren’t reflected in Ardour.
I just found this documentation, but it seems that it’ll take some time to work me through (and understand) this.

EDIT: The command jack_property cannot be found on my system. So I guess that means that Jack 2 doesn’t use it. Would there be an alternative way? Maybe change the names in the Class Compliant ALSA driver? Or would it be better to use Jack 1? What are the disadvantages of version 1 compared to 2?

Okay. So would it be feasible to just switch to Jack 1? Are there real disadvantages considering performance or stability on my 4-core xeon System, or would Jack 1 be fine for normal work in ardour/guitarix/reaper and others? As soon as I read, the only real difference is multicore support in 2 and metadata support in Jack 1. Worth a try to switch to 1?

would it be feasible to just switch to Jack 1?

What OS version are you using? It is feasible to switch to Jack 1, but depending on which OS version it may be more or less work.
I believe there is also metadata support in the in-development version of jack 2, but you would have to compile the source yourself at this point.

I am running Linux mint 19.1. which is based on Ubuntu 18.04.
I don’t have experience with building stuff from source, but when there is a good how-to, i’d probably get around it.
But anyways, it’s good Info that they seem to implement it ATM. So maybe I also could wait a while until the implementation of metadata is available. The bad names are a bit annoying, but not really a big deal and I would not want to risk the stability of my system just for some prettier names.

I don’t use Ubuntu personally, so double check with someone who does, but I believe you can install the jackd1 package instead of jackd and you will get the JACK1 package that Paul mentioned. For what you are doing you should not notice any difference other than conveniences (jack1 includes the equivalent of the Zita alsa2jack and jack2alsa clients to enable using a second sound interface if needed as well as metadata support).