Hey there, so I know that I can use the MIDI Connection Manager to sync the MIDI clock from Ardour to various MIDI devices, but I’ve found that Ardour only sends that clock when the transport is playing. This leads to some difficulty with recording, since everything is slightly off tempo when it starts recording, and then snaps into tempo. It makes it very difficult to properly record a correctly timed take.

Is there a way to always send the MIDI clock to MIDI devices? Thanks!

It is currently (Ardour 5) not possible.

Meanwhile, as workaround, you could play some lead-in to sync clocks ?!

Unfortunately, a lot of what I try to record uses step sequencers on the devices themselves

. I suppose I could go from Ardour to the devices instead via MIDI - that might work out better in any case.

That said, is this a planned feature / can I submit a feature request for it somewhere?

I am interested about your setup as I think I have a similar workflow.

On which OS are you? Is the MIDI Manager that you mention part of the OS or Ardour?
Why do you think the clock should be send when the transport is not playing?

It should be enough to send MIDI Clock (and start/stop) from the special JACK Midi ports that Ardour exposes.

That’s how they are presented on Catia (a JACK connection tool):

@x42 isn’t that the permanent clock connection marmalade was asking for?

I might be on the wrong path as I had mixed experiences with that, including occasionally not-starting devices and jitter. So maybe that’s not the best way to do it now.

@x42 isn’t that the permanent clock connection marmalade was asking for?

It’s not about the connection. It’s about MIDI data that Ardour generates for the “MIDI Clock out” port. When the transport is stopped there’s no MIDI signal. When not rolling Ardour’s “clock” doesn’t run, so no MIDI clock-ticks are sent.

In theory Ardour could do that though, the tempo is defined.

You mean a Midi clock signal that is output at the current tempo no matter if Ardour is playing or not? That sounds pretty special to me. We are not talking about MTC, are we?

Linux, Arch Linux specifically. The MIDI manager I’m talking about is the one in Ardour. The reason I want the clock to send when the transport is not playing is because when I begin recording, there’s a slight delay between when the transport starts, and the clock is picked up by the devices, resulting in a sudden resync, which affects the timing of the recording, requiring me to go in and edit the clip to try and align it. This probably wouldn’t matter in different workflows, (I don’t exactly have a workflow, I’m still figuring all that out) but as of right now what I end up doing is using the sequencers on the synths that I have, and build out my melodies / drums there, and then record them after. I’ve since adjusted my workflow slightly, using MIDI from an Arturia Keystep to control the hardware synths, using Audio+MIDI tracks, however for some of the stuff I use (like my Korg volca drum) it doesn’t quite work.

If anyone has any suggestions for workflows in Ardour using hardware synths I’d greatly appreciate that as well! I’m mostly just playing it all by ear at the moment.

It’s not an Ardour bug, it’s rather a bug with the hardware keyboard …
The firmware update of July 2019 has the fix for this issue,
One of the bug fixes mentions,
“Start in sync after a stop from master when Midi Slaved”

You’ll unfortunately need to use Windows in order to apply the update, and it’s possible to do the firmware update via Virtualbox. Add the VirtualBoxExtensions to do beyond USB 1.1, and imho that generally makes it better to connect to USB devices. If you don’t trust virtualbox, you’ll have to use Windows natively… Here I’ve done firmware updates via Virtualbox but the system I am using is fast enough to trust using this method…

there’s a slight delay between when the transport starts, and the clock is picked up by the devices

Yeah, at least two clock ticks are required to determine the tempo. So yes, it currently can’t start in sync.

Ardour does send MIDI start/stop/continue and song-position system-messages to the MIDI Clock port, so in general it should be fine to always send a clock in some future version.

it currently can’t start in sync because there’s a bug! I looked at the arturia’s site for the model and there’s a july 2019 firmware update that has this bug mentioned for the fix… I suppose if he did already apply the update then it’s a new bake-cake that I yet to have a bite

Please read carefully. OP is currently using the Aturia device only as stopgap solution, as master to control hardware synths, as workaround (until Ardour can do that, too). The Aturia Keystep is not slaved.

Marmalade, we are exactly in the same boat

I am also recording several synthesizers and drum machines and using a Keystep as master clock. For multitracking this has been a bit fiddly of course because I manually matched tempos. I also tried setting Ardour as master but that would not reliably work (i think that was before the firmware update so i’ll give it another try! Thanks, ahms).

For me it was important to make music without having the computer started. The computer just came in when recording. And recording analogue synthesizers where you would change parameters while playing means you are working with audio, not MIDI. While recording sessions there will be boring parts where i try to find the next chords or just play bad so i want to cut that out later.

My idea is currently to convert Midi clock to notes (not sure if this is possible with e.g. mididings) and record that to a track alongside the audio. Then I would have some visual help to cut the audio afterwards. I’ll try that.

Regarding your problem: have you tried setting the playhead a bar in front of where you want to record to give the sequencer some time to adjust its timing?

there’s going to be an initial release of “VCV Rack for DAWs” – that should be very interesting considering it would allow presets and patch settings to be saved directly into the ardour session. more information can be read about it from its project forum, https://community.vcvrack.com/t/upcoming-vcv-as-plugin-please-dont-forget-linux/6171/4 " The following (plugin, OS) pairs are confirmed for initial release of VCV Rack for DAWs . VST2 Windows VST2 Mac VST2 Linux "

Vcv Rack for Daw is coming out as a separate project around january/february of next year. It’s been largely requested so the developer of vcvrack is making one, but it will be non-free. When you say “analog synthesizer”, could you by chance also be referring to DSP-based analog systems such as vcvrack? I’m always looking for things like this. I know analog synthesizers(hardware) are hard to beat digitally, … I’m wondering if you know of any DSP-based ones such as VCV-Rack…

https://manual.ardour.org/preferences-and-session-properties/preferences-dialog/index.html#preferences-transport
“Preroll: sets the duration of the preroll for playing and recording when using a preroll. Can be a musical duration (in bars) or a duration in seconds.”

There’s something called preroll – I knew it was there because I had a shortkey set to it for playback… so in case somebody may have forgotten to mention it, this may come in as handy for overcoming a sync-timing issue. The pre-roll playback and record keys can be set in the Global/Transport section of the keyboard shortcuts window.

Don’t forget to also check the Transport preference for the preroll ::: 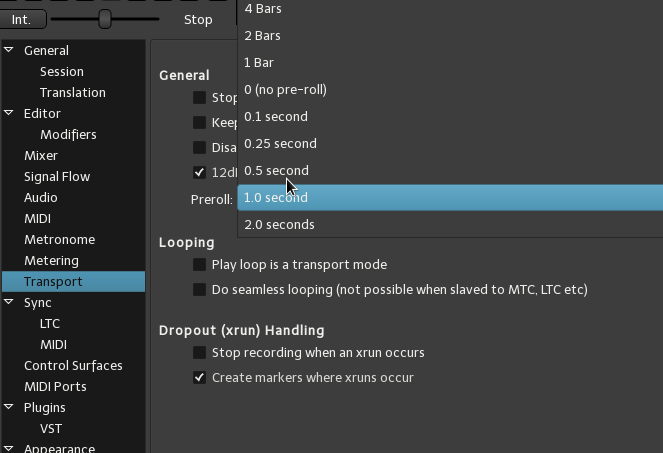