Hi,
I have tried to find an answer in earlier posts but it’s not totally clear to me.
Ardour offers the feature of renaming ports (e.g. in the recorder) so does qjackctl. So far so good. But none of them work. I read that renaming ports is deprecated in jack2.
So, that’s the point where it puzzles me.
Can anyone explain me the situation? I have seen screenshot of Ardour using friendly port names, did they use jack1??
Confused
Rainer

I don’t know that I can explain the situation, but when I use jack2 (on Linux) I have a script that uses the jack_property command to assign a pretty-name to ports on my Scarlett 18i8 using JACK-Metatdata-API so that my hardware audio connections look like: 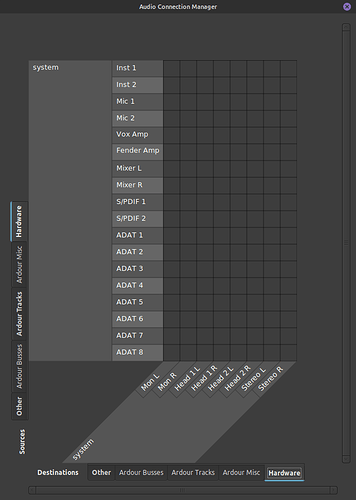 (pretty-name doesn’t seem to work as advertised for the client/interface, system)
I believe the metadata api was added to jack2 around version 1.9.14 or thereabouts.

Lately, I’ve started using Ardour with just ALSA and I hadn’t even realized the pretty-names weren’t there. I’ve not fiddled much with the Rec interface, but I just tried it and the names I assigned did seem to stick after quitting Ardour an starting a new project. Not sure were you’d set the Output names though.

I’d certainly be interested in a better answer as well, but hopefully this is of some use to you.

Ardour offers the feature of renaming ports (e.g. in the recorder)

Ardour does not offer to rename ports. The recorder window allows to sets port meta-data “human readable name” for the given port (specifically http://jackaudio.org/metadata/pretty-name when using JACK. For internal backends Ardour itself stores the meta-data). The actual port-name remains unique and does not change.

PS. while jack1 offered port-meta-data since well over a decade, only very recent versions of jack2 support it.

Not sure were you’d set the Output names though.

You cannot, Ardour uses the defaults provided by the ALSA driver (or Coreaudio, ASIO etc), if any.

Thanks for the answers,
think I have to wait until the most recent version of jack is in the repositories. Now I’m using 1.9.12 (in Linux MX).
Probably there is a repository that offers a more recent version. I’ll look after it.
Thanks
Rainer

Hi, this is from the official Ardour manual, section ‘Recording- The Recorder’:
'Inputs can be named or renamed at will, to ease the recognition of e.g. one microphone in a multi-track recording, like a multi-instrumentalist performance, by clicking the button. Ardour stores this name for the device, so any later session using this input will show this label. ’
Perhaps it would be better and less confusing to mention, that this depends on how jack handles port names.