Over the Christmas holidays ‘Rated Blue’ was able to get together for some jams and a bit of Video. A couch doodle I had been working on with a funky arpeggiated and syncopated E7 chord got a little more developed one night when we rehearsed and later once Connor and I tracked some guitar and drums live one afternoon and felt we had a bit of a toe tapper on our hands but nothing really to write home about… I sent the track to Peter to see if he could do a bass part for it and as Peter usually does he showed up at the Studio one night muttering about how he “didn’t really have a good part” and “wasn’t sure what to play” and “maybe he’d have to work on it for a few more weeks” etc. etc. Then I queued up the track and as usual Pete levitated off of his chair and summoned the ‘thunder magic’ and took our little sketch into the funky stratosphere! We thought it would be fun do up a little Video so we had Adam film it with a few other tunes that we will be putting out over the next few months.

The intro chord and groove really brought to mind the New Orleans sound of ‘The Meters’ who were the backup band for Doctor John and numerous other luminaries of the rich New Orleans music scene and sound and a hitmaking band of their own with ‘Cissy Strut’ and other super funky hits. Since it sounded vaguely New Orleans we named the track ‘Vaguely New Orleans’…

Recorded with a Zoom Livetrak L-20 and mixed/mastered with Ardour 6.9. Video edited with Cinelerra-GG 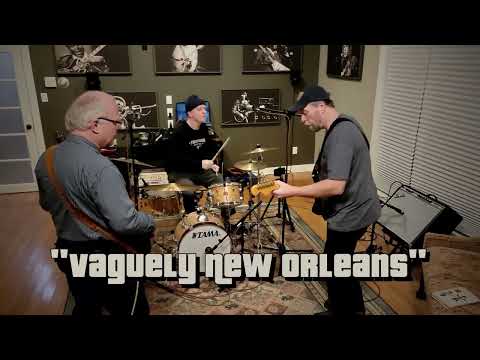 Wonderful tune! By the way, is that “Zen Mind, Beginners Mind” you’re reading there?

Good guess! It’s a copy of the ‘Tao Te Ching’ I got for Christmas, it was laying around close by and we laughed about if anyone would notice and if it would be perceived as pretentious…lol

Since this tune pretty much wrote itself and happened so easily maybe the ‘Tao’ was more relevant than anything else could have been!