I’m beginning to hear from musician friends that gigs are starting to come in and calendars are starting to fill and that is true here as well. I’m hopeful and looking forward to a summer of playing and listening to a lot of great live music and I’m sure you are too.

When I was about 12 my sister Janet and bro-in-law Bill took me to my first Rock Concert… John Kay and Steppenwolf! At the time I was just getting interested in music and although to be honest I didn’t really know anything about Steppenwolf I was just thrilled to be asked to go to such an adult activity. This would have been about 1980 and in reviewing the history and Videos from that time period it really wasn’t a terribly great incarnation of Steppenwolf with none of the original band members except for John Kay but of course from my vantage point the loud energy coming off the stage was in wonderfully sharp contrast to the ‘Cathedral Quartet’ gospel records that populated the cabinet hi-fi endlessly at home. I had never seen Bikers en masse or so many tattoos, long haired freaky people and chain wallets in one room… (Cultural note for the kids… in 1980 mostly bikers, strippers, drug dealers and merchant marines had tattoos)… and you wanted to avoid all of them!! I recall Canadian comedian Mike MacDonald was the opening act and about 43 minutes of his 45 minute set was dedicated to Drug humor which seemed to go over well with the audience but in my case just went over my head… I still really don’t find Drug humor the least bit funny…

Fast forward a few years later and Bill offered me the chance to go through a few boxes of his vinyl collection that had gotten damaged in a basement flood and in hindsight I probably should have just taken the whole box but I picked out a dozen or so albums including a few Steppenwolf ones which had a greatest hits collection. By then I was already (too) well acquainted with ‘Born to Be Wild’ and ‘Magic Carpet Ride’ but discovered a treasure trove of their songs that didn’t get as much airplay but as often happens were better songs in a musical sense. ‘Screaming Night Hog’ was one of these… I have a feeling in those days the record company didn’t have a focus group for song names because as a song name it’s friggin’ ridiculous but musically I loved it. As soon as I heard that reversed kick and snare locking in with the simultaneous guitar and harmonica riff on the intro I was hooked, I didn’t even know what was happening musically at the time I just knew it was unique… I was then properly introduced to Steppenwolf with their peak lineup, the taste, tone and great musicianship of drummer Jerry Edmonton and bassist George Biondo were really a huge part of making these songs great and of course Goldie McJohn was my first introduction to the incredible sound of a Hammond B3.

Pete and Connor never back down from a rhythm section challenge so this past year after we had been apart due to Covid I brought up this song knowing full well we may never play it at gigs… I really wanted to enjoy learning and playing it together just 'cuz… I wasn’t at all surprised when they rose to the challenge and nailed it… I borrowed Connor’s Fender Jaguar, dug out my beloved Octave Fuzz pedal and gargled some razors to get that John Kay rasp and we let 'er dangle! We added it to a collection of songs we recorded and had Adam shoot Video for and this Video is the last of that session… So if you haven’t been enjoying the Rated Blue stuff we won’t have any new material until the summer! 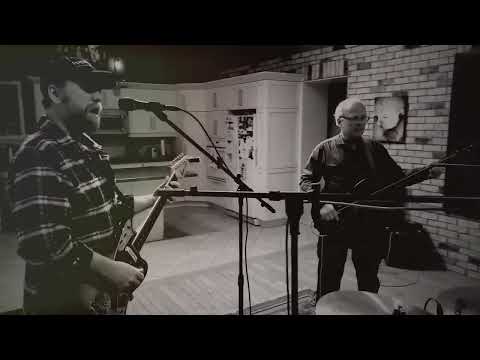 Recorded with a Zoom Livetrak L-20, mixed in Ardour 6.9 and Video edited in Cinelerra-GG.

Really enjoyed that - those screaming guitar ‘stabs’ (not sure what to call em) while you’re singing really make it. Bass is great too, totally nailed it & it sounds like a tough one. Will totally have this tune in my head while screaming over the wild moors through the night. Might even be on a bike.

Rock on !
That is a mean guitar tone

Nice work guys.
Wish you great time at upcoming live gigs ! (I’m so looking forward to that as well)

Great cover! Raw power and energy, snare hits are pretty unusual.
Had to go back and listen to Steppenwolf’s version, not too bad either