I don’t agree with the last part of your post, linuxdsp. I think that having an updated, official, offering of Ardour through the USC would be a good value. It would simplify the updating process for many users, and it would give people another opportunity to donate money to Ardour.

Cameron: of course - if ardour is there in the software center, and the developers decided to make it chargeable, then it would provide the option for users (which could also be a good thing for ardour funding). I just don’t see how the software center works as a concept for paid software. And for accessing a repository of free software, there was already synaptic / apt which always worked just fine for me.

I think for that to happen the developers of Ardour would have to be in charge of maintaining the Ardour package in ubuntu repos (which in a way would be kind of nice since I don’t know what the hell the ubuntu devs do with software but they make a mess of it), Paul + devs would have to come to a big agreement with Canonical for that to happen, and as far as I’m concerned, Canonical will probably want a chunk out of the pie, yes it would probably help Ardour’s financial state (a little bit), but to be sincere, something gives me the idea that Paul and others don’t want anything to do with ubuntu or Canonical, but I will leave that for Paul to say for himself, I personally would not like to work with them.

EDIT: I just wanted to add that it’s not a bad idea, really, but I just think Canonical is becoming a money making enterprise (if it isn’t already) and the percentage they would give to Ardour would probably be very small…

Out of curiosity, what is wrong with Canonical making money? How is that any different from Ardour?

You could leave the ubuntu build of Ardour in the regualar package repository (it’s a “community-maintained” package which means it is likely a 1:1 copy out of Debian) and offer a for-money package “Ardour-which-actually-works” as well!

The Ubuntu app store (software center) makes no sense - for free applications, synaptic / apt works better (e.g. it works) and for paid applications, if they are GPL, you can freely (re)distribute them anyway under the terms of the license (making charging for them a little difficult, although it is allowed). For non GPL, or for apps you wouldn’t be allowed to re-distribute - and which it would then make sense to charge for - (or for binary only apps), you can’t try before you buy meaning, you would have to set a price-point so low as to be irrelevant (or no-one will buy it anyway)
The reason App stores work on other platforms is exactly because they are more locked down (which is regrettable - unless people are prepared to accept a future in which only Apple Google or Microsoft should ever be able to decide what applications you can run on a computer)

Anyhow an interesting book i saw on Amazon. 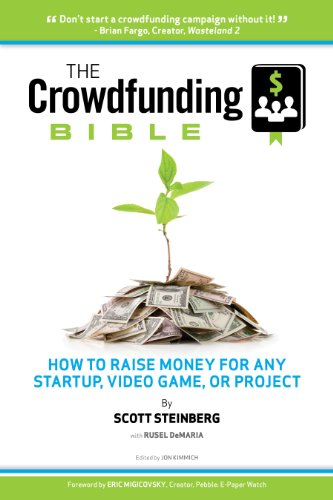 The Crowdfunding Bible: How to Raise Money for Any Startup, Video Game or Project

BRING ANY IDEA TO LIFE OVERNIGHT! Dream of launching a new product, project or startup? Wish granted! Thanks to crowdfunding, today’s hottest form of high-tech investment, suddenly anyone can bring vi ...