I have an audio track through which I’m playing guitar. I have a distortion plugin (GxSunFace) added to the strip and an automation lane set to “play” for this strip. I can toggle the distortion with this automation lane, no problem…

…until I close and reopen the session. When I do this, the distortion is stuck ON (audibly) while the automation lane + playhead position indicates OFF. Further, the green dot indicating enable/bypass is OFF. Even further, I can’t manually toggle the bypass on/off with the green light nor the “power” GUI switch inside the plugin interface. Pressing play to “force” the toggle one way or the other also does nothing. It just stays enabled (audibly) yet disabled (so the interface says).

The only way to turn off the distortion off and have my ears and the interface agree is to set the automation lane to manual, click the distortion bypass on and then back off. Only at that point does the distortion sound go away.

Is this a bug in Ardour, the plugin, or pilot error?

I’ve touched base with @brummer on IRC to handle this issue. It seems to be a guitarix bug (its internal initial bypass state is inconsistent). There may be more to it though.

Yea, thanks @x42 for the pointer.
The issue should be solved now with a update of the GxPlugins from git.

Ok thanks to both of you. I’ll reclone/compile and let you know.

Curious, what was the issue?

No, same issue with the distortion being stuck. I open the file with the playhead at 0 and the sunface set to 0 yet it is still enabled (audibly) while disabled (according to both the plugin and ardour interfaces). See my original post for the full description.

I do see from the most recent github commit of GxPlugins.lv2 that many of the "integer"s were changed to "toggled"s, and that does reflect in the automation lane GUI in Ardour. 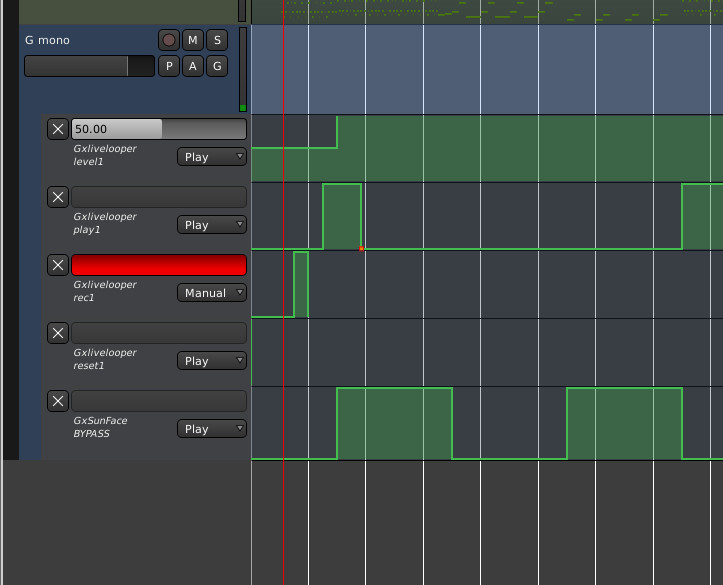 @x42 Why do some automation lanes show red? When the playhead hits this Gxlivelooper rec, I get a loud screeching noise, too. Probably related, I guess.

Why do some automation lanes show red?

Enabled (checked) buttons are red, also in the generic plugin UI. The red dot in the automation lane is a selected automation point.

I was referring to the red horizontal bar just above the text “gxlivelooper, rec1”. Why is that red?

I was referring to the red horizontal bar just above the text “gxlivelooper, rec1”. Why is that red?

Ok update: I deleted all the plugins and started over from scratch with “toggled” for sunface and livelooper. Both work correctly now. No stuckness, no screeching and binary on/off working as expected. Something about the lanes having existing data after changing from “interger” to “toggled” must have been causing problems.

I’m encountering a weird timing issue with the looper but I’ll start another thread for that.

Edit: This probably means that anyone using automation with GxPlugins.lv2 is going to find their sessions broken with the changeover.