The other are slightly offbeat

in others words, pitching the tracks individuality

I am not meaning time stretch, pitch shift, or other effects

Ardour has no current “speed” transformation that can be applied to tracks. It cannot be done as a realtime plugin, either.

Ok, thanks for the reply

As Paul says, you can’t do this for a whole track, but you can effectively adjust the playback speed of individual regions using the time stretch tool, and choosing ‘Resample without preserving pitch’.

I carry on in this topic, since it’s already here, because I have the opposite problem: is there a way to change the pitch of a MIDI track? I have a track where I put the calf multisynth with a detuned organ plugin.
But I shoudl raise the pitch a little. I check with the right click on the track but it doesn’t say anything about it.
Is there a way to do it?
Thank you

http://manual.ardour.org/editing-and-arranging/editing-midi/ also has a section “Transposing MIDI”
or you could use a plugin, e.g the “MIDI chromatic transpose” LV2 midifilter (in utils) to change it on the fly.

Thanks x42. Damn: I just discovered about the link between regions. I just deleted everything because I made a region with a certain midi track, then I copied it up in another place of the track and modified. When I went back I didn’t understand why the first region was modified as well. Fortunately it’s not the whole song, so I’ll make it again tomorrow.
Though I think the link should be disabled by default. It could be activated by the user depending on his needs. But that’s my own preference.
And about the pitch, I found a plugin but I saw it can modified with the arrow key, so it’s better this way.

You can disable it by default. It is in Session > Properties.

Ok back after having tried. It’s not the pitch Paul meant what I need. It’s tuning the notes to a certain frequency.
I tried with the arrow keys but it only moves the notes on the stave or staff or whatever it is. I’m using a detuned organ and I need to put the notes “in tune” with the rest of the instruments in the track.
I chose detuned organ for it sounds, not for the way is detuned, obviously.
So I think the only way is using a plugin.

@telover: It sounds like what you have is a MIDI track driving an organ plugin, and the plugin is detuned slightly. It would be obvious to those of us familiar with MIDI, but maybe not obvious to you, that by editing the MIDI you can only make chromatic changes to the notes. You would need to edit the tuning of the organ plugin which is actually producing the audio to change the pitch just slightly.
One possible exception to that would be if the organ plugin accepts pitch-bend messages, and you could generate a fixed pitch bend message that was active for the entire song. But that is really kludgy, the best way would be to actually adjust the plugin you are using.

Yes ccaudle, I’m using the calf fluidsynth with detuned organ plugin. I used a guitarix tune plugin to raise the tuning of the organ, I don’t know if and how it is possible to change the tune of the organ plugin.

Hi @paul and @x42,
is there a plan to implement OP feature?

…every DAW can do this… in acid pro (ex sony, now magix) it is simple as pressing +/- and selected region would be pitched up/down by semitone. It should work the same way varispeed does currently - in offline manner.

some examples:
Bitwig:
Ability to choose method of pitching: 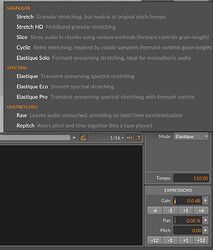 my guess is: this is not hard to implement per region, since you already have realtime varispeed…
now, it would be mandatory that every region slice behaves independent - by that i mean that every slice of region can be pitched up/down independently

some reasons:
no stretching algorithm should mess with transients…
layering several drum hits with different pitch (without stretching) and using eq to get ‘texture’

People don’t normally do this.

you’d be surprised how many people do this.

@dspasic what you describe is pitch-shifting. This is possible: https://manual.ardour.org/editing/editing-regions-and-selections/stretching/

the OP however described individual playback speed per track all those years ago.

Thanks for quick response
i apologize! i overlooked…

addition: can we have a keyboard shortcut where we can pitch shift time region for semitone amount, or ability to define semitones/cents in the menu? 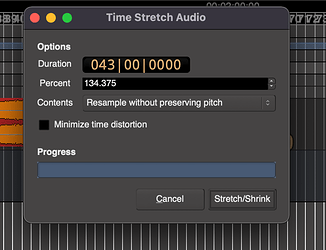 practical example: i have arrangement in C major, but i have imported some samples tuned in-between c and c# (slightly detuned). I’d like to be able to quickly adjust that audio region(s) to match the tuning of other instruments (like 15-20 cents off tune adjust)

pitch-shift as you propsed, introduces artifacts.

region would be pitched up by semitone

pitch-shift as you propsed, introduces artifacts.

Do you want pitch shift or not?
Ardour uses Rubberband for time-stretching and pitch-shifting so the artifacts should be minimal. At least for 15-20 cents shifts.

The stretch and pitch operations are independent, so you can have one without the other.

Rubberband for time-stretching and pitch-shifting so the artifacts should be minimal.

Rubberband is a strange and unpredictable beast.

I recommend using Robin’s x42 autotune plugin. You can disable autotune to control the pitch manually. I’ve found this to be the most reliable (least artifacty) pitch shifter/tuner that is free software and GNU/Linux native.

Another option is to shift the pitch before you bring it in to Ardour. A good tool for this is Signet. I made a video about Signet last year: 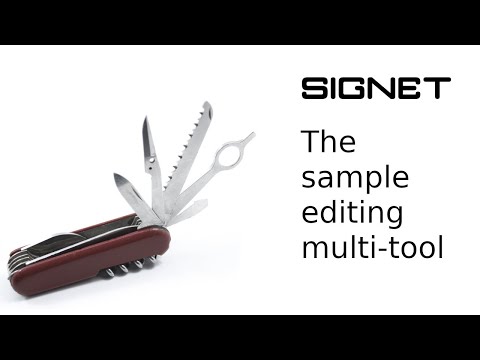 This topic was automatically closed 90 days after the last reply. New replies are no longer allowed.