Pianoteq is perhaps the best piano VST ever made.
An amazing physically modelled piano in under 20MB
with parameters for every possible component of the piano sound.

Probably the most advanced and realistic piano VST ever made.
It uses no samples at all. Every is done in real-time via mathematical algorithms
and their piano model.

You can find more info at www.pianoteq.com

Anyway. I was reading the latest press releases for May 2009 and found this:

Summary of changes in the v3.0.3 update:

sounds good to me on the demos. I find that digital pianos always sound a bit out of tune, maybe because there is no sympathetic vibration modelling. I listened to the Chopin ballade No.1.

Somehow the trills and quick stacatto bits sounded funny, the legato is fantastic.

I was a bit behind the push for the linux version

I tested a beta version before its final release and had a close communication with the main dev. I had alrady a user licence and used pianoteq via wine and wineasio. Worked great but I dislike wine in general, it’s a layer that I really find annoying to use on a linux system. Damn, we use linux, not windows. So I asked for a linux version and gave a lot of feedback. The dev told me that the early prototypes of pianoteq were designed on linux boxes (but the market is somewhere else

and the use of JUCE made the linux port easy.

Pianoteq is not a piano, it’s an “infinite” number of instruments

And they keep improving it at Modartt. If you asked me, they deserve the success and income they derive from it.

Now the question is which plugin format to adopt for linux. There’s a discussion thread on their forum (pianoteq on linux). I believe Modartt would liek to turn it into a linux VST (i.e. neither dssi nor lv2 due to what they think are plugin architecture design complications). I don’t know whether ardour3 will support linux VST. My opinion on the matter is that supporting win32 VSTs is a bit of a burden for ardour. I understand that many ppl using ardour would also like to use their win32 VST collection. But really, the hackery and wizardery involved in wine will always plague ardour’s support. I don’t see any bright future if we keep on relying on wine.

It’s a bit of a Catch-22: I think if Ardour supported Linux VSTs we might see a few developers start making LVST versions of their plugs; on the other hand, LVST support in Ardour won’t get a big push until there are more LVSTs. So someone will have to step forward out of good will towards the Ardour community and implement it. Maybe this plug will be some developer’s motivation to get LVST support in Ardour? I wish I was qualified to give it a go…

This came up on the SOS forums some time ago as well, so thank you, both for the push but also for making sure they didn’t use an OSS backend, and instead utilized something useful(Jack;). I can’t comment on LinuxVST support much, but I can say Win32VST is still where most of the plugins are, so I doubt that will go away completely anytime soon. That being said it has been a bit of a chicken and egg type of problem, so maybe this might address part of that? Its a start anyways, but in the meantime the LV2 devs might be interested in hearing the shortcomings of LV2 from the devs of pianoteq.

I’m not a fan of what I’ve seen in LVST so far, a lot of reheated old Windows VST’s… the only promising thing is the Jucetice guy and now this. What is the issue with LV2 and a lack of support from the Linux Audio Community? It’s native, it’s stable it’s light years ahead of LADSPA in the GUI (a long way to go though).

I also like linuxDSP’s approach, make it a JACK client that will work with anything JACK does, none of this crap with installing Headers and SDKs.

We already have LV2, LADSPA, linuxDSP, FST and DSSI, If people aren’t satisfied with those thousands of plugin choices, they ain’t gonna be satisfied with LVST either.

I hear what you are saying Thorgal but Wine is going to be a necessary evil for quite some time. In fact I think it may be trending the other way, I find a lot of Windows Audio and Video stuff that didn’t work with Wine previously seems to work now.

I’ve been testing the release and have written a review that will be published online soon. As thorgal said, it’s a great program, and it is indeed much more than simply a “good piano”. A few tweaks to one of the presets and voila, I had a piano sound closer to what I’ve looked for than anything I’ve found so far, including some sampled sets. Very impressive. The GUI is easy to work with, there are some excellent user-defined presets available, and the free historical instruments sound fantastic.

No, Pianoteq is not free or open-source software. However, I read perhaps two dozen reviews from win/Mac users and found no complaints about the price. In those worlds Pianoteq is considered a bargain.

Did I mention that it’s stable as can be and worked right out of the box ? Again, very impressive.

I am not blaming wine. Wine is an ambitious project and its achievements are impressive. But I don’t think this is a safe path for ardour in the long run. It would be extremely useful that some robust plugin standard came forward on the linux scene and were adopted by developers, regardless of the OS type. Unfortunately, the de facto industry standards did not come up as the result of a community consultation, thus the problem linux is facing right now: either come up with something better or adapt to these de facto standards. And something tells me that the linux audio world is not enjoying as much company / professional support as say the linux kernel.

Coming back to pianoteq, I initially mentioned to the pianoteq dev that a standalone version would be useful (with a jack and ALSA backends) but that an e.g. LV2 plugin version of pianoteq would be equally useful. I faced a bit of resistance from him at the mention of LV2. However, he came up with a few bug fixes to JUCE during this process and I don’t see why he would not try to improve the LV2 specs if necessary. This said, he also told me that the linux port was to improve the company’s karma … so I don’t have high hopes that this will inspire other audio software companies. They exist in the 1st palce to make money, and let’s face it: how many of us linux musicians / producers when compared to the commercial close source world ? So the immediate problem we face (and that’s no news) is “business as usual”, capitalism in its usual form. However, I tend to think that if we, as an anonymous community of FOSS users / devs, are to rely on ourselves and use / develop our own tools, we in the end get smarter and wiser, and to my mind, that’s what counts. If business as usual wants to participate and contribute, the door is opened.

Maybe the Ardour devs should focus a bit more on the plugins? Paul admits it’s an disadvantage of GNU/Linux, the fact of lacking fancy plugins. But I don’t know what he and other devs are thinking about LV2 and if they help improving that format.

And what about this? Couldn’t this be an solution for making cross platform plugins?

DSP programming is a world unto itself there. That is the problem. It is a different beast than most of Jack programming, and needs different skills in order to do well. There are some talented DSP programmers out there already mind you that have given us some of the better LADSPA plugins. But the relatively small group of them working in open source software won’t supply the huge variety of plugins you get in the closed source proprietary world yet.

Hmm look forward to reading that review, I have been considering picking it up myself and seeing how it compares to the onboard sound of my stage piano, or the sampled sets I have in Kontakt.

@ Seablade, thanks for reply. Maybe it would be useful to promote an cross platform format, so people can make VSTs for there nice Windows OS, but it will be also easy to make a Linux plugin. For example, there are tons of great free guitar VSTs for Windows…

"The principle we follow is “design once, generate many”. We are aiming on
building any kind of plugins or audio backends our users want to build using
the CLAM framework.

One of those targets is building VST plugins for Windows (crosscompiled from
linux or natively from windows). The main advantage for linux users is that
they can visually build their plugins or JACK applications in linux with
CLAM, and then, if they want their plugin to be available for Windows users,
just click a button and you’ll have a VST plugin as well.

LV2 is also on our roadmap, and I guess that having already support for Ladspa
it won’t be that difficult. But right now our interests where VST just
because a project partners asked us for some vst’s and, well, it was funny
doing that from linux. We had vst code working for a couple of years but
without GUI, and in order to make this code valuable we had to unlock the GUI
front. That’s what we did.

The good news, if you are interested in AudioUnits, is that one of our
coworkers, Ferran Orriols, already has an assigned time slot to implement
AudioUnits in CLAM, after his eastern exams.

Of course, any help on supporting whatever plugin/backend platform would be
very appreciated as we have a limited number of hands. " 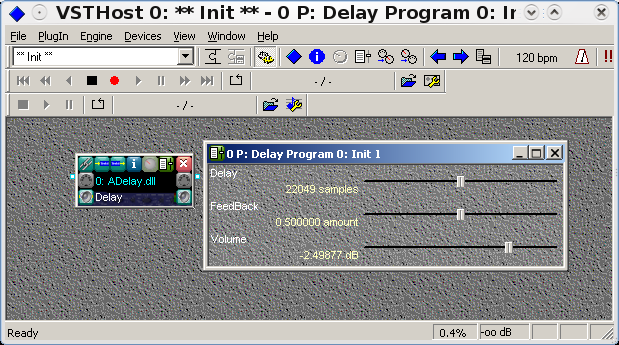 I recently did an spike on what we need to make VST plugins first class CLAM citizens. CLAM allows to visually build JACK and PortAudio ...

I think it’s great that’s available on Linux too, to have choice and it will maybe a good thing if many people buy it…

Besides that, for that kind of money I would prefer buying such a thing:

Pianoteq really is much better than the piano sample of Linuxsampler. It sounds much richer. You have the full 127 velocity levels whereas the maestro concert grand has only 5, thus restricting the interpretation of the pianist. The overtones are a lot better. Also the volume of a note when hit doesn’t fade away so (for my preference) unnaturally fast as it does with the maestro. And on my poor system it runs a lot smoother, because I do not have to close every other application to free some ram. You should note however that Pianoteq is cpu intensive.