I’m trying to open some sessions mixed with Mixbus 3 in Ardour 5.3.0. Everything seems to be ok but the Master Bus is not reachable at all and has no signal input. I can’t route any signal to the master bus. If I try to route the signals in the master bus with the audio mapping the master bus is grayed out. 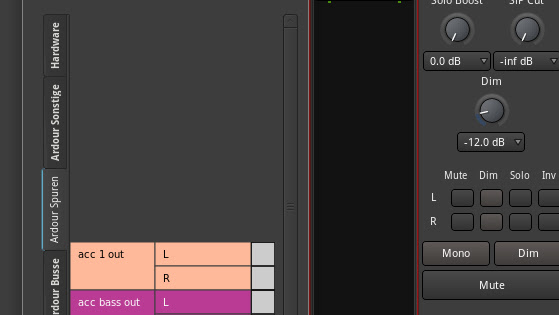 xherbie: this is not a suprise. What are you expecting?

I think if you click on the master bus’s “input” button, and add 2 inputs, then it will become a normal strip accessible with Ardour routing. ( you’ll have to manually patch every track to the master bus, though, since that is normally done inside the Mixbus mixer )

Unfortunately the tip from BenLoftis is not working. In earlier version it was possible to switch between Mixbux and Ardour. Nevermind I thought I could take an older project to play with the new features of ardour 5.3. Regards

@xherbie: what doesn’t work about it?

I added 2 inputs and assigned the outputs to the master channel. But nothing arrives in the master bus the meters remain quied in the master bus. The only sound I get is from the click metronome. Soloing of a channel results in no sound.

But it is not really important for me.