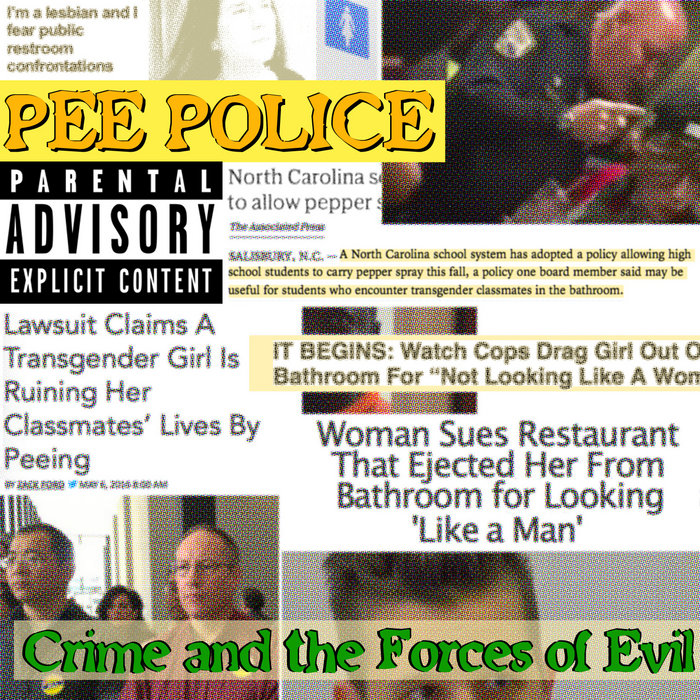 Pee Police, by Crime and the Forces of Evil

Much grindier/harder than anything else I’ve released; I had a lot of fun with vocal mutations. People have even asked who I got to do the vocals - that would be me and a lot of stacked effects plug-ins.

(I sound way more butch here than I do IRL, that was fun.)

Also, there’s a bullhorn. Never forget the bullhorn. I got a fever, and the only prescription, is more BULLHORN. XD

(If you’re confused and wondering what it’s about - basically, the American fundamentalists have ginned up a new moral panic about transgendered people being allowed to use washrooms, and now you have bathroom vigilantes assaulting and harassing any woman that doesn’t look ‘feminine enough’ for them, particularly women with short hair, and lesbians, but also just anybody they decide looks funny. And so I wrote a song about what I’m calling the Pee Police.)

Great song!
The acoustic guitar really fills out the sound well, but in a pleasant way. Some of the early vocals remind me of Jello Biafra actually, in delivery style.
what kind of plugin stack did you use on the vocals? it’s very natural sounding!

It varies by section, but! There are a few things going on here. First, I have a vocal tract that is pretty much made of scar tissue and I’ve learned to use that - sparingly, my throat isn’t super-fond of it, I’m on acid-reflux medication permanently for unfortunate but necessary reasons - to get that kind of angry-man crackle-snarl? I’d played with that before, but I really turned that shit up to 12 for this, and figured out some new things. So using throat damage to my advantage - instead of trying to work around it - is the starting point.

Second is purely analogue: the SM58s I have - pretty old ones, bought used - approached the right way will literally generate a bunch of low harmonics out of nowhere, low down vocal tones that I’m missing in real life. That was critical, 'cause the lowest note in that thing is the A below middle C, but the low harmonics make it sound way lower. So yeah, I get right up on that grill at the right angle - it’s almost aimed at my cheek more than my mouth really - and they start appearing, it’s neat.

You should be able to duplicate it (if you only have, I dunno, good mics or something XD) with one and two octaves-dropped duplicates of the vocal track, applied sparingly, as effects under the main vocal track.* I’ve done that kind of thing live with a POG, it’s not exactly the same but it’s close, and in studio you could definitely do better.

(Laurie Anderson used to use a pitch shifter on stage back in the day, she did some amazing things with them. I have seen exactly once a recorded performance of “The Day the Devil” she did on Saturday Night Live back in the 1980s maybe? I don’t even know, it was pretty old. I’d love a good quality copy of that performance, I’ve looked a few times and never been able to find it. I think I found the episode once, but the music performances were missing.

Anyway, sorry, back on track. Then - I love the Calf plugins. I know they’re flaky, they’ve caused me trouble too, but I love what I can make them do when they behave. I’m using both their saturater and their compressor here, as well as the TAP equaliser - the one with bandwidth adjustment, 'cause that was important. I also threw on a touch - just a touch - of Steve Harris’s fast overdrive, just to raggidy things up more up front. Those also do interesting (and exploitable) things with harmonics.

Frankly I was expecting it to sound less natural than it does, and was okay with that? And soloed, it sounds less natural. But since I’m saturating/distorting everything else a lot more - plus FUCK YEAH BULLHORN

- I think the contrast is making it sound more naturalistic in the mix. Particularly offset against the bullhorn.

So that’s how. A lot of different things. And a lot of takes. I’m a pretty good editor and I did takes across like five days to get all the pieces I wanted the right way. It was like, okay, this is half-singing, and half voice acting, let’s treat it like that. So I did.