I’m a bit desperate after hours trying to configure my nanoKONTROL2 in Ubuntu Studio 16.04. I’ve selected my device under generic MIDI settings but it makes no effect and nothing works (when it should do it automatically, as I understand) so I attached some images with my current settings. I can assign some controls manually like volume, R, M, S and the main playback controls, but it doesn’t let me use the knobs to manage the stereo sound balance (they work, according to the MIDI tracker, but when I try to manually assign them, they don’t seem to respond). I also don’t know how to assign the marker buttons (set, forward and rewind). Can anyone help me? 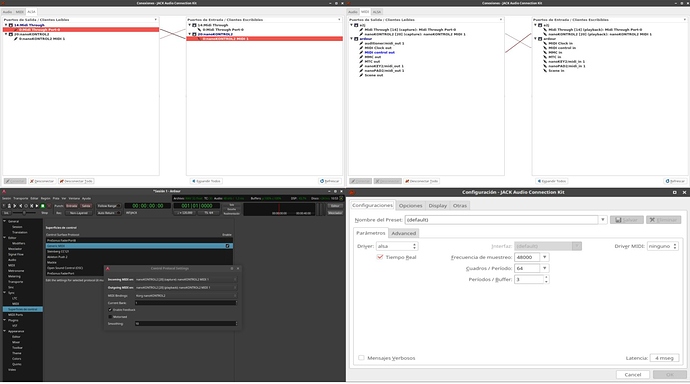 Thanks, I’ve already done that, as you can see in the screen capture I’ve selected nanoKONTROL2 in control surfaces. I don’t know what you mean by not using jack.

Hi, I remember using a NanoKontrol2 with Ardour a few years back.

I had to add “usr/bin/a2jmidid &” in qjackctl in the scripts to run at start (when using Jack, of course…), then I reconfigured the NanoKontrol.

I’m sorry I cannot remember which works the best, but the NK2 can be set in different DAW modes by plugging it with some keys pressed.

Try the combinations above, and see which one works the best for you.

Thanks a lot, that what really helpful!