Recording the output works just fine, I can get a nice clean signal path from the mixer to the computer. I just don’t know how to setup it up so multiple tracks can be recorded at once.

The mixer is an Allen & Heath - ZEDi-10FX, I forgot to mention the brand.

Do you have it connected to your computer via USB? It needs to be to do what you want.

When connected via USB, and you open your Ardour, you will be able to choose it as the input hardware. If it doesn’t show up, click the “refresh devices” button.

What you don’t want, in this scenario, is for track 1 in Ardour to have both inputs 1 and 2 enabled. If this is the case, you will get both channel 1 and 2 from ZEDi. Somrtimes you may want this, but in your case you want them separated.

Also, make sure you have any latest drivers/software from the ZEDi vendor.

“So, if your guitar mic is in channel 1 of your ZEDI, then chose input 2 on the 1st Ardour track”

“So, if your guitar mic is in channel 1 of your ZEDI, then chose input 1 on the 1st Ardour track”

BTW, as you are new to this, I have two suggestions

Very interesting 4 in 4 out USB Class Compliant device. Thanks for bringing this to our attention

I don’t have the device, but I read through the manual. You should also make sure that the USB OUT selection on the mixer is set to M1-M2-M3-M4 if you want to record all 4 mixer inputs to separate Ardour tracks simultaneously.

I think the mixer window on Ardour gives you a less confusing way to select what channel of you audio device you want to record on each Ardour track. 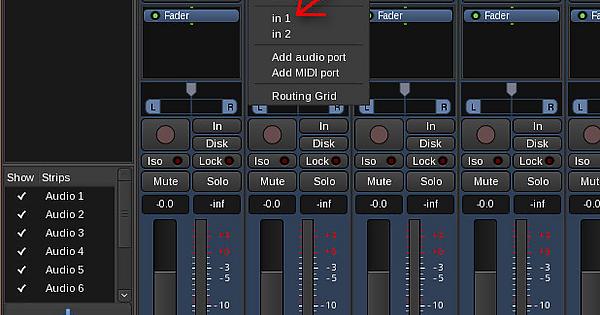 I have only two audio channels on my audio interface, so the picture only shows inputs 1 and 2, you will see 4 there.

That worked perfectly! Thank you @guitman423 for the input selection breakdown, that was pretty simple. I did have the mixer hooked up with the USB cable. Thanks @mhartzel for the additional method for selecting inputs. I should be good to go for the multi track recording.

I did notice that any effects that I run on channels in the mixer don’t end up coming through to the recording? When I preview them on the mixer with headphones, it sounds great, but the recording just receives a dry signal. Any suggestions on that?

Also, in order to get a strong signal from my SM58 vocal mics, I have to jack the gain up to +40dB. Is that normal?

Yes it is normal to have to gain up a SM58, its signal is quite weak.

I suggest that you read the manual of the device, it will make your life easier

There seems to be several busses to add the effects on the mixer: Main Mix, Aux, or the separate physical FX output.

If you want to have the effects permanently recorded with the rest of the audio, you should select USB output mode: M1-M2-Main Mix and adjust “FX to Mix” pot on mixer to mix the dry and wet signal together. Then record channels 3 and 4 of the device, these will contain the Main Mix bus of the device.

If you want to record your audio dry without effects and also the effect both on their separate tracks, then you need to select USB output mode: M1-M2-AUX-FX. Then you have the dry signal on device channels 1 and 2 and only the effects on channel 4 (probably mono). Record the dry and wet signals to separate audio tracks. Now you can change the balance of the dry vs effect after the recording if you wish.

I think what you want is the selection for “M1 M2 AUX FX”, not “M1 M2 M3 M4”. This way you will get channels 1 + 2, and the AUX and FX busses along with it, which should have your effects layered on top. Of you just do “M1 M2 M3 M4”, then you may be just getting the raw output without effects (FX). Of course, this may very well limit you to two live tracks only from your mixer.

You could also forget the board effects, record dry, then apply Audio Unit (AU) plugins to the tracks and alter your effects afterword (this is called the mixing stage). There are tons of free plugins on the Internet, and Ardour comes with some too out of the box. You can apply a reverb plugin, EQ, delay, different guitar amp simulators, just about anything you can think of. If you record reverb to your track, you can never undo it. It you record dry, you can do all SORTS of stuff to it afterword using Ardour plugins.

As for your +40db thing, toggle the button on the board that says “48v” . Does that make a difference?

Thank you for the help @guitman423 and @mhartzel! I read through the manual, but in the words of Alec Baldwin in Beetlejuice, “they read like stereo instructions.” I just don’t know anything about busses and aux sends, so it didn’t make sense to me. I appreciate the help though, I’ll give those a shot.

Hi, I’m new to the forum and I thought I would ask for advice the experts here. Hope you will help me.
I basically want to buy a mixer for recording vocals and digital piano track.
What I want to do is:

Thanks for all help
Woy