Mixer INSIDE Editor (With IMG example)

See image of MIXER INSIDE EDITOR

Right Now
You can load the EDITOR LIST with SHIFT + L, and it takes a lot of space. So why don’t you show there a mixer widget optional too?

Mixer on the Editor
Maybe you can load also the MIXER there, with SHIFT + M,
without the last 2 butons of OUTPUT and COMMENTS (see image attached) and without the ability to open new widgets or windows like in the Mixer to avoid breaking everything.
(Horizontal Scroll with MouseWheel should happen in any place over the tracks in this widget window, except over the faders of course. And should be taken in consideration this way of scroll for the main mixer, as going down to the scroll bar is hard when you are far from the monitor and you loose also time.)

Everything would be the same, and inside the Editor.

The Monitor Widget of the Mixer and others, always off in this case.

Basically is like an IFRAME of the Mixer a new instance?, but without 2 buttons and without the ability to open new things like Monitor. Only Channel Strips and Master, with Scroll Below as in the image but also scroll over places that doesn’t affect faders.

The image was made with GIMP just to show the idea.

Hope this gets implemented, as it would improve performance for people with few space or just one monitor.

The current Editor Mixer (Shift+E) and the way it works makes a lot more sense to me. I’m not sure why you would need more than the currently selected track but it might be nice to display more than one if you have multiple(s) selected.

If you are in the track 42 (The Gareus Track), and you want to go to the track 3, you have to scroll up a lot to find the track and then select the track (that is something you maybe don’t want to do) to then edit the mixer on the left.

The way i put it, you just press SHIFT+M and you have the access to the mixer (not important to go to the selected track as you have that on the left already, is for other purpose, like reaching master fast and reaching other tracks), you scroll left with the mouse wheel, and you are over the channel strip, not affecting or moving the point where you are working, because you just wanted to make a change in other track but meanwhile you are editing another stuff.

At the same time, if you want to have fast access to MASTER strip this would be much faster and better than scrolling, to the top, then click, then changing things and scroll down again to the point you was.

I think is a huge advance in the workflow. Without loosing you place in the Editor place and screen.

The space it ocuppies is the same space as the Editor List, in fact i measured the editor’s list, and made the picture with that same space, so it’s like the same place and size of window.

Quite a few DAWs give you the option of docking the mixer inside the editor window or having it be separate, for example REAPER and Logic do this. Having the option is good; I wouldn’t use it myself as I think of editing and mixing as two separate dedicated tasks and prefer to maintain focus by using a dedicated pane. But that’s just me: I know lots of people like seeing them in the same place so they can quickly make edits and mix adjustments without switching. So I like the idea of allowing it as a choice.

If you want the mixer separate, just detach it. Window->Mixer->Detach.

You can then resize it to see however much of your editor view you need then show/hide it with the usual Alt-M shortcut.

You can get horizontal scroll by Shift+scroll.

I’m not sure what you gain by embedding the mixer into the editor window?On my laptop I just bounce between the two windows with Alt-M all the time.

f you want the mixer separate, just detach it. Window->Mixer->Detach.

Yep, that’s what I’ve done for years, but I think the original poster sees a benefit of not having to hit alt-m to toggle back and forth between windows. I suppose it could save you a few hundred keystrokes over the course of a day if you are constantly going back and forth.

it could save you a few hundred keystrokes over the course of a day if you are constantly going back and forth.

Fair enough. I’ll just wait for the Neural-link update and save all the keystrokes!

If you are in the track 42 (The Gareus Track), and you want to go to the track 3, you have to scroll up a lot to find the track and then select the track (that is something you maybe don’t want to do) to then edit the mixer on the left. 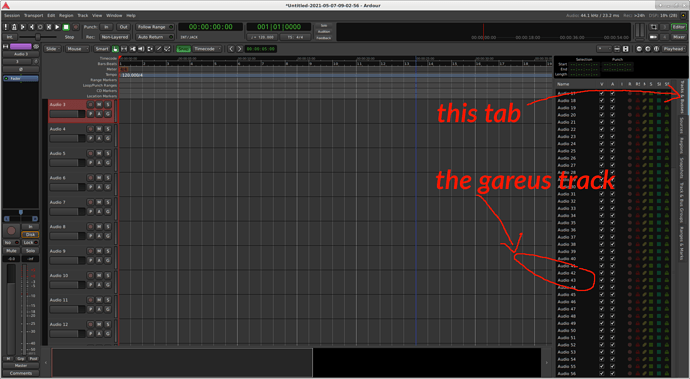 Paul appreciate your time, but i still think that not loosing focus on what you are doing meanwhile you can go to the mixer would be great, not having the possibility to have another screen or wider.

So i found a solution, with the available options.

This way you still have the focus on what you are doing, but have the mixer at hand, thanks for the other tool too, that it’s great too, but i was looking to have something to avoid jumping all over to make some changes on some specific track meanwhile working in something else.

This is the screenshot of that configuration with the available features as said above. Thank you and of course as you for sure understood, the Gareus reference was with lots of appreciation for his work and plugins too. 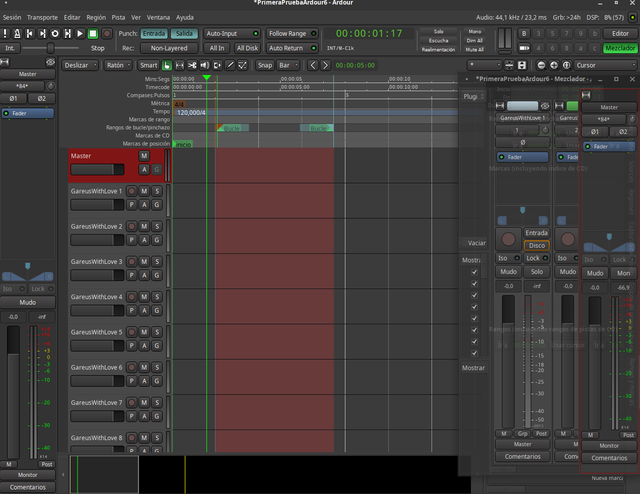 Bdp, i swear i didn’t saw you answer when i figured out the same, and took a screenshot to respond to Paul, you are right that way is amazing, and it’s exactly what i was saying. Thank you