If you recorded midi notes at a certain tempo, but decided to change the tempo of the session, the notes readjust to suit the new tempo.

But I want to know if there is a way you can re-readjust those notes back to their speed before applying the tempo change, whilst the new tempo is maintained.

Is there some sort of way in the transform tool maybe?

there’s an option to (de)couple the region from “musical time” (before changing the tempo), in the region context menu: 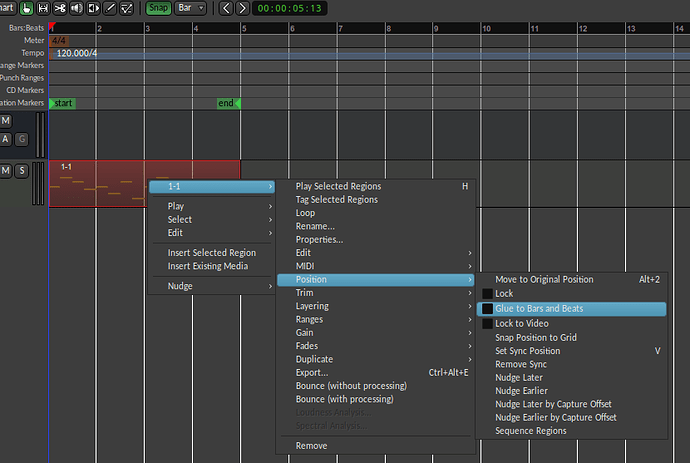 I tried this and it didn’t work. Maybe a bit more detail?

I didn’t change anything except the option shown in the screenshot.

The version I use is current ardour6, self compiled on linux, very recent github checkout from two days ago or so.

I created a region with some mouse-drawn midi notes in 120bpm, sitting on 1/4 beats, unticked the shown option, changed tempo to 80 bpm and the midi notes moved away to the left from the beats just as expected. 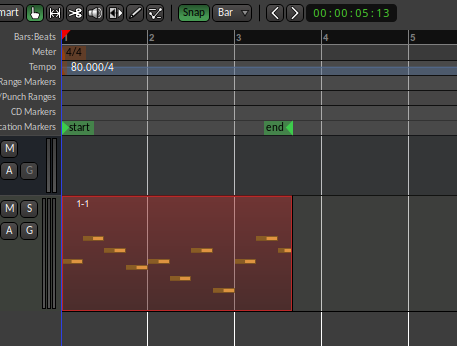 It’s not what I’m trying to achieve though. I want the notes to play at the same speed as before the tempo change.

Now I can’t follow you anymore - in my understanding that’s exactly what happens.

I call this same speed at different tempo, what am I missing?

(deleted, will reply another time).

So an option in a update would be good here.

Please post a screenshot showing the before and after state, and talk about a specific note (start and duration) and why it is an issue. Nobody who has read the thread so far seems to understand the problem you are facing.

If this is just for a particular effect you are trying to achieve at the beginning of a song, you could always bounce to an audio file, and use the rendered audio file instead of the MIDI data.