I’m working on a song using AVL Drumkits in Ardour 6.9.

I’d like to play some drumrolls / snare fills but can’t figure how to achieve that. If I put the drum notes too close together it just sounds like a machine gun, if they’re put further apart I get single staccato hits, not the flowing roll feel.

I guess finding samples of a drum roll would cost less time, but I’m curious if there are some hints and tricks I could try with what I have.

It’s probably really hard to get a good roll by placing separate notes close to each other but if you do that make sure to vary the velocity of each notes.

The same usually goes for all repetitive hits on a single drum; if you have equal-velocity 16th notes on the hi-hat it’ll sound sterile and machine gun like too.

Difficult subject indeed. How I try to get around: change velocity of hits (e.g. left hand weaker than right hand). Switch off snap and move hits a little bit around on time line.
You could also analyse a given snare roll sample w.r.t. to velocity and timing.

EDIT: Actually I most of the time use black pearl or red zeppelin. If I need other timbres for snare or kick I send the midi to an additional track with the LSP sample player and mix in voices of other samples.

You might get better results slowing the tempo and playing the drum rolls on a midi keyboard.

The AVL-Drumkits Demos on the Soundcloud page here: Stream AV Linux music | Listen to songs, albums, playlists for free on SoundCloud were all mouse programmed (in Hydrogen). What they were programmed in isn’t really important though. When you program fills it is very important for every hit to have a different velocity for 2 reasons… of course just velocity alone will give some sound variety to single samples but the AVL-Drumkits have 5 different samples per kit piece so changing the velocity changes both the volume and the actual sample that gets played depending on the velocity values and this will help avoid ‘machine gunning’. To program drums effectively you need to listen and observe how a drummer plays and as @peter.zenk said emulating a right and left hand by picking different samples is one way. Also shifting the time signature from straight to triplet time is another thing real drummers do. As an example starting a drum roll in straight 16th notes and shifting to 16th note triplets during the process of the roll can mask that drums are programmed and lastly often drummers do ‘flams’ or hitting 2 drums at the same time at slightly different times as a type of fill. When you program drums you can’t necessarily program exactly what you want to hear sometimes using the advice above you need to pick and choose techniques that lend themselves sonically to the limitations of programming. Like mastering any skill or instrument drum programming takes a lot of time, attention and trial and error to get right.

I premise that despite many tries I’ve never made a snare roll that sounded satisfactory, that is realistic, one thing however that I’ve found be very bad is to use a monophonic sampler; in my ears it sounds smoother to have each hit fade out “naturally” instead of being cut abruptly – just in case you haven’t considered this aspect, regards. (Maybe using a room-reverb could help.)

Thanks for all the input and advice!

The AVL-Drumkits Demos on the Soundcloud page here:

From these samples I sense it should be possible to achieve more or less what I want to do, but I also see TIME is an important factor here. Time and patience for trial and error…

Do I understand correctly that the different samples in the drumkits are available through changing the velocity? So sample 1 is used at velocity 1-26, sample 2 at 27-52 and so on?

Yes, you are absolutely right about that, between 0-127 there are 5 ‘ranges’ equally divided and when you select a velocity value outside of a range (either up or down) it will trigger a different sample… I should clarify that AVL-Drumkits don’t have ‘round-robin’ samples. R-R samples means that a given range can can have more than one sample to be played which potentially can give more variety of sounds within a given range. Some will argue this makes a huge difference…

In my experience it makes a very subtle difference to the end product, drum fills are challenging no matter what and round-robin can be helpful but it won’t fix ‘bad’ programming by itself… Much of the reason that AVL Drumkits have separate ‘snare-ctr’ and ‘snare-edge’ mapped keys is to emulate 2 handed fills. A real drummer doing fills will usually have one stick centered on the snare and one stick toward the edge. If you use samples from both the Snare-Center and Snare Edge keys (same with Toms) then that opens up 10 snare samples you can use in your fills just for the snare! Then you also have Tom and Tom-edge samples to throw in there too, this is why I’m personally ambivalent about round-robin, there are lots of samples there to use people just need to take some time and care in the programming.

Another thought: what is the musical intension of a specific snare roll? (Other than trying to create the illusion of a real drummer) Is it necessary to support the music as a whole? Can the musical purpose be achieved with a different method, bass guitar fill, brass samples, run over toms, you name it?

Absolutely no disrespect to AVL Drums… Just offering an alternative (why do I feel like crap doing that?)

I’m having some nice results using Virtuosity Drums (Virtuosity Drums) under Sfizz (or Sforzando, if you prefer) on my AV Linux system. They have some rolls, buzzes, and flams in there which may make things a little bit easier (this kind of drum programming is, no pun intended, a drag).

Along with that, what I’m doing is putting a drum recording that I want to emulate (find something on youtube, then download it with youtube-dl), paste that in a track in Ardour, then A/B it with your midi/sfizz track, trying to get the feel and dynamics right. It’s getting not-horrible. Good luck!

Site looks interesting. Thanks for sharing
The one thing I like about AVL drum plugins is that they have multiple outputs, so I can post-process kick, snare, cymbals, toms etc separately (like compressing, EQ, time effects …)
Without having looked into the details I assume that the virtuosity drums + sforzando do not offer this flexibility. (would like to be proved wrong)
(My other options are creating kits from single samples via LSP sampler or converting hydrogen kits for usage with drumgizmo - both have several outputs)

A few weeks ago I had a good result following this guy’s technique. In the video, he explains how to do this in Logic Pro X, but you can easily adapt it for Ardour. 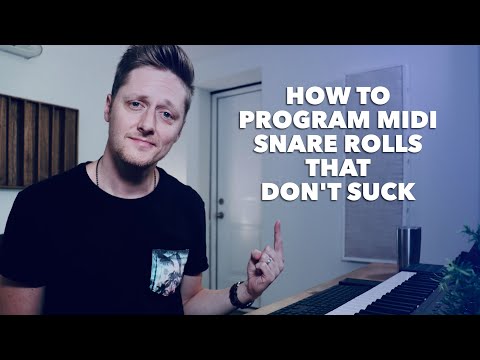 Thanks for sharing!
And the only only - really only - thing which is on my wish list for Ardor/Midi is a Velocity editor.

It’s a bit of extra overhead, but the Virtuosity Drums product (under Sfizz) has separate programs available for snare bus, kick bus, overheads, etc, so you could set up your midi track with no plugin routing to a “snare bus” midi bus, “kick bus” midi bus, etc. It’s not per-drum processing, per se, but seems more like mixing a real kit. Not too bad for free.

DrumGizmo user here, and I swear by it. The CroecelKit has a drum roll sample built in, which makes rolls significantly easier.