My 9 year old grandson is in his first year of piano/keyboard lessons. I am not a musician. I am not an audio engineer. I am an old computer scientist/engineer/programmer/admin. I have a lot of documentation read and understand. But first I’m hoping you can point me to the right software choices and basic quickstart configurations.

For Christmas, we bought him the least expensive digital piano we could find with weighted keys, a Casio CDP-135. My first goal is to be able to download midi songfiles with sheet music or extract sheet music from the midi file, and then have my grandson play along with the midi tracks.

I started with a default install of UbuntuStudio 18.10. I searched the repositories for relevant packages and installed them. Then, I had an overwhelming number of choices. I tried some stuff. Some stuff worked well, some not so much. I’ve narrowed the field to Ardour5, lilypond, and some software that runs on top of lilypond.

I have the hardware working. I can record and play midi using Frescobaldi. I can play midi using Ardour5 using the default General Midi Synth. I have not yet tried recording in Ardour5.

Why doesn’t playback stop when the playhead reaches end?

How do I change the default track name from -t-… to -?

When watching the song in the edit window, why do I hear the track and see the volume levels, but not see anything in the strip as the playhead goes by?

How do I change a track to use one of the 10 patches built in the digital piano? Do I need to configure jack for this?

Are there any particularly relevant tutorials you can point me to?

Hmm. My track names had elements that looks sorta like html and got eaten.

I want the change the default track name from songname-track# to instrumentname-track#.

Other people will be able to give you answers to your specific questions, but I will suggest that you try Musescore for the primary goal of allowing your grandson to play along with sheet music. Ardour’s primary purpose is audio production (multi-track recording, mixing, and mastering).

Eventually we will want to get to multitrack recording and mixing. But, we have a lot to learn first. It will be a long time before we get to mastering.

I thought about Musescore early on. But, at that point I had decided to restrict myself to tools built on lilypond since several of the tools running on top of lilypond look very interesting. Musescore looked nice, but seemed like it was it’s own thing. And, at first glance it did not appear to integrate well with other tools. I will take another look at it.

Importing a downloaded multi track midi songfile and importing it into Ardour5 creates are really nice working virtual mixing board. Being able to mute and solo tracks is great for learning to play the different tracks.

Ardour5 has a lot of features we will be ignoring at the beginning. And, it will be nice to use a tool that we will never outgrow and then have to start over learning a new tool.

Ardour5 and lilypond+… may make an ideal solution.

Why doesn’t playback stop when the playhead reaches end?

maybe Preferences > Transport > Stop at the end of the session

How do I change the default track name from <songfile name>-t<track number>-... to <patch name>-<track number>?

Do you mean when import MIDI files? There can be many patches on a single midi-track, so using <patch-name> isn’t an option. You can however manually rename the track after import.

How do I change a track to use one of the 10 patches built in the digital piano?

Could you please rephrase that question?

What “built in the digital piano”? – Ardour uses plugins to synthesize all sounds.

Are you looking how to use patch-changes without adding/editing one in a midi data itself? If so use the “Patch selector” in the context-menu of a midi-track header: 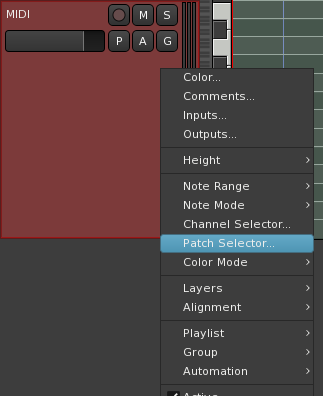 Are there any particularly relevant tutorials you can point me to?

I’m not aware of any recent good tutorials to get started with Ardour/MIDI.

What “built in the digital piano”?

Hi!
I was just studying kdenlive and made some video to check the midi signal connections through the “ALSA MIDI Bridge” in the Cadence program. I suppose, if any midi “IN” will be displayed at the Catia screen - the device must play the received signal. In my case I’ve just checked the midi indicator of the usb-soundcard MI4 (Steinberg).

@cooltehno I would not recommend to a beginner to to use JACK in the first place. Ardour/ALSA makes this a lot simpler