Hi All,
Here is what I do:
I sing a melody to a midifile (imported into Ardour), but partly, Somewhat 16 to 32 Bars. Then i stop. Than I record the next 16 bars, but to get into the rhythm I start with the last recorded bar. I listen to the last bar and start singing after that bar. Therefore the the two regions overlap 1bar. Then i record the third part again overlapping the last bar of the 2nd part an so on. In the end last region is layered on Top, the first is on bottom.
I change that so the first is on top, all further region are layered downward and the last region is on bottom. The song played correctly. But when i combine al regions to one the layering is turned back, - the first region is on the bottom and the last on top.
Am i missing something, or is that way to record partly step by step wrong? Of course it’s not a big issue, but does anybody have an idea?
thx Andreas

Can you please provide some screenshots to show more clearly what you mean?

Also, this is somewhat close to a bug report, and would better off at tracker.ardour.org …

Hi Paul, thx for the quick Answer.
I’ve been not convinced that this is a bug. But if it is so, i’ll make a bug report. Maybe i did something wrong.
First picture is ‘Layered Regions.png’. This is how the layers are to be ordered. Look at bar 21 and bar 27. There are the overlaps. Than look at the 2nd screenshot “Combined1.png”. The first and 2nd region are combined with ‘Shift + C’. The 2nd region overlaps the first instead otherwise. The screenshot “Combined2.png” shows, after combining the 3rd region, the same behaviour with bar 27. I hope the issue is more clearly now.

Finally, if you look at the screenshot ‘Messed_up_the layers.png’ you see the layered regions of the first recorded track. And i have no clue where all those grayed regions come from. The difference is, that i used for this track the internal lapptop audio interface, while i used an usb interface for the 2nd track. If you have a clue what happend with the first track, please let me know. If you think there is a bug, i am going to report it with the bug tracker. 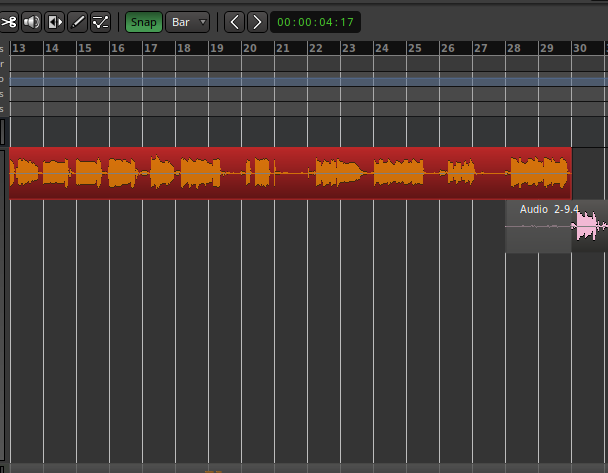 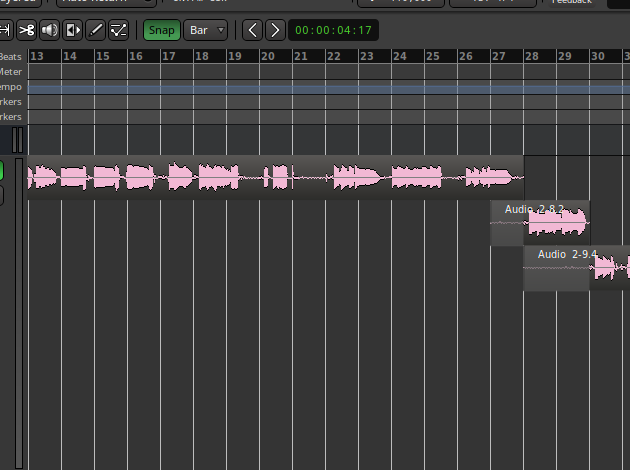 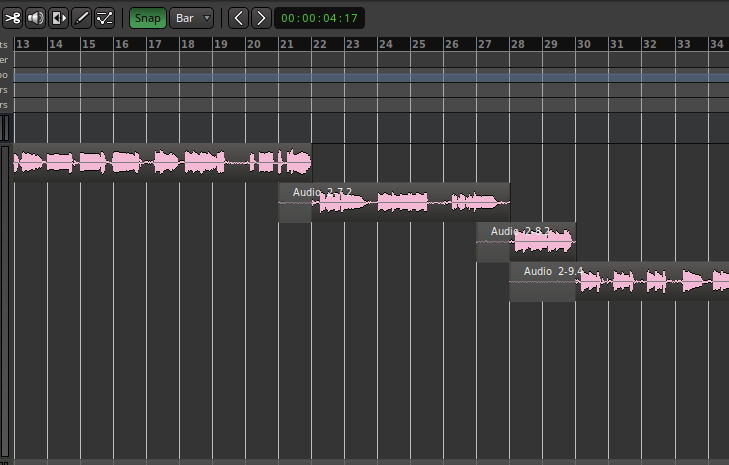 I have remembered that the “Combine” operation was almost certainly not designed to handle overlapping regions. I have not had a chance to check the code for this, but I recall never even thinking about this when I implemented it. “Combine” was intended to take regions along the timeline, either adjacent or spaced by some distance(s), and create a meta-region that describes them as a single entity.

It would not be impossible to handle overlapping regions too, but it would very complex, and I don’t think it would rise high on the priority list.

@Paul: Thx, for clarifying the use of ‘combine’. If any body has a suggestion, how to handle the described layer-recording, i would gladly hear about it.

You should probably juse use bounce. That is designed to deal with any arrangement of regions, the only difference being that it actually writes out a new audio file.