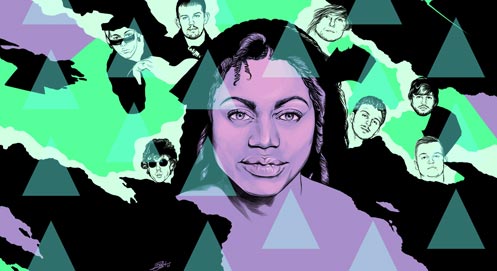 Discover amazing music and directly support the artists who make it.

All songs were recorded and mixed with Ardour + native Linux plugins.

Some sort of electric forest folk, I guess.

Thanks Glen and Michael!

Northern part the country is indeed astonishing, especially if you prefer not to see so many people around and can tolerate the company of ten million mosquitos, or alternatively, “some” chill and darkness in the winter

Anyway, I love it too, I’ll travel to north next week again.

I am listening to it right now.
Brilliant work indeed, keep it up!

Lovely work. Gotta be some mileage getting that out to compilations. Reminiscent to me of some of the putamayo world music stuff. I’d also like to hear about the instruments used/recording equipment etc. I’ll have a better listen next week when I’m no longer stuck with this ibook and its tiny speakers:).

Thanks a lot for your nice comments and interest!

In addition to Ardour, I used mainly QSynth, Hydrogen and ZynAddSubFx. Sometimes also Freebirth, Creox and other Linux apps.

The laptop is not so Linux friendly. Plain Debian Lenny 64-bit with jackd and firmware loaded from 64 Studio repos and rt-kernel from Pengutronix seems to be the only really well working option for music production here at the moment. Ok, I have only tried several Debian based distros, not e.g. Arch or Fedora.

Anyhow, this setup makes a handy mobile studio. Some guitars, bass and drums were recorded at the band room, where we have Shure PG57 mic and some others, no idea what model. Other instruments included an old melodica, violin and 70’s home organ.

Mastering was done by a pro, Joona Lukala. I don’t know what setup he used, but I think it was a good idea to let someone with fresh ears, good skills and equipment to do the job.

Here’s a pic of my setup

Sounds great, I love the arrangements…every song takes you on a little trip! Very Cool!

I repeat myself, your music is very beautiful to listen too!
Last July I visited Finland (Ivalo - Ukonjärvi) - with your music my memories live again!

Thanks for sharing and greetings,
Michael

Fantastic you could do so much with so little tech. Have you tried Jamin for mastering? I only ask because I recently got something mastered by a ‘pro’ and then had a go myself with Jamin. Granted his was slightly louder but my version was far more sensitive to the music owing to Jamin’s flexibility and my knowledge of the track.

Bandcamp is interesting too. It seems almost too good to be true in a way…

Thanks mekaniker & phoeniximago. I’ve done a couple of demos with the help of Jamin and gcdmaster, but that’s more or less the experience i have with mastering. The most important reason why I asked a ‘pro’ to master the album was that I had been working with some of those songs a lot during over 2 years and hearing them again and again had long ago started to threaten my sanity. I also tend to use too much low and too little high frequencies, even when i try to pay attention to that. Another reason was that I don’t have monitors at home. Lastly, I was curious to hear how ‘pro’ mastering alters the overall sound. Well, it didn’t do miracles, but some improvements and clarity anyway.

Now we are working with our band’s first album, perhaps it will be also mastered with open source tools.

Btw, Quentin Harley has written a manual for mastering with Linux apps. Looks good, I need to study it some day:
http://www.64studio.com/howto-mastering