I’ve been using jack_iodelay to set up my JACK server latency compensation in Ardour.

However it recently it seems to be broken:

For comparison, this is what Ardour measured for ALSA backend using the same device, same latency and same hardware loopback wire being used: 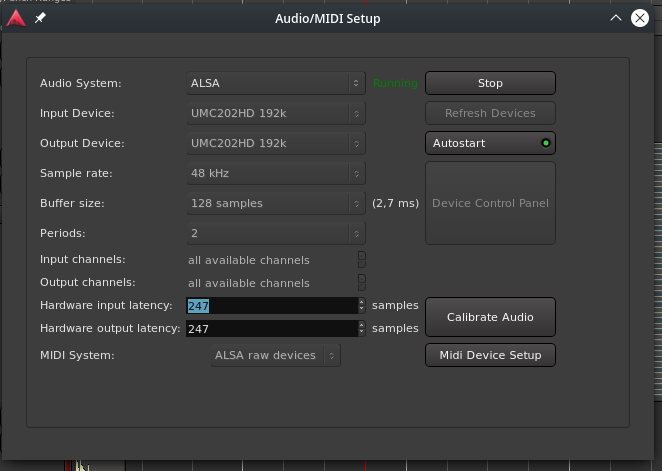 However Ardour doesn’t provide this calibration for JACK - only ALSA.

None of the Ardour developers are involved with JACK (anymore).

Thanks. I’ll report the issue there.
I wonder if Ardour’s tool was originally based on this program though?

I’ve e-mailed falkTX about this problem.

Now I’ve used the Ardour-given delay values in JACK, but the recordings are not aligned properly:

Here’s me tapping along to the click and how it looks in the grid.
I’m not a great bass player, but I can at least tap to click, and listening to the recording shows me that the recording latency compensation is off.

Now - just to make sure I’ve switched Ardour to ALSA backend, and the results are the same:

Now - just to make sure I’ve switched Ardour to ALSA backend, and the results are the same:

They look different to me, different offsets.
Is this done by recording the metronome using a physical cable? Click-out -> Track in?

You need to measure them every time with USB devices. For this reason Ardour/ALSA allows to calibrate the systemic-latency while running.

USB devices on Linux have different systemic latency every time they’re started (and every time after a x-run). This is due to additional kernel side buffering. PCI[e] and Firewire devices are not affected by this. There is a technical explanation by ALSA developer Clemens Ladisch in this thread in jack-devel. The USB driver adds up to an extra period, but at most a 24 ms buffer.

The jack_iodelay reported value seems like it has overflown a 32 bit value (unsigned integer). Is there any possibility that the measurement gives you a negative value for some strange reason (faulty cable, wrong connection in jack or something) ?

My suspicion is that the jack-tool does not ignore existing configuration, so it’s relative to the currently configured one. – or alternatively if it does ignore the config (port latency), jack2’s --sync mode is not taken into account. Those are just educated guesses though.

PS. in either case for USB devices + JACK, the best one can do is to use an average systemic latency (for a given buffer-size).

I’m on Manjaro too and I don’t have this problem. jack_iodelay reports sane numbers. I just did some tests starting jack with QJackCTL with and without latency settings (-I / -O 256) and jack_iodelay seems to totally ignore the value.

I’m guessing somehow you’re getting a negative value for the measurement and that gives you the number you are seeing. Alternatively you could try 148 for -I and -O and see if your recordings are then in sync. Negative 148 seems to be the number your measurement gets.

They look different to me, different offsets.
Is this done by recording the metronome using a physical cable? Click-out -> Track in?

No this is me taping to the click on an instrument. So small differences are most likely my human error.

Here’s me tapping along to the click and how it looks in the grid.

I could record the metronome in, but I don’t think it’d make a difference.

Alternatively you could try 148 for -I and -O and see if your recordings are then in sync. Negative 148 seems to be the number your measurement gets.

Hmm. Ardour measured 247 frames of delay for both Input and Output, so I’ve used these values. But they produce bad alignement.

Maybe I’ll reset them to 0 and try to measure again.

This latency calibration used to work great, but right now it seems to give me skewed results.

I can confirm it does not ignore existing configuration, because I have obtained similar results. The second time I calibrated with jack_iodelay for confirming that -I/-O values were correct, it reported a tinier value for -I/-O like, for instance, 27 samples or -22, but it seems that the program uses unsigned values for -I/-O, resulting in the second case in an underflow of (2^32-1)-22. That’s probably why @unfa obtained that “huge” values, because of the second measure (USB device restart, so surely different system latency) being lower, resulting in a underflow, and the program showing weird values.

My suggestion is to record the metronome in. Independently if it makes a difference or not, it will be a more accurate experiment. I am not judging your bassist skills

So, after calibrating, do not remove the cable, and record Ardour’s metronome click in a track with the record/input port you set in the calibration dialog. Also, route the click to the playback/output port.