Is it possible to have two track at different tempo?

I have to midi track using two different synth-plugins.
I’d like to have one at 74BPM and the other at 120 bpm running at the same time. You may say that it gonna be dissonnant and that’s exactly what I want to achieve (just testing, experimenting).

Is there a solution? Thanks.

Nope. Ardour has only a single tempo map.

Speaking of which, will it be possible in Ardour 6 to expand the tempo lane vertically, much like a track can be zoomed vertically? AFAIK, the marker section only zooms hoirsontally?

Sorry, no plans to make the heights of any of the “ruler” lanes be variable.

This can’t be done with two MIDI tracks running at the same time.

If you record the audio of one track at 74 bpm then change the tempo to 120 bpm and mute the 74 bpm MIDI track, leaving the 74 bpm audio unmuted you’ll hear what it sounds like.

There are certain plugins that have a ‘Sync’ toggle whether to use the BPM from the Ardour track or to use its own internal BPM(such as with some plugin sequencers). But that BPM tempo never publishes or adds a tempo mark into the tempo ruler for session, it retains its own BPM internally and separate… I think this tends to be brought up when users have plugins that perform their own internal sequencing with a sync option. If I am wrong, please correct me, I’ve been dabbling with such plugins but haven’t really done much recording with them… They provide beats-per-minute in their own plugin, and I think it takes trial&error to know what their sync option does… I suppose it can only mean the plugin to “slave” itself to the same BPM as the ardour session, and not the other way around. This is my understanding of plugins that provide this.

You can, of course, play the midi info in at whatever rate you want, it will not line up with the beat marks but that may not be a problem so long as you are not going to quantize or some other beat oriented editing later. Ardour will work just like a tape recorder (even with MIDI) if you choose to use it that way. You will not have use of the click of course.

An alternative, is to do one track first at whatever beat speed you wish, edit it as you like and then record it to audio. You can then change the BPM to another speed and record the second midi info at that speed.

This can’t be done with two MIDI tracks running at the same time.

If you record the audio of one track at 74 bpm then change the tempo to 120 bpm and mute the 74 bpm MIDI track, leaving the 74 bpm audio unmuted you’ll hear what it sounds like.

That’s almost exactly what I intended to do.

I’ll record the 2nd midi file at 120 bpm (maybe I’ll open another session for that) and save it as audio.

Yes but no, it would change tempo for all tracks, wouldn’t it?

What I want is to have to tracks with different tempo but at the same time, like when drums plays at 3/4 and the guitar at 4/4 (not exactly the same thing, but you get the idea).

It would change the tempo of all MIDI tracks.

Audio that was recorded in the 74 bpm section will still be at 74 bpm when you drag it over.

there are some digital plugins(such as discoDSP Bliss), which can do a sub-loading of another plugin to capture a sampling of another plugin… and then the issue of BPM goes away because you can then work with just the samplings that you’ve captured… iirc this discoDSP Bliss plugin can generate the over and under-tone, though it may sound out-of-tune from the real thing, the user can create as many samplings as they need to be spread across various key-zones…

This is called instrument-building… and there’s other plugins that can also do it, but they can’t do it via a sub-loading capture… There’s probably just 1 other plugin that can do it in the Linux-verse… Sample-keyzones is time consuming for all keys, but discoDSP Bliss makes it easy to do a sampling-capture of another plugin, the user can specify the length of the sampling, and can provide the note-range to sample from… A lot of users do not know about it because it’s a little hidden to getting around to, but there’s videos on line demonstrating on how to use it.

… I don’t own this plugin as I haven’t really found a use for it, basically I got interested about it when I read it supports SFZ. Despite as simple or as complex you can use it, it imho doesn’t have the FX-chain manipulation capability as Redux, so I decide to use Redux instead to apply ADSR things to my patch instruments. Bliss though is still interesting in its own class, I may decide to own a copy of it basically just for its ease of sampling-capture abilities… 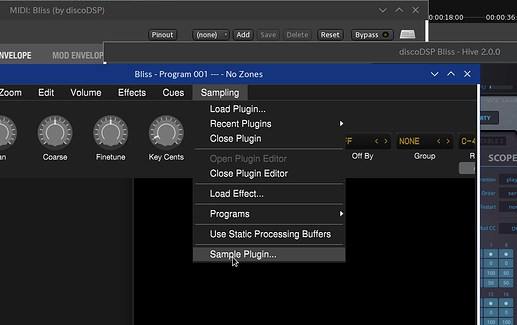 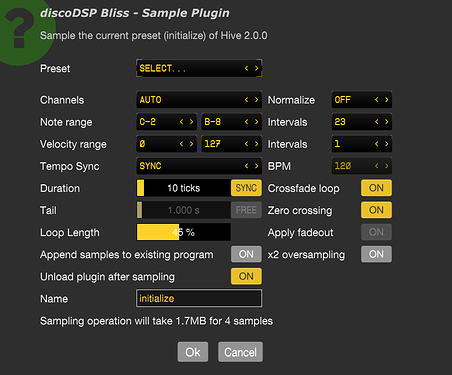 ^ take a look at the BPM setting for the capture, you can change the Tempo Sync, etc… This is the “sampling” capture setting window of DiscoDSP Bliss… And pressing ok will do “sampling” of things from the “Hive” sub-loaded digital synth plugin that was loaded. (second picture shows “DiscoDSP Bliss: Hive 2.0.0” in the background). When the sub-loaded window is open, you can manipulate the settings on it before coming back to the “discoDSP Bliss - Sample Plugin” window…

This topic was automatically closed 365 days after the last reply. New replies are no longer allowed.