Instrument signal muffled. Am I misunderstanding the chain?

I’ve been trying to get a guitar tone this morning on my Raspberry Pi 4 B + Hifiberry DAC+ ADC (which has a microphone input) without much success. I’ve A/B tested the various output speakers, cables and connectors and everything points to something within the Pi significantly affecting the signal fidelity.

The “muddy” signal is coming from my stratocaster (with the distinct clean, glassy tones) into the DAC+ ADC mic input, into a single mixer strip in Ardour 6 + jack, then back out the dual RCA outputs of the DAC+ ADC into a keyboard amp.

As I typed that previous paragraph, it became pretty obvious to me that the issue is probably with my line-level guitar coming into a mic jack, but I’m not well versed in audio engineering and signal types so I don’t really know. So two questions:

As I typed that previous paragraph, it became pretty obvious to me that the issue is probably with my line-level guitar coming into a mic jack, but I’m not well versed in audio engineering and signal types so I don’t really know.

“Line Level” guitar? Does that mean that the guitar goes through some sort of preamp? Transformer? Certainly the output from a guitar is not Line level (or line impedance). One the other hand, while microphones have a rather low level out, most of them also have an impedance that is closer to line than guitar. The average stage mic is 150ohm or so while the average guitar is 50kohm-ish. A standard direct inject (DI) box should fix that unless your guitar has a piezo pickup, in which case I would suggest a preamp made for that purpose (with a 10Mohm or so input impedance). In general, putting a low impedance output into a high impedance input will do less damage to the sound than the other way around. however, electric guitars and some ribbon mics just sound better with a preamp designed for them. So DI box for electric guitar, Acoustic guitar with built in preamp or coil style pickup. Fishman style preamp for piezo pickup with no preamp. A true line output (either consumer -10db or professional +4) may need something to drop the level for a mic input (mic as are -40db-ish) though many are designed with a level control that will deal with that just fine.

A DI box is not an option. I’m trying to run input into the DAC+ ADC as a replacement for a DI Box due to the form factor, cost and USB issues.

As far as level out, impedence, etc, I don’t really know what I’m talking about, hence my question. Boiled down: Given what we know about the DAC+ ADC board…

… is the signal muddiness I’m experiencing a result of feeding my guitar’s line out into the DAC+ ADC mic input?

Boiled down even further: Is feeding a guitar out into a mic input (on any computer) bad/incompatible? If so, why?

Extra credit: If bad/incompatible, what are my options to move forward (staying within the raspi HAT form factor)?

… is the signal muddiness I’m experiencing a result of feeding my guitar’s line out into the DAC+ ADC mic input?

Yes it is. A good introductory read on the “why” is the following article: https://www.soundonsound.com/techniques/understanding-impedance

The section “Impedance Considerations With Electric Guitars” there includes the following quote:

If the input has too low an impedance, the most noticeable effect will be a loss of high end

Ok thanks for the info.

Feel like taking a stab a the extra credit?

Feel like taking a stab a the extra credit?

https://www.electrosmash.com/pedal-pi – you could also just use the Hi-Z input stage from there.

A DI box is not an option. I’m trying to run input into the DAC+ ADC as a replacement for a DI Box due to the form factor, cost and USB issues.

Either you use a DI box or you create one inside your box as Robin has pointed to above. Most DI boxes use a transformer that is smaller than 1 inch cubed (I have some sitting here that are closer to .5 inch cubed) and would maybe fit inside your enclosure. An active guitar pre would be even better.

Sorry. I dropped out of EE dual major to focus on CS bc I loathe this stuff… Normally I RTFM with gusto.

If I’m reading and understanding correctly, it’s impossible to have some sort of small, in-line impedance “fixer” to stand between my guitar output and the mic input of the DAC+ ADC bc the mic input itself is the bottleneck. No amount of bitrate twiddling is going to help a blind man watch a movie.

Damn. Ok well I’m continuing to RTF data sheet for the DAC+ ADC but having trouble understanding. Here’s the board. 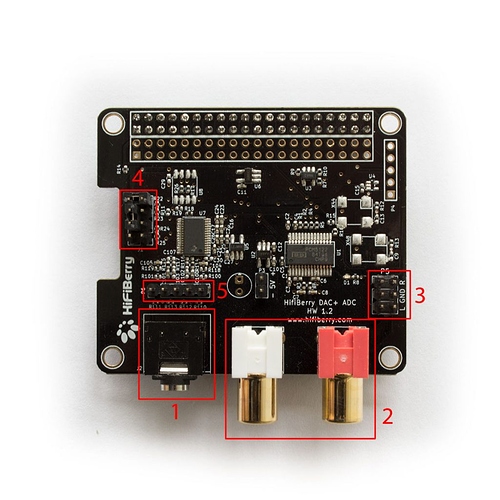 This 5-pin connector can be used to connect a balanced input (e.g. XLR or 6.5mm jacks). Pin 1 is on the left. NOte that the balanced input has to be selected with the jumpers (see below) and will always have a 12db gain. It should not be used with line-level inputs.

Sounds like that’s a dead end too as what I’m reading online is that most balanced inputs are low impedance. Why did I buy this board again?

If all of the above is correct (please jump in if not), then what I need is a DAC+ ADC with a high-impedance input, possibly with filters like the pedalpi, rather than this generic mic input.

Why did I buy this board again?

IIRC, You had already clicked “buy now” before I was able to comlete my sentence on the IRC discussion

Why did I buy this board again?

The DAC+ is an excellent board for line level audio output, but as others have mentioned it may not have both the correct input impedance and / or sensitivity for guitar pickups.

Sorry. I dropped out of EE dual major to focus on CS bc I loathe this stuff…

That could be a limitation.

Your attention is drawn to this part:

“Audio inputs are AC coupled to a gain stage built using OPA4134 op-amps. Input resistance is 100kOhm for each channel. The gain can be adjusted simultaneously for both the left and the right channels from 0dB to +40dB with an on-board potentiometer” (I have emphasised the impedance and gain spec)

But I would strongly advise that you consult with someone in a professional capacity first, especially if you are not able to verify suitability for your project yourself.

So you’ve connected a mono 1/4" guitar cable to a stereo mini jack? With an adapter? That could be a problem.

From what I read the mini jack is a line input, not a mic input. It might not be super toppy, but I wouldn’t expect it to be totally muffled, sounding as if the tone control has been turned all the way down.

You’ve probably tried this, but there are jumpers for gain, which might improve the situation.

I have build a Zynthian based guitar pedal with a Hifiberry DAC+ ADC (and I love it!)

I ended up putting a polytune 3 between the guitar and the pedal. Because it has an active buffer circuit which has an appropriate impedance on the output

So some sort of in-line converter IS possible? The guitar signal you get on the other side of this pedal, into a mic input is just as clear as a guitar into a true DI box (focusrite, audiobox, etc)? Or just as clear as the guitar directly into an amp?

To answer your question : yes, you’re misunderstanding the chain.

So some sort of in-line converter IS possible?

Len answered that above.

If you can figure out why that isn’t a particularly sensible or meaningful question, you’ll be in a better position to get a good guitar sound and keep your treble intact.

This response had absolutely zero helpful information. Sounds like you just wanted to be a dick, TBH.

What you need is a buffer circuit possessing a high input impedance, which therefore draws hardly any signal current from the pickups, but, also possessing a relatively low output impedance and therefore the ability to supply enough output signal current to drive the ADC circuitry. That way it has relatively little effect on the behaviour of your guitar pickups or the guitar’s passive tone controls etc, and your tone stays intact. That’s primarily what a DI box does.

Gain is a separate requirement and is necessary to raise the low amplitude signal from your pickups to a higher level that might be expected by e.g. the ADC. (that’s what the jumpers are for I should imagine).

The PiSound board I referenced looks like it would be more suitable to just ‘plug in and go’ as it provides both the necessary gain and likely a more suitable impedance for guitar. I have one, which IIRC worked ok with single coil Fender pickups, but, I didn’t test it extensively in that application and would advise you should check with the manufacturer about compatibility first.

If you get the concept you’ll see there are a few solutions.

Getting the concept will be more helpful than a series of boxes that don’t do quite what you want.

I’m simplifying the concept here a lot, but basically:

Because your guitar pickups and all the other elements that make up its tone and volume controls etc - even the cable to some extent - comprise a network whose behaviour changes at different frequencies, the influence on it of anything you connect to it will be felt proportionately differently at those frequencies.

In the case of something like the relatively low input impedance of the ADC / mic circuit, this can lead to, e.g. the high frequencies becoming noticeably reduced and the sound gets muffled.

A buffer circuit is designed such that it will not really be noticed by the guitar, but will easily be able to supply the signal current required by e.g. the next stage in the signal chain. In this case the ADC etc.

I tried this pedal: https://www.riffcityguitaroutlet.com/products/tone-city-comp-engine-compressor due to its

With the comp off, it was super muffled, just like going directly into the mic input. With the comp on and cranked all the way up (essentially a db boost) it seemed to help, but maybe only because of the gain (not the impedance “correction”)?

Anyway none of this really matters. I spoke with the folks a hifiberry and I think they can manufacture a version of the DAC+ ADC with a 1/4" guitar-appropriate input for me.

Thanks for all the (helpful) responses.

With the comp off, it was super muffled,

That’s because it’s a ‘true bypass’ pedal. Your pickups are probably around 6k so 10k may actually be worse.