I recently installed Ardour 3.5.357 on Puppy Linux 5.7.1. Audio recording works fine, and I succesfully installed some effect plugins.
Now I would like to do some sequencer tracks. I found that Ardour has a sequencer, and I want a plugin that allows me to play .sf2 soundfonts. I read that fluidsynth should do the job, and I installed Fluidsynth 1.1.5-2.
However, fluidsynth is not in Ardour’s plugin manager.
The effects that work are in /usr/lib/ladspa, and I found the file libfluidsynth.so and linked it there, but Ardour still does not have fluidsynth.
How can I get Ardour to find it?

On Linux, the simplest way to install plugins is from your distributions package repository.

But note that fluidsynth is NOT a plugin, it is an engine for SF* playback. You need an actual plugin that uses fluidsynth. The CALF plugins have such a plugin available. CALF plugins in general often cause problems inside Ardour, though they are getting better over time.

Thank you Paul, I have the CALF plugins and I checked all of them, but it was only effects and some organ-like instruments but nothing that would allow for loading .sf2 files, or using fluidsynth. What’s the name of the plugin that uses fluidsynth?
(some of the CALF plugins didn’t work, but they were named “reverb”, “rotary speaker” “organ”, “phaser”, and “vintage delay” so I don’t think one of those is the fluidsynth connection.

I believe it is called “Fluidsynth”.

the Calf fluidsynth plugin belongs to the so called “experimental” ones. That means, when compiling you have to use the switch “–enable-experimental” to create that plugin.

I can compile a deb-package from the latest code for (U)buntu 14.04 64bit based systems with jackd2 and Qt4. Send me a PN if needed.

@Paul - concerning your experience “CALF plugins in general often cause problems inside Ardour, though they are getting better over time”: Has there been an improvement meanwhile?

CALF plugins continue to regularly cause problems for Ardour users. Some of the issues might be improved, but overall I still cannot recommend that you use these plugins, at least not without an awareness that they could break the session entirely.

Paul, do you know if the CALF team is aware of these issues?
Has anyone from the Ardour camp contacted them to try and figure out the problems?

@peder: I’m pretty sure the CALF team is aware of the problems. There are a lot of unresolved issues on calf github. The problem appears to be lack of time and manpower. There was recently a batch of memory error fixes done, but I suspect there are still a few remaining.

Hi there, I am learning ardour and making baby steps right now. Can someone tell me in a baby language how to actually install a plugin? Currently I’ve downloaded a folder with some reverb plugins, it is called DragonflyReverb-Linux-64bit-v3.0.0 and sits in my download folder.
I’ve read the manual, but the langauge is too unfamiliar. I do not know what a “path” is.
Thank you

for example, on my system the “path” to my Downloads folder is:

the “path” on Windows computer would be: 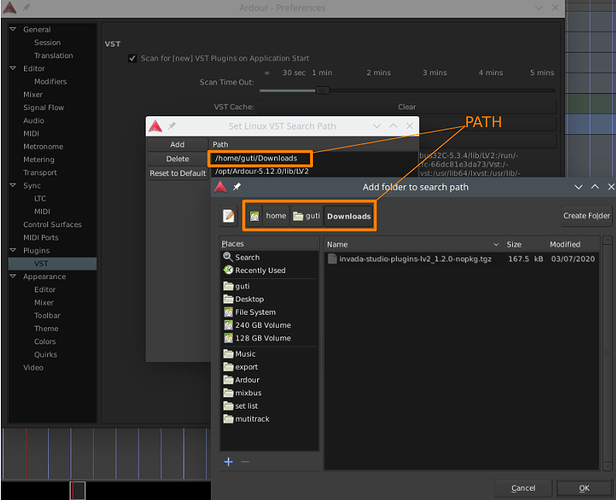 Thank you very much for your help!