How to name files for a USB-credit-card audio book

Normally we make audio books as CDs. This time we decided to try out the usb-credit-card.

The usb-card should work on all OS, in every car, in every USB-DAC. The problem is, that I dont have any of those devices - same with my friends… OK we decided to use mp3 - m4a is not very common… - also flac in an extra folder for the use on laptops…

Adding files with incremental 00, 01, 02 or even 000, 001, 002 (depending on how you split the audio book) should play fine. To be safe you could add a cue file or playlist as you suggest. I find that dragging a folder of tracks into something like deadbeef or vlc is always a good test of playback order. Setting the file manager to list files A-Z (ascending order) should also give you a good sense. With a playlist you might want to create it one level above the actual files so that it is easy to find. In a folder of 30 or 40 audio files, knowing there’s a .m3u lurking is not always obvious.

On my portable media player, I press on the first track and they all play in order. Same in the car in the days of MP3/WMA discs…

I find that dragging a folder of tracks into something like deadbeef or vlc is always a good test of playback order.

I would change that “always” to “usually.” I have an older design car player, the car is from 2011 but the player seems like it was designed in 1999. The tracks are shown in order of FAT table entry, so if you for example copy 02-track2.mp3 to a USB key then 01-track1.mp3, the player will show track 02 before 01.
I have used the FAT Sort utility on linux, it is supported on MacOS as well.
https://fatsort.sourceforge.io/
This has a list of other utilities for doing the same thing:
http://www.murraymoffatt.com/software-problem-0010.php

Just something to keep in mind for widest compatibility.

I would change that “always” to “usually.”

You learn something new every day…

@ccaudle thx o lot for your Info - thats exactly, what I was looking for, but I did not find it.

Maybe somebody can answer also the question of the renderer. I thought to use the Frauenhofer MP3 Codec, but I am pretty unhappy with the gap in the beginning and in the end of the file - https://www.sweetwater.com/sweetcare/articles/sony-sound-forge-insert-just-tiny-bit-of-silence/

If I use the lame codec from Ardour or ffmpeg, is this a compatibility problem in those older players?

and what arguments are the best in cpmpatibility? eg:

to verify the gapless encoding of lame, I did a test and there is not so much difference - less than 1 sec 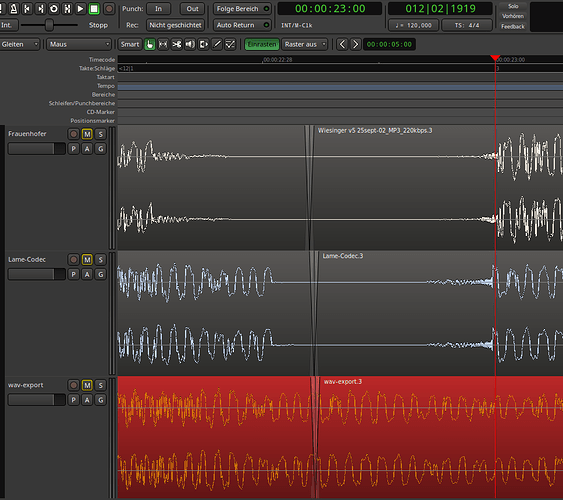 Compared to DAO Mode in CD recording, this is a huge difference.

So the question, whats remaining is, do those old devices play files with variable bitrate

What is not covered in that article, going off memory (Which is untrustworthy with me these days) MP3 has hardcoded lengths it HAS to be, and if the audio doesn’t fill that length it will have silence for a length, so truly gapless MP3 is impossible IIRC. At least that is the way it used to be, not sure if it changed or not since I last looked into it (Probably a decade ago or so)

I believe that is correct, there is no way to be both spec compliant and gapless with MP3, it is just a limitation of how the codec was designed. So there is a trade-off between allowing the oldest and simplest devices to play the files, and newer formats with better features and audio quality/size. At some point you just have to make a decision and then see how many complaints you get.

I believe that is correct, there is no way to be both spec compliant and gapless with MP3, it is just a limitation of how the codec was designed.

thx all of you for your quick help - I decided for Fraunhofer Codec with variable bit rate.

Do you think, that it makes sense to open a new thread, where I put some mp3s with different encoding to dropbox and ask, what files are played in different DAC and Car Players to get an overview for futur decisions?

Do you think, that it makes sense to open a new thread

You could but as long as it sounds good to you on your own system after encoding compared to the original hi-res recording, I wouldn’t worry too much. Anything 128k or north is going to be fine for your purposes (and you can afford to go even lower for purely spoken word). As for the playback order, I think as long as you are copying the whole album as a group, you aren’t going to run into the issues noted by @ccaudle (he may correct me on this!) particularly if you include an m3u file.

I have distributed a lot of sticks with testfiles among friends and colleagues for testing and the result is:

The renderer doesn’t matter - everything was played.

But the sorting of the files is absolutely important. Not only “old” devices are affected, but also many new ones. You really have to do it, if you want to have the greatest possible copatibility

“A file or directory on a FAT volume always has a short file name , which is the old MS-DOS 8.3 name format. It means that the name part of a filename must have at most eight characters, and its extension at most three. A file or dir can also have a long file name , which can be a bit longer than 250 characters, and supports Unicode characters. When a file name contains mixed case, or has one part that doesn’t fit in the 8.3 convention, the file has both - short and long filenames.” - quoted from http://www.anerty.net/software/file/DriveSort/ - and I also found DriveSort the best program to do this - we had to do this with 450 pieces.

And referring to gapless mp3. The explanation of @seablade is still valid - you cannot predict the gap between files. I have 18 tracks and some transitions had really no gap and some had 3 seconds, the rest was in between…