How do I monitor the effect of the MIDI sustain pedal?

I have a piano VST that I want to play from an external MIDI keyboard with a sustain pedal. Ardour records the MIDI notes and also the MIDI CC 64 data from the sustain pedal, which I can see as automation.

This behaviour is the same with all the instrumental VSTs that I have but being able to hear the effect of the sustain pedal is particularly important for playing pianos.

How do I configure Ardour so that I can hear the effect of the sustain pedal on the VST during recording?

Are you recording over an existing MIDI region that already has CC automation?

I just did a quick test, new session, add MIDI track (default Ardour’s General-MIDI-Synth), rec-arm, record and the pedal has immediate effect during recording, and later also while playing back.

Can you try this (to rule out some VST specific issues).

Rewind and recording over the section replays the old pedal data, and things get messy (using “Non layered” record mode can solve this, or simply just monitoring input)

The pedal had an immediate effect before and during recording, and also while playing back.

In my earlier session, I don’t think I was recording over an existing MIDI region that already had CC automation. (I’m still new to using a DAW.)

OK. so now perhaps try to move towards your earlier setup and see if you can break it again

I repeated the test but using third-party VSTs instead of Ardour’s GM Synth.

My immediate problem is solved, I now know to adjust the settings on my
keyboard before each session, but I am not sure why the Ardour GM synth
appears to respond differently to MIDI All Notes Off than the two VSTs that
I tried. Is it something to do with the way that Ardour handles VSTs?

Nice find! Thanks for tracking this down.

This is likely because “MIDI Panic” was never officially specified.

And sometimes also followed by

Some devices/synths already internally reset the pedal’s state when a “All Notes Off” is received, even though the sustain pedal may still be pressed. – Fluidsynth (which is used by Ardour’s GM-synth), does not do that and interprets “all notes off” literally: Only active notes (pressed keys) are affected, the pedal and controller state is left untouched.

If I may ask, what keyboard model are are you using that sends “all notes off” when it is powered on? That information may be useful to help others in case they have the same issue.

Thank you for the explanation.

My keyboard is a Roland D-10 from the late 1980s. According to the manual,
its default setting is to transmit MIDI All Notes Off messages. If the
transmission of those messages is switched off during a session, that
setting is not retained when the keyboard is powered down. To make it work
with the VSTs, the Transmit MIDI All Notes Off setting will have to be
switched to ‘off’ at the start of each session.

You could add a “MIDI Event Filter” before the VST synth (or even before the disk-writer) to plugin to suppress the message:

e.g the one from x42-midifilters: 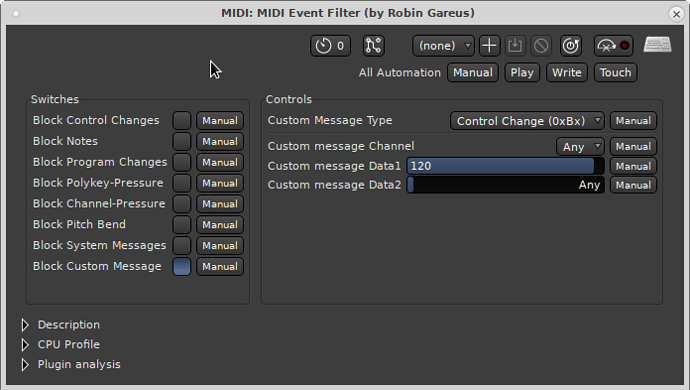 Thank you. I will try that.