How do I create continuous pitch shift?

I want the effect of a vinyl that is not moving in the beginning and then continuously accelerates to normal speed. Can this somehow be done in Ardour? How is it normally called?

You can use Steve Harris Rate Shifter from swh-plugins. Simply draw a slope from 0 to 1 in the automation lane for ‘Rate’. Adjust slope length for desired acceleration. 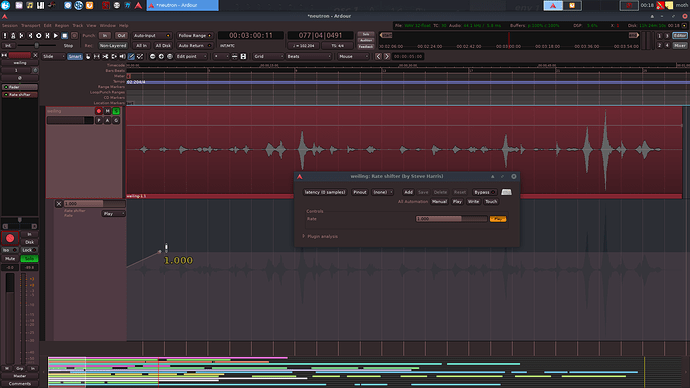 Thanks! Just tried but it doesn’t work, it seems buggy…
Also, I think that a live-plugin can theoretically not really work for this as it would have to change the duration of the region…
Or it does this pitch-shift-without-tempo-change-magic but that always sounds weird when overdone…

Short answer is that Ardour probably isn’t the best tool to do this, sadly. I would suggest a different tool, probably a destructive editor, and then importing the product with that effect on it into Ardour. What tool is best for this depends on your particular circumstances.

Thanks!
I’ve tried with Audacity as well but it only supports the magic thing, not the easy pitch-and-speed-at-the-same-time-sweep I want.
I’ve tried the other pitch shifter by Steve Harris now tho, it’s called AM pitch shifter and you can also change the buffer size. It sounds weird as expected but also pretty cool, in an it’s-not-a-bug-it’s-a-feature way

I’d still be interested if there is a tool for what I originally wanted…
Thanks for your help!

The Infamous Power Up plugin looks like it can do what you want. It’s been some time that I tried it out (when packaging it for openSUSE) so YMMV…

Good Lawd this plugin suite is just awesome. Thank you!

Hmmm… It doesn’t work for me

In theory it’s exactly what I need but in practice, when I click play, Ardour stops for some seconds (not even the playhead moves) and then it plays the thing at normal speed. Dunno if I’m doing something wrong…

Oh that’s what they mean with the “It introduces nearly 10 seconds of latency. But in a recording context your modern DAW will compensate.” part… So it can actually make the playhead lag behind…
Now I got it working, pretty nice!

Edit: But it somehow jumps to normal speed shortly before it’s done ramping up

The Infamous Power Up plugin looks like it can do what you want. It’s been some time that I tried it out (when packaging it for openSUSE) so YMMV…

Wasn’t aware of it, good to know, will have to look into it.

Contribute to grejppi/bitrot development by creating an account on GitHub.

Bitrot is great. It has only tape stop though, no tape start. Or maybe “tape stop” can be somehow combined with “reverser” to make some sort of tape start effect?

I think bitrot can do stop/start in the same plugin. Not sure tho.