How do I A/B switch between two plugins?

I can’t seem to find an A/B plugin in my Ardour interface nor did a Google search turn up anything obvious. Do you know of a way to accomplish this?

I don’t think Ardour has a built-in feature for this. Ardour’s “A/B plugins” only allows toggle bypass of all currently active plugins on a strip.

You could connect the track’s out to to two busses, then add the plugins there and use exclusive solo to A/B.

Another option would be to use pin-connections along with https://github.com/x42/xfade.lv2#fade-mode and hard-switch the A/B Control.

I’m curious how this could be added as a feature directly provided by Ardour. In particular if you want to do this programatically or automate the change.

For a proper solution, I guess some plugin like xfade.lv2 and pin-connections would be the most obvious way to set this up since this also directly allows to provide an automatable and mixer-inline control.

Thanks for the advice. I was able to use your crossfader to make it work. (See image.) The extra CPU usage running two amps (+ mono/stereo splitter + fader) sucks though. I think I’m just going to go with a drive pedal for dirt instead… after all that. 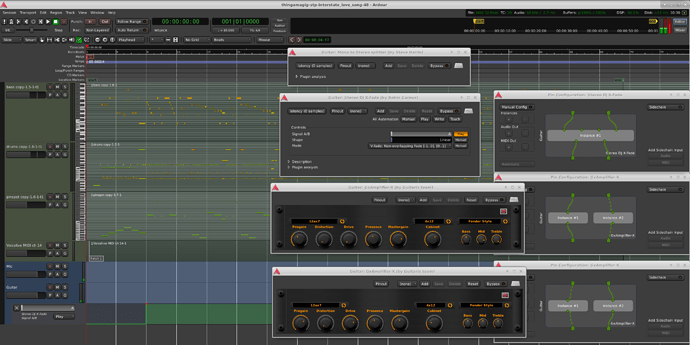 I’m glad that you got it to work.

I thought you wanted to switch between two completely different plugins. In your case with two instance of gxamp, you could simply automate their settings. – Is there a reason why you didn’t do that?