Help me reproduce my Alesis with a plug in?

Hi! While I guess this is kind of off topic, I’m wondering if anyone here can help me find something like the lovely Room 1 program of my 24 year old Alesis Nanoverb. Over the years I’ve found endless inspiration by routing voice, guitar, everything to it in my monitor mix. Here is the manual page: 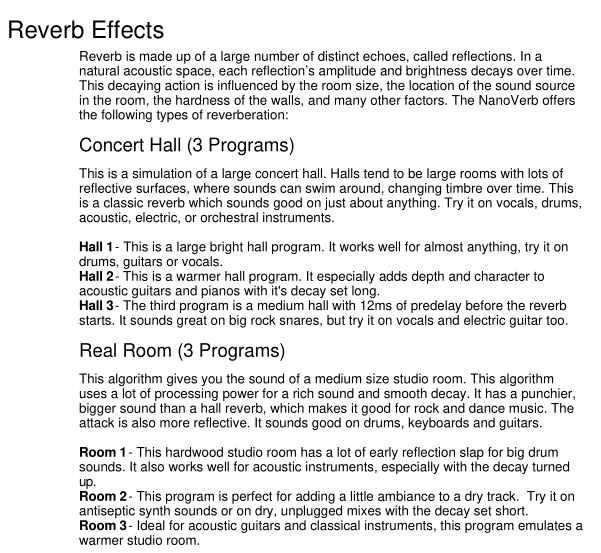 I’ve wondered if they’d mistakenly swapped descriptions for Rooms 1 and 2 because when I set to Room 1 I don’t think I hear a lot of ‘early reflection slap’. Although I’m no expert. My Room 1 setting seems better described as a lush, immersive stereo ambience – I hear no discrete echoes. It sounds a lot like the Hall programs (only that the size of the hall has shrunk).

In any case, what I have easy access to in Ubuntu Studio 20 are:

It’s difficult to coax a bad sound from the Alesis, although it may be a wrong sound for what I’m doing. What I’ve found generally from plugins so far is tinny and echoey as opposed to lush ambience. But could be I just need guidance with setting parameters?

Any advice or guidance would be appreciated. Thanks!

https://x42-plugins.com/tmp/sisel4-ir.zip directly shows up for that plugin, but the IRs also work with other convolvers. Each of the rooms was captured with 5 different settings of the “Adjust/Size” knob. 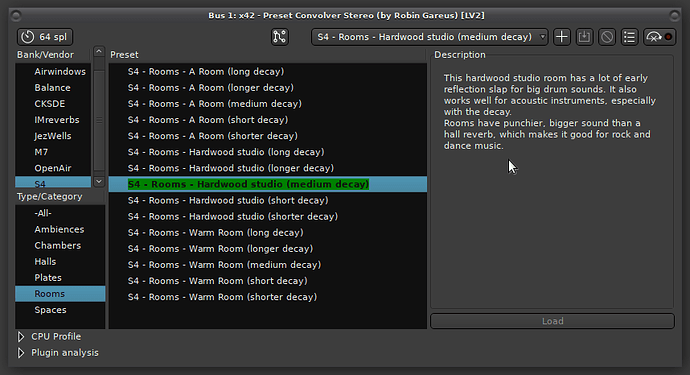 Thanks Robin this looks very interesting. Will it work with Ardour 5.12?

The plugin was written with Arodur 6 in mind (provide process threads), but yes it will work in 5.12 albeit less efficiently.

You can however use any other convolver. eg LSP’s Impulse Responses Stereo - Impulsantworten Stereo.

should that be enough to install it? After doing the above and restarting Ardour I seem not yet to see it in the list of plugins: 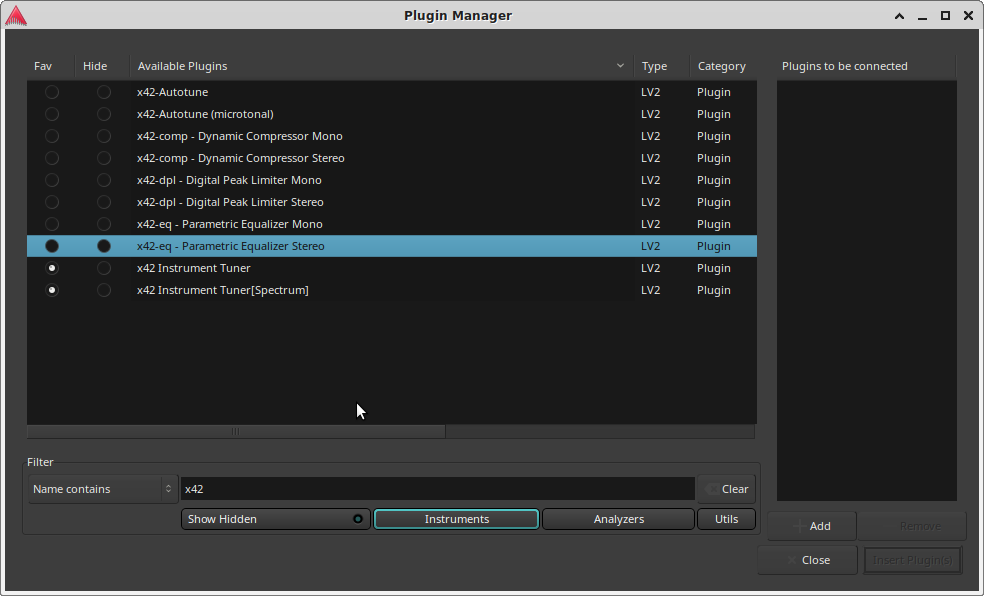 Have I done something wrong?

should that be enough to install it?

not quite. move the plugin folder up (see the included README.txt). Then restart Ardour.

Then get the IRs:

PS. There are also other IR collections available for download see x42 Zero Config|Latency Convolver - the Bricasti M7 are outstanding.

Wow! that is cool.

Anyone looking for oldschool 80s-90s reverbs, another possibility is the Schroeder type a-reverb aka ACE-Reverb. Not so much for a room sound but with gating.

That’s great! Thanks for that!

Robin (or anybody) does this look correct to you? I think I have the files installed correctly now …

But if I open the plugin manager (I’ve restarted Ardour many times) and filter by “x42” I see others of yours, but not a convolver. 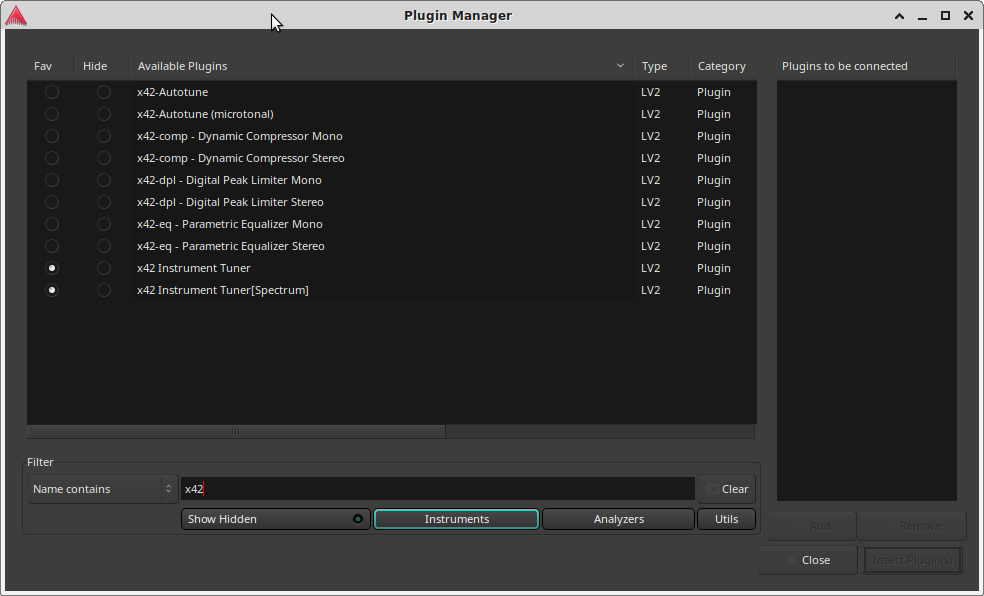 If however I filter by ‘convolv’ I can find this, but I’m not sure this is the Zero Config|Latency Convolver? I’m very interested now in being able to browse the Bricasti M7 items.

Robin I seem to have found the Bricasti presets under M7, so maybe I am onto the correct plug-in after all. And now browsing this list, it really is incredible – so many high quality presets.

I just have one final question maybe you or someone else can help with. Of this list:

do I have to ever worry that I have the wrong one of these three selected? From the list of M7 presets I don’t think I see any mention of the word stereo or mono in any of the preset names.

Yes that’s the one. The custom GUI to pick by presets vendor/type is new in Ardour 6.

I think you can still arrow-down scroll though them quickly to test listen and find some good ones.

Do I have to ever worry that I have the wrong one of these three selected?

All the IRs in the Bricasti collection are stereo output. So Mono → Stereo, or true Stereo.

There sadly is no hard rule. It depends on how the person who captured the responses recorded them.

Mono is rare. That’s mainly used for e.g. guitar-amp cabinet simulation. The openair-lib has some dedicated “source → mic” responses for some sites. That’s the only one so far.

All other libs are either stereo or mono → stereo.

Thank you so much for your help Robin. And a big thank you for all the incredible software you make available to us!

How is zconvolver related to this convolver LV2 plugin?

LV2 convolution plugin. Contribute to x42/convoLV2 development by creating an account on GitHub.

convoLV2 will be deprecated as soon as zconvolver is officially released.

could be nice to see some convolver included in Ardour. with a few good presets Alesis…