Right click on the plugin and go to Pin Connections, post up a screenshot of that here?

EDIT: Also how are you bypassing the plugin, via Ardour’s bypass, or via a bypass control in the plugin? 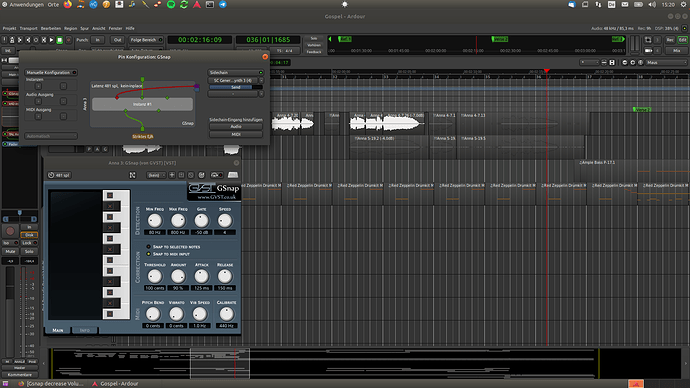 On the screenshot you can see the pin connections. I have also tried on a mono track to load only the plugin, disabled the plugin and even there the volume decreases by 6 decibels. Bypass in the plugin doesn’t exists. So i make bypass, via Ardour’s bypass.

Bypass in the plugin doesn’t exists

except it does. It is a VST2 plugin, so Ardour asks the plugin to bypass itself (effSetBypass).

Yes, it’s a Vst2 plugin. You know maybe, why the volume in the track is reduced by 6 db? Even if I deactivate the plugin…

Likely a bug in the plugin.

When you deactivate the plugin, Ardour asks the plugin to bypass itself. From Ardour’s point of view the plugin is always active and Ardour runs it like any other plugin.

How about you connect both inputs (-6dB sounds like some equal amplitude stereo split)?

Robin you are the best! That with the inputs works. Thank you so much for your help.