Grabbing from area below track lanes?

Is there a way to make the grab tool active in the area below all the visible tracks? At the moment, if I want to drag to grab media items, I can only do so from within actual track lanes. Sometimes, however, it would be great to be able to start grabbing from the bottom area and upwards. I guess a work-around would be to add an empty track below all the active ones, but if there’s a built-in way to make this happen, I would appreciate any help. Hope this screenshot might clarify what I mean: 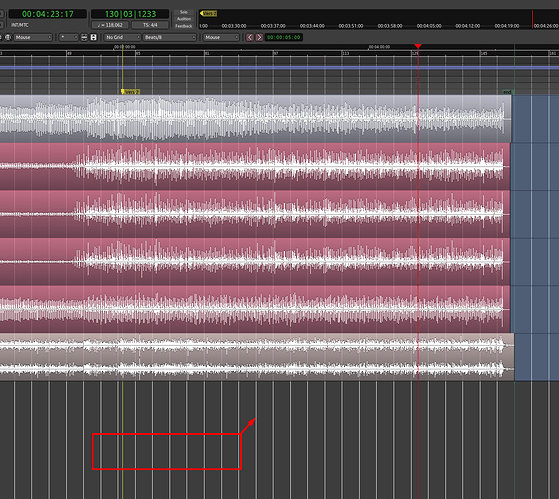 May I ask: Why would you want to do that?

Please see screenshot. I hope it explains what I mean. Particularly when editing drums, I’ve found myself wanting to just drag from the bottom area rather than having to zoom out and drag from the sides or between media items. 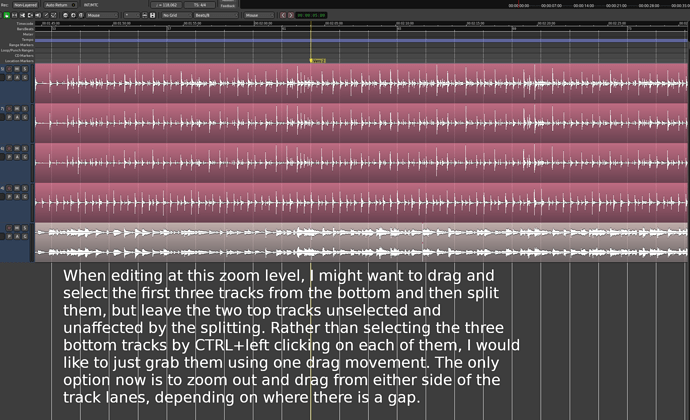 (Obviously, I mean “media items” rather than “tracks” in the screenshot text.)

How is this different from starting this rubber-band drag on the bottommost track to select regions?
What I don’t understand is why you ask for starting below, instead of the bottom-most track?

Anyway it’ss currently not possible in Ardour to begin a selection on the dropzone below existing tracks. That is inert except for drag/drop.

For selecting a continuous range of tracks, I’d select a first, hold down the shift key + click-select the last track-header (no need to ctrl-click to select individual tracks).

When at the zoom level displayed in the above screenshot (i.e. the media items span from left to right with no splits), where would I start the drag on the bottom-most track lane without having to touch the bottom-most media item? The reason I would like to start the drag motion outside of the bottom-most media item (i.e. below the last track lane) is that I do not want to risk accidentally dragging the bottom-most media item in either direction when I click-select it (which happens too often to be convenient, leaving the items more or less out of sync before I notice it and have to manually correct it.) Anyway, I’m used to doing this drag motion from below the tracks in Cubase, and thought it might be possible in Ardour too, but since it is not, I guess I’ll just have to get used to a new way of doing it. Thanks for you’re tips.

Something else that might help, all the way on the left side, where you select the mouse function, there is an option box that probably says “Slide”. If you click on that change it to “Lock” it’ll make it so that regions can’t be (accidentally or otherwise) moved around the timeline.

The only issue here is that after I have selected the items and split them, I need to be able to move them again. Anyway, I found that just adding an empty track below is a good enough work-around for me. I use the drag function to scroll left and right (dragging off screen to the left or right to move within the editor) while editing at a high zoom level as well, which is why it would be nice if the bottom area was sensitive to the drag action. For now, adding an empty track lane does the trick. I also found that Ctrl Alt clicking an item keeps it locked while dragging, but I prefer not having to use a key command or touching the items at the selection stage.

OK, that makes some sense, at least with a classical mouse (trackballs, trackpads, trackpoints etc are not affected).

Still your proposed solution to allow to start a rubber-band range selection is very specific. It only works after the last track. How would you do this if you want to select a few tracks in the middle? Perhaps we need some “lock” modifier to constrain accidental tracks. I think Ctrl+ALT+click/drag already does this. Check Preferences > Editor > Modifiers.

Yes, Ctrl+ALT+click/drag does appear to constrain the tracks. Perhaps a future solution could be the possibility to view track lanes with a certain amount of vertical space between media items. See for instance the following Reaper screenshot, which would allow for rubber-band selection of a few tracks in the middle: 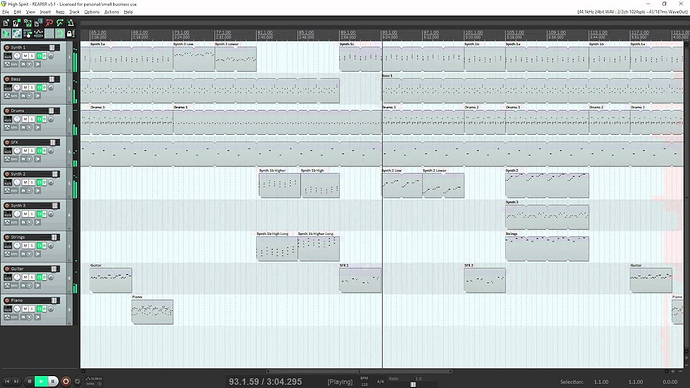