Hi all.
Ardour is a truly excellent piece of software and I’ve been using it happily for years.
It lets you do any sort of things, it’s powerful and versatile and almost unbeatable when it comes to non-linear, non-destructive multitrack editing.

I have a dream though…
Sometimes I really need to edit a waveform destructively, even after preprocessing and importing it into a project.
I think this is best accomplished by another great piece of free software: Audacity.

Wouldn’t it be great to have a region menu option such as “Open with external editor…”, or maybe “Edit destructively…”, opening a (somewhat stripped-down) version of Audacity to directly edit the waveform, then updating the project when Audacity gives it back to Ardour?

I recently ran into this video (a custom build maybe, or a mockup…): https://youtu.be/ZNTq32OlED4

Is this doomed to remain a dream?

I think there is a feature request for this already open. I’d love this too!

One problem though is that a region isn’t necessarily a single audio file, so a new file would have to be rendered first before opening in Audacity or the entire file that the region belongs to would have to be opened at the correct position.

Glad to hear this!

I know that, in fact I was simply thinking about editing the whole audio file, and then this would affect all regions based on it, but sure this wouldn’t be the best in all cases.

There may be options for this though. The program could ask the user whether he wants to modify the single region or the whole file. Or there may be two separate menu options.

I also think that the editor shouldn’t contain ‘all’ of Audacity and that it would default to export back to Ardour (and maybe only export externally as an option)… maybe also with no support for saving as .aup, since I doubt it would make sense in that case.

Sure it would be a great step!

I should perhaps note that it’s been an open feature request for more than 10 years.

Lack of developer resources, lack of existing developers viewing it as high enough priority. Like most feature requests, really.

Mmmh sure enough, I understand…
Anyway, IMO it’s by no means a minor aspect.
It would speed up the workflow in many situations. The ability to instantly switch to waveform view, and have the changes reflected in the multitrack view, is one of the killer features in - say - Audition…
I think it would stand up as a feature.
Maybe it’s time to make ourselves heard again?
Or are there some issues with Audacity’s team I don’t know about…?!
I think cooperation should be promoted in FOSS, this would lead to more integration and a better overall user experience…

I think Ardour 6 and Mixbus 6 releases achieved that. Just one example: https://www.admiralbumblebee.com/music/2020/02/25/20-Mixbus-Features.html

I think cooperation should be promoted in FOSS, this would lead to more integration and a better overall user experience…

Agreed but I think it is already happening far more than you think (just not with Audacity specifically).

Anyway, IMO it’s by no means a minor aspect.
It would speed up the workflow in many situations. The ability to instantly switch to waveform view, and have the changes reflected in the multitrack view, is one of the killer features in - say - Audition…
I think it would stand up as a feature.

I personally don’t think I’ve ever wanted or tried to edit externally in that fashion when audio is already in the DAW. All the edits I need are achieved using Ardour’s tools very easily. If we are referring to more complicated things like spectral editing I’m an advocate for treating that as a totally separate process either before even entering Ardour or as an intermediate export stage after compiling edits (but before adding plugins). The latter ensures I’m not needlessly doing edits on items I don’t end up using!

What kind of instances would you need editor integration?

My main use for Ardour is editing samples for making sample libraries. This consitutes using a lot of batch processing in Ardour to chop up files into individual regions for further editing. Having the option to open a region in Audacity to clean up imperfections (for example with the spectral editor) would be very helpful. Currently I just note the time-stamp in the source file and open it in Audacity manually to make my edits.

My main use for Ardour is editing samples for making sample libraries.

What do you see as the benefits of using Ardour in this instance versus a wave editor like Audacity, Wavosaur, Audition, Soundforge, Wavelab etc?

In recent weeks I’ve been doing a lot of sample library conversion from Kontakt/Hauptwerk to SFZ and I used Wavosaur via Wine because it was the only free editor I had access to that didn’t destroy existing markers and loops in the wav files. If I were starting from scratch I could see using Ardour to chop everything and then export individual regions but then I’d still be wanting to use something like Wavosaur for various advantages like adding in loops (or. conversely, batch removing them), editing start of files down to the sample level, batch processing of volume levels etc. It seems easier to just start in the editor and drag regions to new files. What am I missing? I ask this sincerely…

Wavosaur is proprietary and I think it only runs on Windows so two reasons it’s not for me.

I was using Reaper for years but I’m trying to eliminate non-free software from my workflow and that was the last piece.

Audacity isn’t suitable for batch editing thousands of multi-mic samples. Ardour has everything I need (with the help of some lua scripting) to split, tune, sort, rename, export. I’ve added lua scripting combined with a little C program to auto-find loops and embed them into the exported wavs. I’ll make a video tutorial about my process when I have time.

I have a few videos demonstrating my scripts. Most of these have been updated a lot since these videos as I’m constantly tweaking them 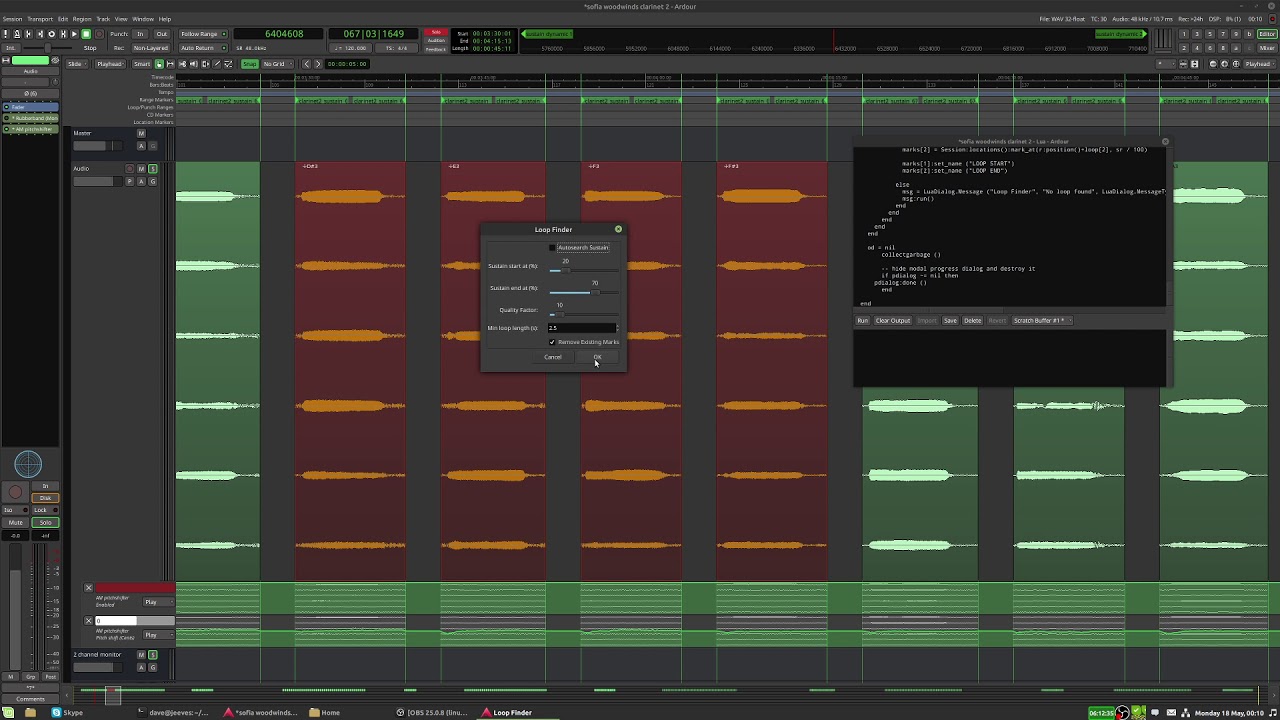 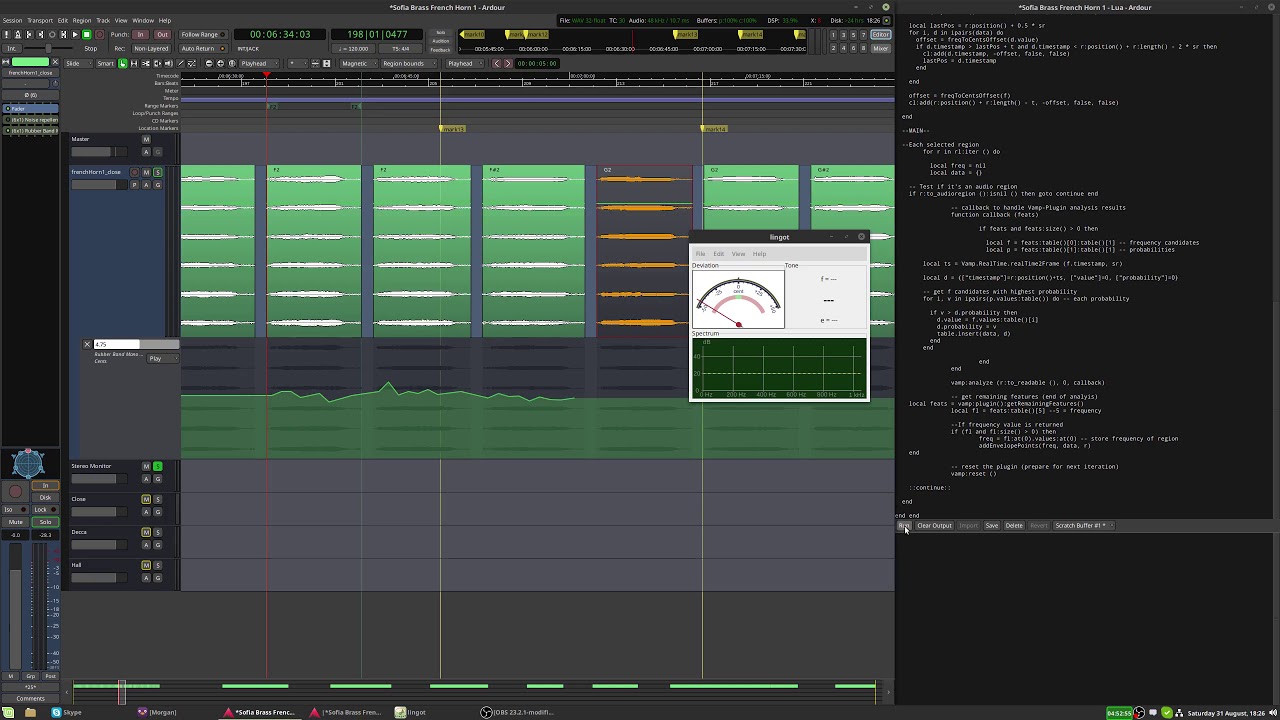 Wavosaur is proprietary and I think it only runs on Windows so two reasons it’s not for me.

Agreed that ideally it isn’t for me either. However, it does run perfectly via Wine despite its proprietary ugliness (and without needing to install). As I said, it was the only editor that respected internal loops and markers on re-saving that I could find that worked naively or vicariously through Linux

I needed to respect loops/markers when porting Hauptwerk samples to Grandorgue and being able to batch remove when moving from Hauptwerk to SFZ.

Great work on the scripts! You have definitely made me re-think being able to do much of this within Ardour.