When you export multiple files from a single Ardour session (using Range Markers), is it possible to specify a separate Track Title and Track Number for each range?

Right now when I export the three MP3 files they all share the same Track Title from Session > Metadata > Edit Metadata.

Are you looking to, for example, export a live recording with each song separated and named with a track number and song title?

This would be a bit of a hack, but until someone who knows what they’re doing chimes in, maybe it could help. Name your range markers, e.g. 1 - Witty Banter, 2 - Killer First Song, 3 - Weepy Ballad … 18 - 3rd Encore of our Hit Song.

Then when you export, select the Time Span(s) corresponding to your Ranges like so: 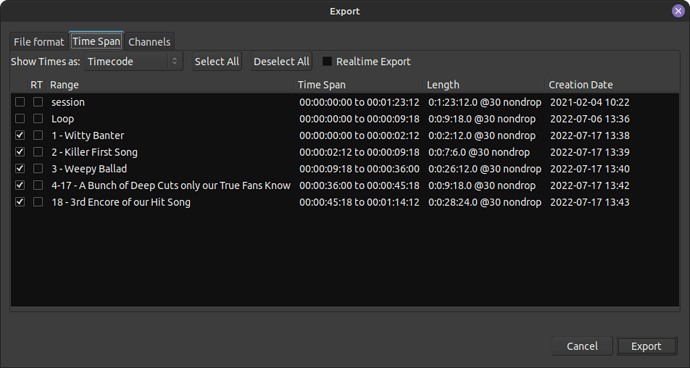 And in the Export window, export by Timespan Name: 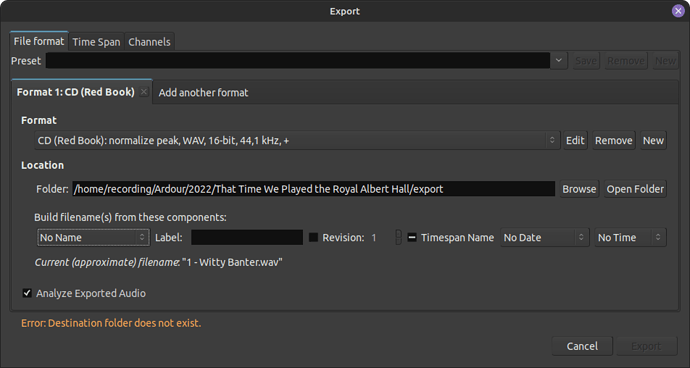 I realize this doesn’t put the info into the metadata. I suspect a more clever answer would invoke a Post Export script referenced in the “Edit Export Format Profile”. But I hope this helps get the job done in the meantime.

Thanks for the reply and pointers.

I recorded three movements in one session. Maybe its better to record each movement in a separate session next time.

Assuming the movements are all of a larger work, and the three movements were recorded in the same location, I would keep them as part of a single session. If you record into three separate sessions then you have to duplicate any EQ, compression, reverb, etc. settings from one session to the next (assuming that you want to keep the sound the same for consistency between each movement).
Learning to work with the markers will be much less work than that (at least for what I think of as typical sessions).

I looked into @befloibent 's recommendation of trying a Post Export script. I found eyeD3 which lets you edit audio meta data from the command line.

A couple things I experimented with but couldn’t figure out how to do using Ardour’s Post Export was: